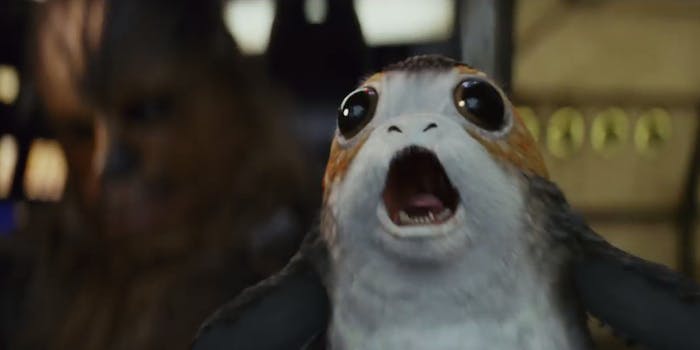 What you should know about porgs, the newest ‘Star Wars’ creatures

Porgs will be introduced in 'Star Wars: The Last Jedi.'

Star Wars is a space epic about the battle between good and evil, but for many fans, it’s the little details of the franchise that make it special. We’ve long loved droids like R2-D2 and BB-8, and now the upcoming Star Wars: The Last Jedi will bring a different kind of little buddy to the galaxy far, far away. Say hello to the porg.

What is a porg?

Porgs are a penguin-sized alien creature that’s native to Ahch-To, the remote planet where Rey finds Luke Skywalker at the end of Star Wars: The Force Awakens. Porgs have big eyes, stout wings, and orange duck feet. Instead of beaks, they have mouths with pointy teeth, and they’re covered in a downy fuzz.

Porgs don’t make their cinematic debut until The Last Jedi hits theaters on Dec. 15, but fans learned a little about the curious creatures in a Q&A with Star Wars Story Group member Pablo Hidalgo in July.

“In many ways, they’re the Star Wars version of puffins,” he said. “They build nests. They can fly. Their babies are called porglets.” He suggests they have a curious demeanor and are unbothered by the few humans who venture to their distant world. In the film, porgs will be brought to life with a combination of digital effects and real-life puppetry.

The Last Jedi director Rian Johnson is responsible for creating and naming the new Star Wars species. He told Entertainment Weekly the inspiration for porgs came directly from Skellig Michael, the Irish island used as the set of Ahch-To.

“If you go to Skellig at the right time of year, it’s just covered in puffins, and they’re the most adorable things in the world,” he said. “So when I was first scouting there, I saw these guys, and I was like, oh, these are part of the island. And so the porgs are in that realm.”

Star Wars fans got their first glimpse at a porg at D23, Disney’s annual fan convention, when a porg puppet was momentarily featured in behind-the-scenes footage of The Last Jedi production.

Since then, fans have been predictably enamored. Fan art of porgs has already started popping up, and Star Wars fanatics are emptying their wallets on the porg-related merchandise hitting stores and online marketplaces.

Though porg merchandise has been out since early September, porgs were introduced to their biggest audience yet when the newest Last Jedi trailer debuted Oct. 9 during Monday Night Football. A new wave of excitement (and a fair share of annoyance) over the little creatures erupted on Twitter after the trailer showed a porg joining Chewbacca’s roar with a warbled little cry of his own.

Lucasfilm also featured a mischievous stowaway porg in its animated YouTube series Star Wars Blips this summer. BB-8 and Chewbacca try to wrangle the little porg as he bops around the Millennium Falcon. While it’s just a cute, animated short, Star Wars loves continuity, so it also hints that porgs will make it off Ahch-To to play a larger role in The Last Jedi. (The new Last Jedi trailer seems to confirm this.) Many franchise observers have suggested porgs will offer comic relief throughout the film.

Of course, if they don’t, the porg marketing extravaganza would seem seriously overblown. If there’s one thing Disney knows how to do, it’s merchandise. But before you lament the commercialization of your childhood memories, it’s important to recognize that Star Wars has been a toy-generating behemoth since almost the beginning. Turn the clock back 30 years and fans were complaining about Ewoks being a superfluous addition to sell alien teddy bears.

Fans seem to be more accepting of these cuter, more product-friendly parts of the franchises these days, opening their hearts to BB-8 and now porgs. Yes, they’ll make Disney and Lucasfilm a ton of money, but they’re also a source of joy—and if you don’t think that’s important you should read one fan’s recent note to Johnson on Twitter.

The jury is still out on whether baby porgs will be as lovable as the adults. A Japanese toy manufacturer recently debuted a photo of three porglets sitting in a nest, and, well, take a look.

Pretty creepy, right? Here’s hoping it’s just a cheap, ugly facsimile of what ends up in the movie.