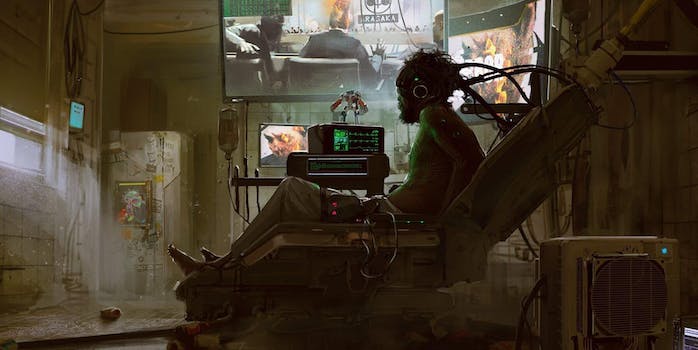 After accusations of transphobia, the game makes changes.

Cyberpunk 2077 is going to be huge, not least because it features Keanu Reeves. But along with all the hype, this game has already earned some criticism. Along with complaints about poor working conditions for employees at game developer CD Projekt Red, Cyberpunk 2077‘s teasers were accused of including racist and transphobic stereotypes.

The game has picked up a reputation for transphobia, beginning with its restrictive gender options for playable characters, and continuing with transphobic imagery in the game itself. Since the cyberpunk genre is all about people upgrading their bodies and minds through high-tech means, it resonates with many trans people, and fans were annoyed that such a high-profile game was making mistakes right out of the gate. Now, CD Projekt Red is trying to course-correct by changing the game’s character options to allow for more gender diversity.

Cyberpunk 2077 will no longer label “male” and “female” options when designing your character. Instead, you select by body type and voice, which now includes a wider range of options than we saw in earlier demos. In an interview with Metro, concept artist Marthe Jonkers—who designed the game’s futuristic urban environment—explained how the new character options work.

“You don’t choose, ‘I want to be a female or male character’ you now choose a body type. Because we want you to feel free to create any character you want.

So you choose your body type and we have two voices, one that’s male sounding, one is female sounding. You can mix and match. You can just connect them any way you want. And then we have a lot of extra skin tones and tattoos and hairstyles. So we really want to give people the freedom to make their own character and play the way they want to play.”

This sounds like a character design method that would be welcome in plenty of other games as well. It only tackles one of the issues that earned early criticism for Cyberpunk 2077 (probably because the others are baked into the game’s narrative, like the racially stereotypical street gangs), but it’s a welcome update nonetheless.

CD Projekt will post a 15-minute supercut of new game footage on Friday, so gamers can judge for themselves then.