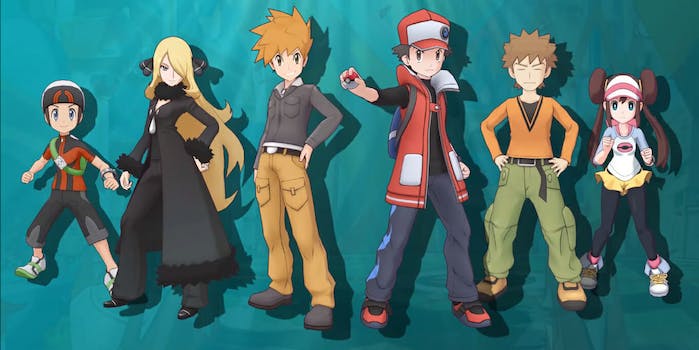 Fans are thirsty for Pokémon Masters

Pokémon Masters looks to be an updated, improved take on everything that made Pokémon Go! great.

Yet another Pokémon game is headed to iOS and Android this summer.

Pokémon Masters was announced just ahead of E3, to the delight of fans. With the mobile game to tide them over until Pokémon Sword and Shield hits the Nintendo Switch in November, Pokémon fans have a lot to look forward to this year. A new anime-style trailer dropped on Thursday, teasing the new game and all of the fresh features it includes. Fans were delighted to hear about the new game and quickly took to the internet to express their excitement with memes.

The newest Pokémon installment is being developed by DeNA and its previous titles (Animal Crossing: Pocket Camp, Fire Emblem Heroes) were well-received. In the game, trainers will travel with a single, designated Pokémon, according to Yu Sasaki, the game’s producer. These “synch pairs” will be available to team up with players, and many will include characters introduced in earlier releases. The game appears to be far more in-depth and story driven than Pokémon Go!

Battles will be fought 3-vs-3 in real time. There are new features to make the Pokémon battles more exciting, including the addition of trainer interference. According to the trailer, trainers have a few moves of their own. They will be able to heal Pokémon or increase their stats, mid-battle. In order to qualify for the Pokémon Masters League, players will need to fight battles and win badges.

Fans of previous Pokémon releases were thrilled to learn of the upcoming release and many people took note of the reappearance of beloved characters from past games.

#PokemonMasters
"Infinity War is the biggest crossover in the industry"
Pokemon Masters: pic.twitter.com/xFFKc3S9A4

LOOK HOW MANY PEOPLE ARE IN POKEMON MASTERS AND WE GET THE CHAMCE TO MEET ALL OF THEM AHHHHHHHH pic.twitter.com/R917Pn0r2R

While many people were thrilled to see so many favorites returning for Pokémon Masters, a few fans seized upon a character who was missing from the trailer. Sorry Miror B, it looks like you’ll have to wait for the next game.

Hm, well, you know who would be nice to see in Pokémon Masters… pic.twitter.com/NDbdLidXnT

Don’t talk to me about Pokemon Masters unless we bring back…him… pic.twitter.com/1TvXWHnyLn

Many people also noticed the new look that Red—a favorite from several previous games—is sporting. “So Pokemon Masters Red is finally going through his teenage angst phase with FLAMES ON HIS PANTS and I’m 100% here for it,” one user wrote.

so Pokemon Masters Red is finally going through his teenage angst phase with FLAMES ON HIS PANTS and I’m 100% here for it LOL 🔥🔥🔥🔥 pic.twitter.com/yurlaotBqf

While many fans have been looking forward to Pokémon Sword and Shield‘s arrival on the Nintendo Switch for months, the Pokémon Masters trailer quickly changed their minds. Who needs Sword and Shield when you can put all your favorite characters against one another, all from your mobile device?

Is it safe to say more people are hyped for Pokémon Masters than Sword and Shield at this point?

We don’t yet have specifics on what “summer 2019” means, but it’s safe to say that Pokémon Masters will be greeted by an eager and ready fanbase.