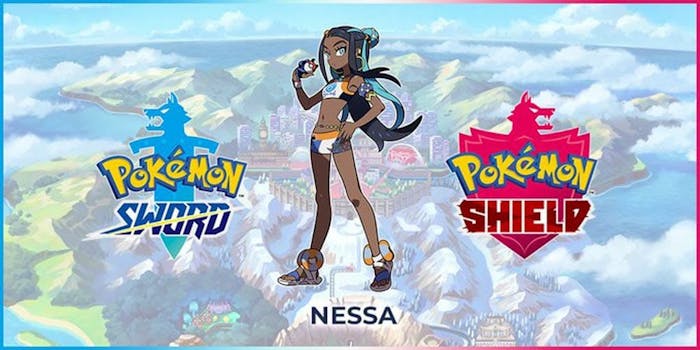 Pokémon fans got a tantalizing look at some of the new details in the upcoming Pokémon Sword and Pokémon Shield Nintendo Switch games during Nintendo’s 2019 E3 presentation earlier this month, which will be released in November.

The reveal of Nessa makes her the second confirmed Gym Leader of the Galar region, following the announcement of a Grass-type Gym Leader named Milo.

Unfortunately, it was only a matter of time before toxic gamer fandom struck, in the form of a Twitter artist who goes by @Evulart—who is known for shockingly explicit, NSFW gamer fan art. On Thursday, Evul released his latest “masterpiece,” which was an odious depiction of Nessa as a monkey.

“I know I know, color isn’t right. Will retouch later,” he wrote, as if that was the biggest problem with his piece, helpfully adding that a NSFW version was to follow.

It didn’t take long for Evul to get called out by comic artist @UpToTASK. “Imagine being a talented artist and yet you waste your gift on being a racist piece of shit,” he wrote, in a retweet with the offending piece of artwork.

Imagine being a talented artist and yet you waste your gift on being a racist piece of shit. https://t.co/g1KsPyiAqr

From there, others began piling on with comments and “get the strap” memes. “There are no talented racists,” added one user. “Not true. They have a talent for pissing people off,” quipped another, not inaccurately.

Apparently, there has been some controversy in the fan art community due to artists drawing Nessa as too light skinned. It’s unclear if Evul’s depiction was some kind of extremely misguided commentary—but clearly it didn’t hit the mark.

As an artist I’m tired of dumbasses doing racist things like this or to dumb and make excuses for not creating the character in their right skin tone because they are too scared to do so and instead end up lightening them beyond proportion.

New Pokemon trainer for the game. People kept depicting her akin in fan art as too light. pic.twitter.com/IRd6wcr1Xr

A few others offered that they reported or planned to report the tweet as harmful or abusive, but who knows what good—if any—that will do. Given the overwhelmingly negative response in the replies to Evul’s original tweet, a good old fashioned public shaming might have to do.