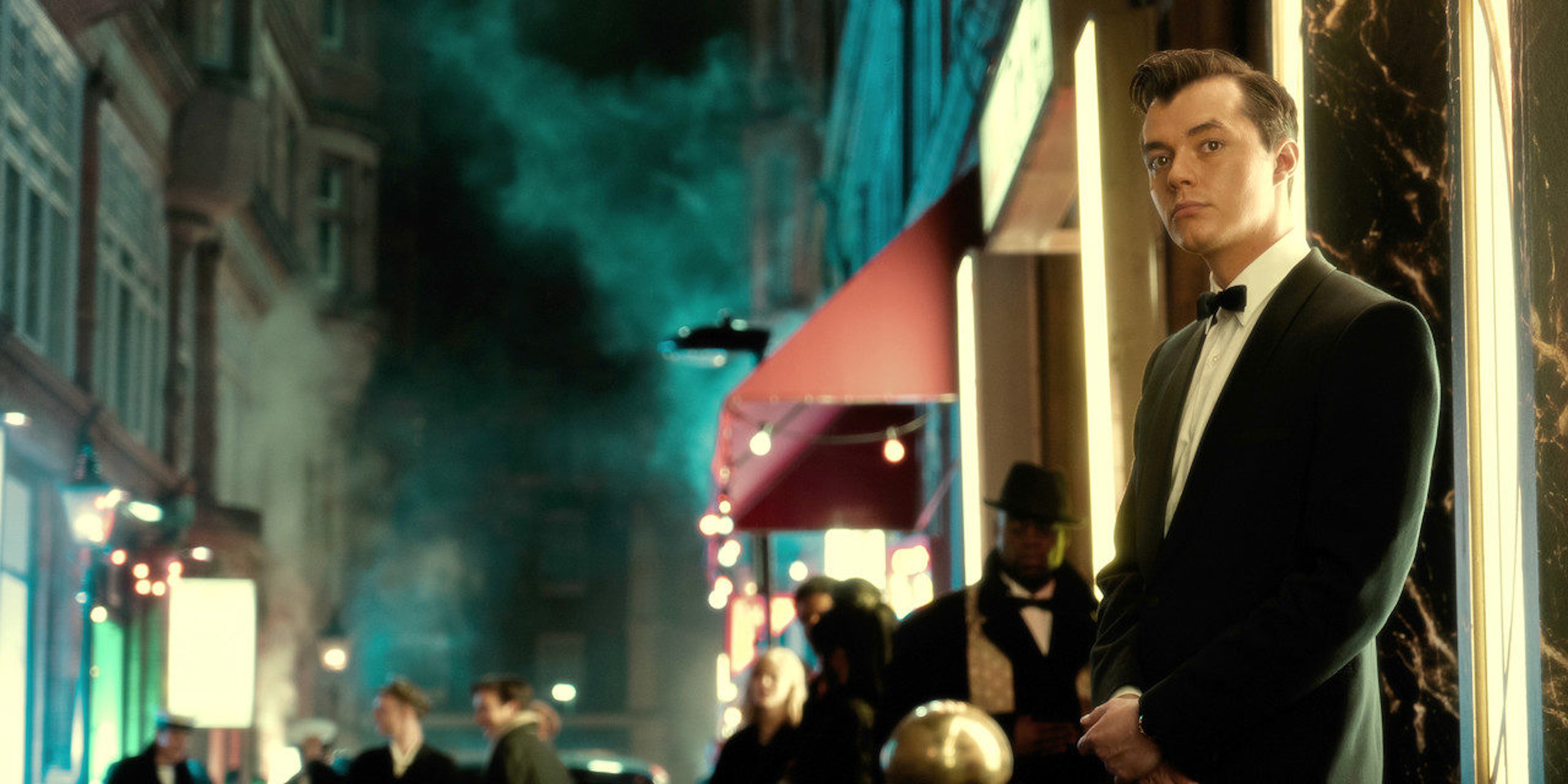 ‘Pennyworth’ is a deliriously strange addition to the Batman franchise

Starring a young version of Batman's butler, 'Pennyworth' is a witty and deliciously weird alt-history adventure.

Cards on the table: I did not have high hopes for Pennyworth. “Gritty prequel about Batman’s butler” sounds like a parody of unnecessary superhero spin-offs, but against all odds… it rules? Pennyworth genuinely rules! The script is deliciously snappy, the faux-historical setting is Arkham Asylum-level bonkers, and a sincere, likeable protagonist tempers the show’s edgier elements. Picture Agent Carter’s witty vintage adventures injected with the rapid-fire chaos of Gotham or Riverdale.

Set in the 1960s, Pennyworth introduces Alfred before he became the Wayne family’s butler. He’s a young SAS veteran who starts a security business in London, with Thomas and Martha Wayne (née Kane) among his first clients. On paper this sounds like fairly standard prequel material, except it’s clear within minutes that Pennyworth is much, much weirder than expected.

It’s also hilarious. Accompanied by a Rolling Stones needle drop, the first episode opens with an aristocratic fox hunt, interrupted by singer Paloma Faith (!) playing a criminal fixer whose Yorkshire dialogue drips with retro slang. Clad in a fur stole, she delivers a supervillain monologue while brandishing a riding crop, and then the show launches into a credits sequence full of cartoonishly morbid imagery. I’m already in love.

Pennyworth’s version of 1960s Britain is about as realistic as Gotham City. It’s a delirious theme park vision of English culture, replete with Cockney rhyming slang, gun-toting beefeaters, a cameo from Queen Elizabeth, and an alt-history concept that slowly emerges as the season progresses. In Pennyworth’s London, WWII barrage balloons still float overhead. Criminals get put in medieval stocks, and an elderly Jack the Ripper has a recurring role. Alfred works as a bouncer at a go-go club, and the show treats viewers to theatrical torture scenes in the Tower of London.

Created by Bruno Heller (Gotham, HBO’s Rome), Pennyworth is a British production with a British cast and crew, so this absurd setting is grounded in an understanding of the British class system—while also being confidently over-the-top. Just take this exchange from a later episode, when Alfred and Martha Kane (an American) walk past a maypole in the town square of a creepy English village. (For further context, Alfred speaks in a pitch-perfect recreation of Michael Caine’s accent and deadpan intonation.)

MARTHA: What’s it for?

ALFRED: Wouldn’t like to say, Miss. To a lady.

MARTHA: Pretend I’m not a lady.

This kind of malarkey is why it took a superhuman effort not to live-tweet my review screeners. Instead of introducing itself with po-faced explanations, Pennyworth dives straight into a dystopia that takes the more ridiculous aspects of English culture and cranks them up to 11. Think V for Vendetta, but with more laughs.

Most iterations of the Batman story introduce Alfred as an old man—a supportive mentor who embodies the stereotype of a discreet English butler, eternally unruffled by Bruce Wayne’s dramatic life. I was concerned that Pennyworth might echo recent Batman adaptations by being too grim and macho, but the show quickly sets Alfred up as a soft-hearted, chivalrous hero. His years in the SAS gave him deadly survival skills and grace under pressure, but while the show is occasionally brutal, Alfred himself is not. Jack Bannon—a lanky, Harry Styles-esque figure with a marvelous widow’s peak—plays Alfred as a slightly chauvinistic product of his time, with a quiet sense of humor and a stiff upper lip. He didn’t escape his military service unscathed, but he’s pragmatic about the skills it gave him. He also retains a (possibly misguided) love for queen and country, which ties into the season-wide arc.

Pennyworth offers a Batman-worthy Rogues Gallery of colorful villains, mostly connected to a rivalry between two political gangs: the far-right Raven Society, and the leftist No-Name League. Both sides run the gamut from high-level espionage to thuggish street fights, jockeying for power in an increasingly fascistic society. Thomas Wayne and Martha Kane (who at this point are still strangers) are American interlopers in this feud, meeting Alfred separately in his capacity as a security consultant.

With this kind of prequel, I always have a specific question: Does the mom get an interesting role? Pop culture is obsessed with daddy issues, but moms often get sidelined. Like Tony Stark’s mother (and Captain Kirk’s, and the moms in dozens of classic Disney movies), Martha is a virtual nonentity in Batman’s life, while Thomas Wayne looms large. So I’m very happy to report that Martha gets a cool role here, and after watching five episodes, I still can’t predict what they’re going to do with her and Thomas.

The young Martha Kane is an idealistic adventurer, but she’s more nuanced than a hypercompetent Strong Female Character archetype. She’s trained but inexperienced, highlighting the difference between Alfred and his civilian friends. At 26, he’s already a 10-year veteran of various unspecified battlefields, giving him a strong stomach for violence and a desire to avoid it if possible. Lacking that life experience herself, Martha is more gung-ho, clashing with Alfred’s old-fashioned desire to keep women safe on the sidelines.

Pennyworth achieves a rare balancing act here: The show isn’t sexist in itself, but its hero displays a period-appropriate level of mild sexism. Alfred’s girlfriend Esmé (Emma Corrin) has an even trickier role. As a normal person who gets dragged into her partner’s dangerous lifestyle, she could easily become a one-note damsel in distress. Fortunately, their relationship is compelling and fast-paced, further complicated by the class divide between his East End roots and her posh background.

Bet Sykes (Paloma Faith) and Lord Hardwood (Jason Flemyng) are Pennyworth’s standout villains, playing into the Batman trope of being totally unhinged. Harwood is a wealthy politician whose ongoing arc is lurid enough for an especially gory Victorian penny dreadful. Meanwhile, Bet Sykes is obsessive and whimsically vicious, falling somewhere between Buffy the Vampire Slayer’s Drusilla and a Dickensian villain. As you can probably tell from the trailer, Bet is queer, and some viewers may see her as an example of the predatory lesbian trope. I didn’t personally find her offensive (in fact, she’s one of my favorite characters, and Faith is a delight), but your mileage may vary. At any rate, she’s not the only queer character in the show, and her sexuality is a minor element of her story, since her most important relationship is with her sister Peggy.

With minimal connection to the Batman mythos, Pennyworth comes with a sense of joyful freedom—freedom to get enthusiastically weird, and to have fun with self-indulgent music choices and ostentatious production design. If I were to assign one reaction to this show, it would be a disbelieving shriek of delight.

Pennyworth debuts on July 28 on Epix and will stream internationally on Starzplay.