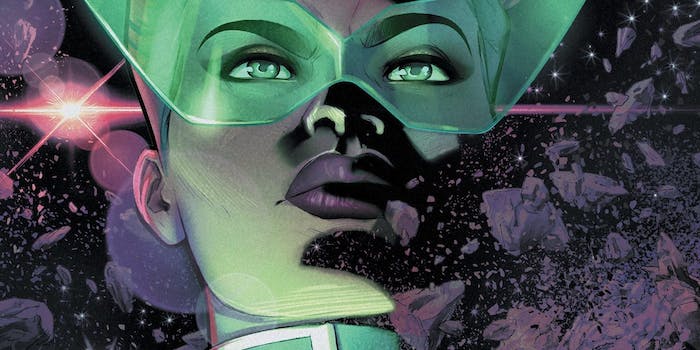 With a brand new hero and setting, Campbell and Jemisin had a lot of creative freedom for rich and thoughtful worldbuilding. In issue #1, Jo Mullein arrives as a lone human visitor to the City Enduring, a futuristic metropolis that’s home to three alien races: The Nah, the @AT, and the Ke-Topli. Centuries ago, these three former enemies chose to make peace by ridding themselves of emotion. They still use emotional expression to communicate, but inside they feel nothing at all. This reduced the murder rate to zero, which is where Jo Mullein comes in. A former NYPD detective, she’s called in to assist the local police force. Like all Green Lanterns, she’s armed with a Power Ring, but for now, Far Sector is more of a sci-fi mystery, introducing an imaginative new world.

We spoke with Campbell and Jemisin about their vision for the comic, which was originally pitched by Gerard Way for DC’s Young Animal imprint, home of offbeat titles like Doom Patrol and Shade, the Changing Girl. They discussed the City Enduring’s vibrant worldbuilding, the Green Lanterns’ role as police, and why science fiction is more about the present than the future.

Daily Dot: You introduce a lot of interesting worldbuilding right off the bat, especially the idea that no one feels any emotion in the City Enduring. How do you go about creating characters who aren’t motivated by emotion?

N.K. Jemisin: It’s kind of a science fiction staple. Straight out of Star Trek, really. I wanted to play with that old classic science fiction trope. That was actually from Gerard Way’s initial idea, that this would be a world without love. Me being a psychologist, I was like, oh no no, love is too tied in with everything else, if you want to get rid of just one emotion that’s not gonna work. So I wanted to talk about how body language and things like that are still emotional, even if you aren’t feeling anything.

Daily Dot: You mention Star Trek, and obviously there are other sci-fi things like Equilibrium that have similar ideas. This comic feels very distinctive—were there things you drew from those other sources, where you were like, we want to do this, or we want to avoid this trope?

Jamal Campbell: In our first discussions, Nora [Jemisin] mentioned how she didn’t want everything to just be flat in terms of the characters being non-emotional. Like no emotion in their faces, having restrained body language. We still wanted to portray their wants and motivations clearly. This isn’t a culture where they never had emotion. They had emotion in the past, so we’re still going to see those vestiges. It’s a very alien thing, very off-kilter.

For me personally, because their body language and their quote-unquote “showing emotion” is very communicative, I wanted to try this thing where if you see two characters together, they’re gonna show that. But if they’re on their own, they’re not. If you look into the background of the book and see any characters by themselves, they do have that dead expression that you would see in typical sci-fi work that takes on this idea. Whereas if they’re communicating with someone, they’re gonna show that because that’s just what people do.

Daily Dot: Could you tell me a bit about the design process for the three alien races? There’s a really fun mix of sci-fi and fantasy in there, including the fashion choices even.

Campbell: Shawn Martinbrough did the initial concepts for both Jo and the Nah, the first one of the alien species, so I based my initial designs off what he did, and also what Nora laid out as her initial ideas. The Nah having the tail and the fins and the ears, and then the Ke-Topli being these bulbous plantlike people.

So, for example, the Ke-Topli, they are predatory in nature so I imagined them being slightly bigger than everyone else. They’re very unnerving and menacing, and also they are the species who are going to have the most clothing because they have the most to hide. I imagine one of the main things is they don’t want to be perceived as predators, even if they are that in the foodchain. So they’re the most covered up, the most decorated, whereas the @AT, they are digital constructs so they can be the most out-there with their design choices. They can have things that won’t make sense physically, like having an accessory floating. It’s very much taking the ideas that Nora laid out, how the species’ histories lined up and how they evolved and set themselves in the social structure, and how that would make sense for their fashion and their design.

Daily Dot: The Green Lantern Corps are often described as space cops, which has different connotations from a lone superhero who is working purely for their own sense of justice. How would you say the Green Lanterns differ from our perception of law enforcement here on Earth? Is there a tension between a lone character like Jo, and the wider power structure of the Corps?

Jemisin: I’m still getting fully educated on Green Lantern, so this is reflecting my rapid 101 level understanding. I know different artists and different writers have had different takes on the issue of them as a metaphor for policing. I’m not the first one to depict a Lantern as the lone sheriff on the frontier, and I’m not the first person who’s sort of interrogated the fact that they are a large organization. I really just wanted to tinker with it in both ways.

Science fiction tends to actually be about the present; it’s not really about the future. I’m a Black woman, and I’ve grown up partially in New York City where there have been a lot of incidents with the NYPD and the Black community. Jo is a Black woman who was an NYPD officer. I wanted to dig into my perception of what police should be and compare that again to the reality of what police become when they’re not well-trained or when there’s corruption. And really that was it. Jo is trying to find her ideal.

I also wanted to dig into the concept of what happens when you’re part of a large organization that’s had some issues with people like you specifically, and you still believe in the concept of criminal justice and an organized police force. You still believe the police can be good, but your own experiences have started to make you a little jaded about it.

Daily Dot:  You mentioned you’re kind of getting started looking into the whole vast Green Lantern franchise. Were there any particular comics you took inspiration from, or did you both look to other media outside the DC universe more?

Campbell: I definitely was outside of DC. I am just a huge sci-fi fan—specifically of cyberpunk. I got my inspiration from things like Blade Runner and Ghost in the Shell. It just sort of came naturally. But also I like to scour the internet and Tumblr and Pinterest for cool images. Whether that’s sci-fi art or weird human architecture or concept cars, I do that naturally so I just have this folder on my computer of all these random images.

Daily Dot: What should readers look forward to over the next eleven issues?

Jemisin: Basically there are things afoot in the City Enduring, there are conspiracies within conspiracies. There isn’t a whole lot I can say beyond that though.

This interview has been edited for clarity. Far Sector #2 comes out on Dec. 11.