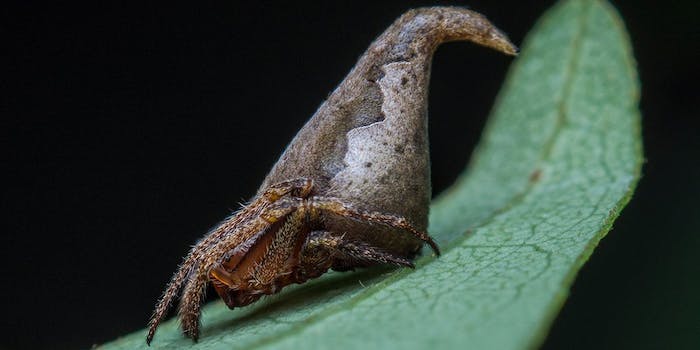 Ron Weasley would definitely not approve.

One of Hogwarts’ founders (and a magical item he created) have inspired the name of a new species of spider.

In a paper published in the Indian Journal of Arachnology, Javed Ahmed, Rajashree Khalap, and Sumukha J. N. have dubbed a “cryptic, dry-foliage mimicking araneid” spider Eriovixia gryffindori on account of how much it looks like the Hogwarts Sorting Hat when viewed from the side. It’s even easier to see the resemblance when placed side-by-side with the magical hat.

E. gryffindori was found in “the unique ‘Kans’ forestlands of central Western Ghats, Karnataka, India.” The paper describes E. gryffindori’s unique features and showcases its ability to camouflage itself with its surroundings such as dry-foliage.

The paper also remarks on the etymology of the species, which is derived from Godric Gryffindor, the Hogwarts founder who created the Sorting Hat.

This uniquely shaped spider derives its name from the fabulous, sentient magical artifact, the sorting hat, owned by the (fictitious) medieval wizard Godric Gryffindor, one of the four founders of Hogwarts School of Witchcraft and Wizardry, and stemming from the powerful imagination of Ms. J. K. Rowling, wordsmith extraordinaire, as presented in her beloved series of books, featuring everyone’s favorite boy-wizard, Harry Potter. An ode from the authors, for magic lost, and found, in an effort to draw attention to the fascinating, but oft overlooked world of invertebrates, and their secret lives.

Ahmed let J.K. Rowling know of the spider’s name over Twitter, although it’s not the first creature to get its name from the Harry Potter books.

As much as it looks like the hat, we’re still not letting it on our heads.