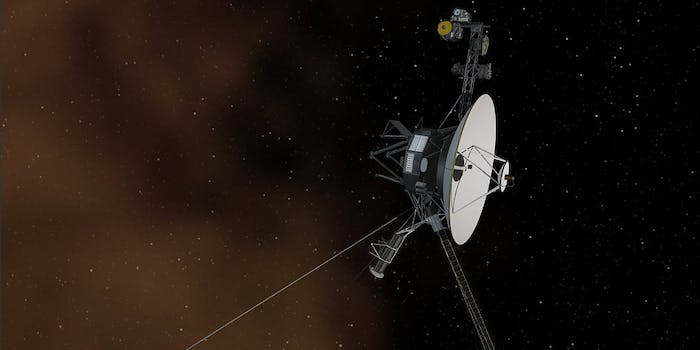 Do alien races use social media? NASA may answer that question by beaming a social media message into the far reaches of space next month.

In honor of the 40th anniversary of Voyager 1, mankind’s farthest-reaching spacecraft, NASA invites citizens of Earth to “send via social media a short, uplifting #MessageToVoyager and all that lies beyond it.” After a vote—and input from the Voyager team of course—one special message will be selected for NASA to beam into interstellar space on the 40th anniversary of Voyager’s launch, Sept. 5, 2017.

The few rules that NASA has outlined include a 60-character limit, the inclusion of the #MessageToVoyager tag, and submissions must be in by 11:59pm on Aug. 15, 2017. This allows time for the people at NASA to pick their favorites, which will then be put to a public vote to choose the winner.

The Voyager mission is the longest continually operating space mission, not to mention Voyager 1 is the most distant man-made object that exists. The Voyager vessels were the first space crafts ever to identify their own problems and take corrective action, and the Voyager 2 is the only spacecraft to ever fly by Jupiter, Saturn, Uranus, and Neptune.

These incredible accomplishments are deserving of commemoration, and the first social media message to be beamed into space is a very 2017 way to do it. NASA has been working to get the word out via its own social media accounts.

What a long, strange trip it’s been! Check out mission highlights from the first 40 years https://t.co/ADsLgjcuwa #Voyager40 pic.twitter.com/tBmo5q5WxE

I'm proud to be your ambassador, Earth. Looking forward to your message! https://t.co/voyY9jMfja

There are already a few submissions in, so don’t dally too long if you want to be considered. Some are uplifting and profound, and others are, well… less so.

You carry our dreams, as you sail boldly among the stars. #MessageToVoyager

We, the children of the stars, are learning to stand. We are patient, inspired, and our imagination is boundless #MessageToVoyager

Dear Aliens, we're sorry about Donald Trump. Most of us aren't that stupid. Please don't destroy us. Sincerely, Humanity #MessageToVoyager

Visit our amazing planet to enjoy pizza and Game of Thrones! #messagetovoyager

Nothing like the promise of Game of Thrones to encourage a visit from an alien race.