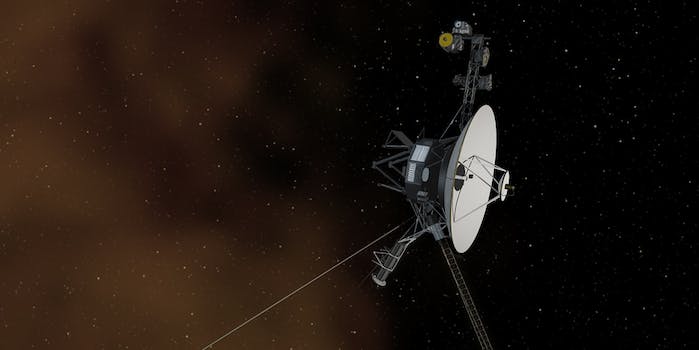 Next stop: a massive comet field.

Last year NASA announced that the little probe that could, launched 36 years ago, was traveling through the plasma that makes up the space between stars, a feat confirmed after researchers analyzed the differences in its readings of a large solar eruption compared to previous data.

Now, with readings from another solar event, researchers said they can confirm Voyager 1 has indeed left the heliosphere, “a bubble of charged particles surrounding the sun that reaches far beyond the outer planets,” according to NASA.

“Normally, interstellar space is like a quiet lake,” Ed Stone of the California Institute of Technology in Pasadena, Calif., the mission’s project scientist since 1972, said in a statement. “But when our sun has a burst, it sends a shock wave outward that reaches Voyager about a year later. The wave causes the plasma surrounding the spacecraft to sing.”

Voyager is now an estimated 19 billion kilometers from Earth—the farthest human-made probe and the first to travel into interstellar space—but it still has not left the solar system. To do that it’ll have to get past a “final halo of comets surrounding the sun,” according to NASA.