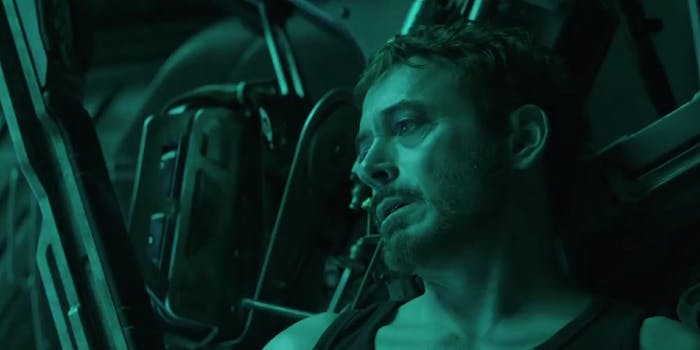 Thor is helping, too.

Tony Stark, Marvel’s resident Elon Musk-like leader of the Avengers, is in a bit of a tricky situation. As we learned at the start of Avengers: Endgame’s trailer, Stark and Nebula are stranded in space, and oxygen is running out.

Hey @NASA there’s a ship stuck in space, the “Benatar” it’s occupying two heroes who we need to defeat the Titan “Thanos”. Their names are “Tony Stark” also known as “Iron Man”, and “Nebula”, we’d be grateful if you used your vast resources to rescue them because

Me, knocking on NASA’s front door and asking if I could borrow a ship to go save Tony Stark pic.twitter.com/TaMr18sspw

ppl be mentioning nasa to save tony stark omg pic.twitter.com/ovJiPP8bod

Now, NASA is on the case.

On Sunday, NASA tweeted Marvel and said it “heard about Tony Stark.” The Amerian aerospace administration stressed that Marvel should listen for “Avengers, we have a problem” from mission control. Failing that, NASA recommends “ground teams use all resources to scan the skies for your missing man.” That includes you, Bruce Banner.

Hey @Marvel, we heard about Tony Stark. As we know, the first thing you should do is listen in mission control for “@Avengers, we have a problem.” But if he can’t communicate, then we recommend ground teams use all resources to scan the skies for your missing man pic.twitter.com/zavXrsPljq

Omg nasa!!! You do understand how important Tony Stark is!!!
This might be the coolest tweet I've ever seen!!!
Find himmmm. Please!!!

At the very least, it seems Thor is on the case. The photo is littered with cute Easter eggs, too, including a purple dragon that would perfectly help find Stark.

Use that dragon to find Tony stank pic.twitter.com/fAEMKrj1Zq

Hopefully, no one is distracted playing Galaga.

Avengers: Endgame is set for April 26. Here’s hoping NASA is able to get Stark back home next year—and maybe replace Elon Musk with him.