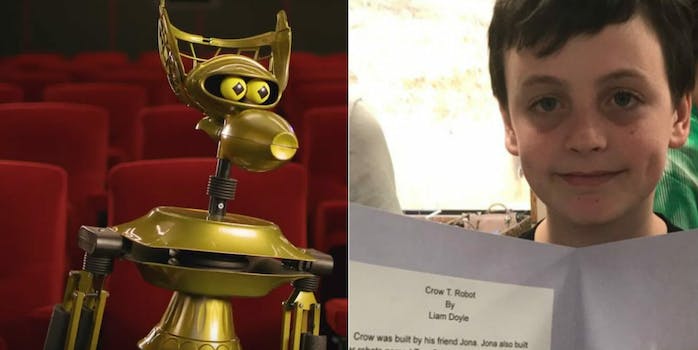 If you desperately need proof that there’s still some good in this world, look no further than Liam Doyle.

The fifth grader was recently assigned a report on robots, and instead of choosing the latest lettuce-farming robot from Japan or NASA’s space-faring Curiosity rover, Liam followed his heart and chose beloved movie-roasting bot Crow T. Robot from Mystery Science Theater 3000.

And it’s not just Liam’s excellent choice in robotic pals that warms our hearts, it’s the contents of his report.

Liam suggests that human host Jonah and his robot pals make fun of classic B movies like Creature from the Black Lagoon so the movies are “not so scary.” It’s a rational that never really occurred to us before, but through the eyes of a fifth grader, it makes perfect sense.

Fans of the classic MST3K series (before the recent Netflix reboot) will be tempted to point out that it was actually original host Joel who built robots Tom Servo and Crow, but we invite you to shhhhhhh—just enjoy this kid’s adorable homework assignment. A whole new generation is learning about the joys of roasting old sci-fi flicks, and it’s giving us some badly needed hope for the future.