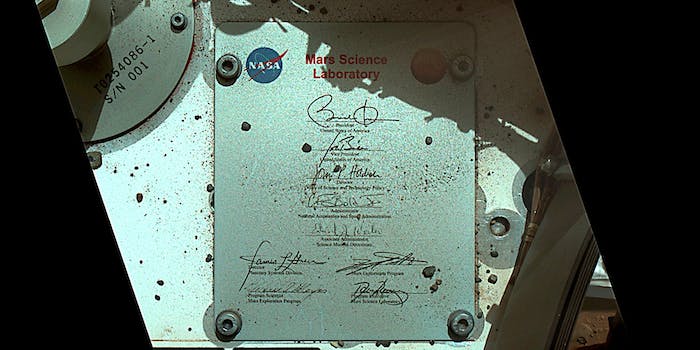 And the president had the best response on Twitter.

As the end of his presidency approaches, NASA gave President Obama one final parting gift from millions of miles away.

NASA’s Curiosity Rover, which has explored and documented Mars since it landed there four years ago, tweeted out a photo of its deck taken on Curiosity’s 44th Martian day in 2012. It’s a photo of Curiosity’s deck, which has a plaque attached to it with the signatures of Obama, Vice President Joe Biden, and other U.S. officials.

As NASA notes, it’s not the first time a lander platform sent into space contained the signatures of the president and vice president at the time of launch. Spirit and Opportunity, two other rovers sent to Mars in January 2004, contain similar signatures.

Obama set a goal last year for the U.S. to send humans to Mars and return them to Earth by the 2030s. While we’re still along way off from achieving that goal, one part of him did make it there. Obama—who’s been curious about space since he was a child—was floored by the reveal.

That is out of this world. Thanks, @NASA. https://t.co/R8CSjAwt2E

We see what you did there.

When @POTUS talks about your work, but it’s also a dad joke https://t.co/cE4eQ7ljfT