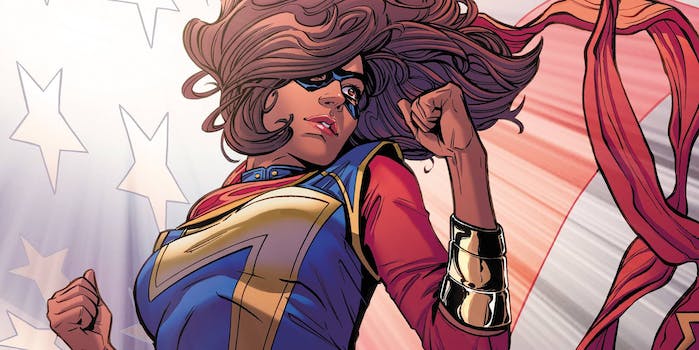 Kamala Khan has become the hero a lot of people need right now.

Many of the protesters who attended Women’s Marches around the world on Jan. 21 looked to Leia Organa as one of pop culture’s beacons of hope. Now some fans are taking inspiration from another hero in protests that emerged this weekend.

@GWillowWilson Pretty excited to be taking some Ms. Marvel with me to march today. Still no sign, but Kamala and E Burke are a start! pic.twitter.com/OH0Nutuswx

The ongoing series written by G. Willow Wilson and edited by Sana Amanat centers on Kamala Khan, a 16-year-old Pakistani-American and superhero fangirl living in Jersey City, New Jersey, who gains the ability to shapeshift after encountering Terrigen Mist. It shows Kamala as a high school student, a superhero (and later an Avenger), how she interacts with her close-knit family, and even how they practice their religion. The comics have been praises by critics and fans alike for their positive representation.

Kamala Khan, who has stressed the importance of voting, has been previously used in street activism and political fanart. But more Ms. Marvel art and posters started to appear as thousands descended upon U.S. airports and protested in cities across the country.

One of the most prominent pieces of fanart to emerge online is from Phil Noto, an illustrator who repurposed his artwork for Civil War II #0 so that Kamala was ripping a photo of Trump instead of Captain Marvel.

Noto later told fans and admirers that his post wasn’t meant to be an official response to the protests, and it’s one that Marvel wouldn’t be able to endorse. He praised the Ms. Marvel team and has said he has some other ideas in the works that will be “easier to get out/print and won’t get me fired.” (Marvel CEO Ike Perlmutter has donated to Trump previously and is reportedly joining Trump’s staff to advise on Veterans’ Affairs.)

Fans used illustrations from the comics of Kamala leading the charge or channeled her to illustrate how they felt. On some of them was a simple message: “Resist.”

My favorite protest signs are the ones that feature Ms. Marvel. pic.twitter.com/fNUITb2Lw7

Others created fanart of Ms. Marvel in support of the protests and showcased Matt Stefani’s fanart that shows Ms. Marvel punching Trump.

I can't even find something to say. #MuslimBan pic.twitter.com/B3YwC630qX

My art of Kamala Khan (#MsMarvel) is to express my position as I have stood by idly for too long. Stand against the #MuslimBan & battle fear pic.twitter.com/KFM17CoCXL

✨ dealing with neo-nazis and donald trump, a guide by kamala khan pic.twitter.com/ZVlN3rg0Lp

After today's events, it felt appropriate to paint Kamala Khan in hopes to inspire others to stay strong & never give up hope.I'm with you❤️ pic.twitter.com/gKFhtslYXp

Wilson even started to share some of the posters after initially resolving not to—and she has promised not to hold back in telling Kamala’s story.