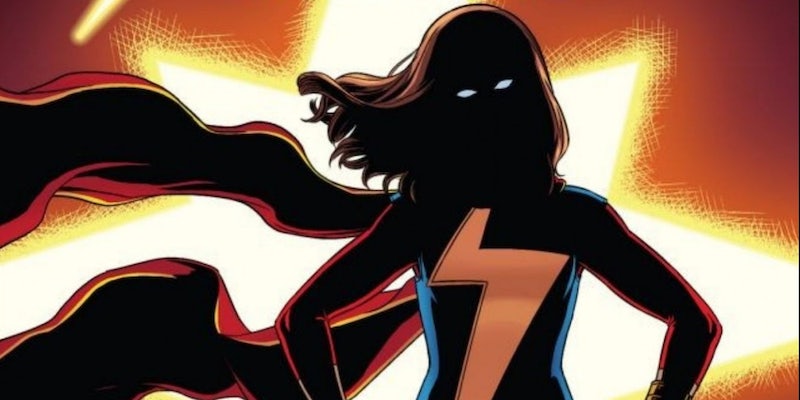 Why you should be reading the new ‘Ms. Marvel’ comics

She's smart, muslim, and one of the most relatable new characters in comics.

When Marvel announced that the new Ms. Marvel would be a 16-year-old Pakistani-American named Kamala Khan, the news quickly went viral in the comic book world and beyond. The character was a big step toward increasing diversity in comics and fans jittered with anticipation for the February release of the first issue.

In just days, it jumped to the top of the company’s digital sales chart. Khan, officially the first Muslim character to headline a solo title at Marvel, made an instant impact.

Since that first comic, two more Ms. Marvel issues have been published. They’ve given us some insight into what we can expect from this new hero, and from what we’ve seen, it’s definitely worth checking out.

Editors note: Possible spoilers for ‘Ms. Marvel’ Issues 1 through 3 ahead!

With just three issues out, Ms. Marvel is still introducing us to many of the characters that will be recurring in Kamala Khan’s life in New Jersey. These introductions give the comic a slightly slow pace at first, but they also draw you in as you learn what roles these relationships will play in the development of Khan’s superhero persona. By the end of Issue 3, it looks like we’re ready to head full-stride into the narrative.

Though much of the news on the release of this series focused on Khan’s faith and cultural diversity, that’s not the most important thing you need to know as you dive into her world.

What you do need to know about the new Ms. Marvel is that she’s one of the most relatable superheroes ever to grace a comics page. In these first issues we learn that, like most teens, Khan feels like a bit of an outcast and wants to fit in with the popular kids at school. She clashes with her family about all the normal things teens argue with their parents about, from spending time around boys to going out to parties. Of course her faith adds an extra layer to these family relationships and it’s clearly important to Khan’s identity. It plays a role in making her feel separate from her peers and adds to her struggle to discover herself, but it’s all brilliantly interwoven thanks to the great writing of G. Willow Wilson and fantastic art by Adrian Alphona. 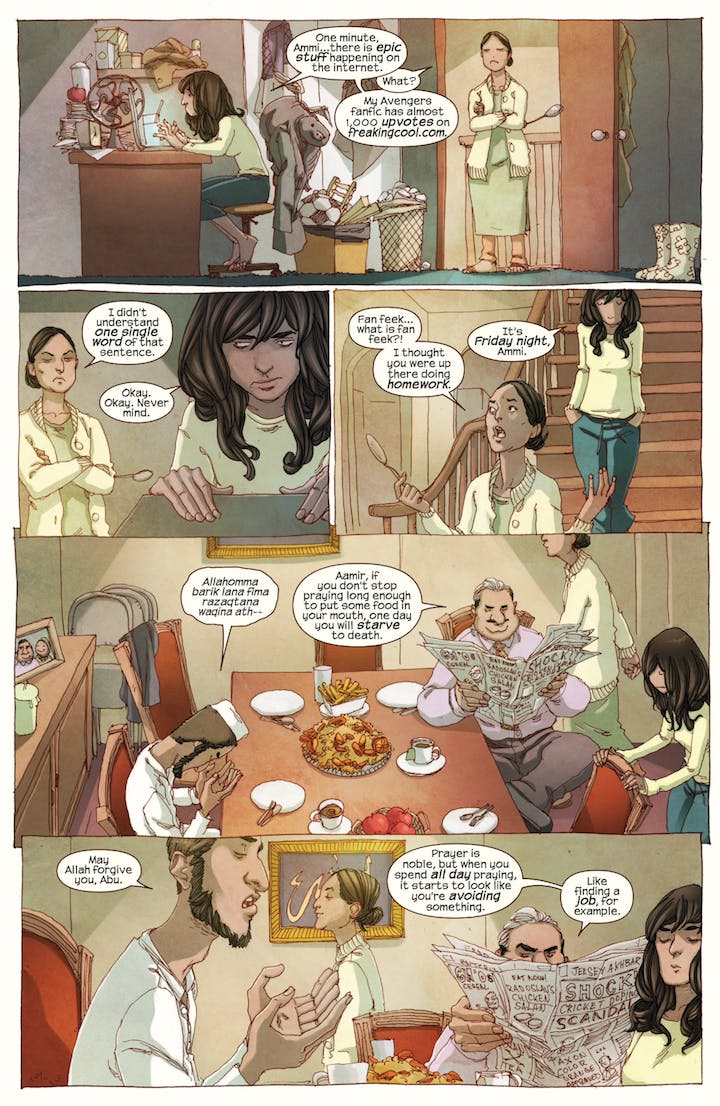 We quickly discover that Khan is a big comic book fan just like us. She has a major geek obsession with the Avengers and even writes fanfiction about them. She wants to be just like her hero Captain Marvel (a.k.a. Carol Danvers), and imagines that joining up with the Avengers and becoming a hero would be the key to figuring out who she is. She’s a great representation of a teenage comics fan, which makes her likeable and entirely relatable.

When we finally see Khan get her powers, the ability to shapeshift isn’t all it’s cracked up to be. It’s hard to control and at first it only happens when she feels uncomfortable and wants to hide from those around her. Khan is a smart girl though, and she’s already well on her way to figuring out how her powers work. She tests her abilities, even applying physics to see what she can do. 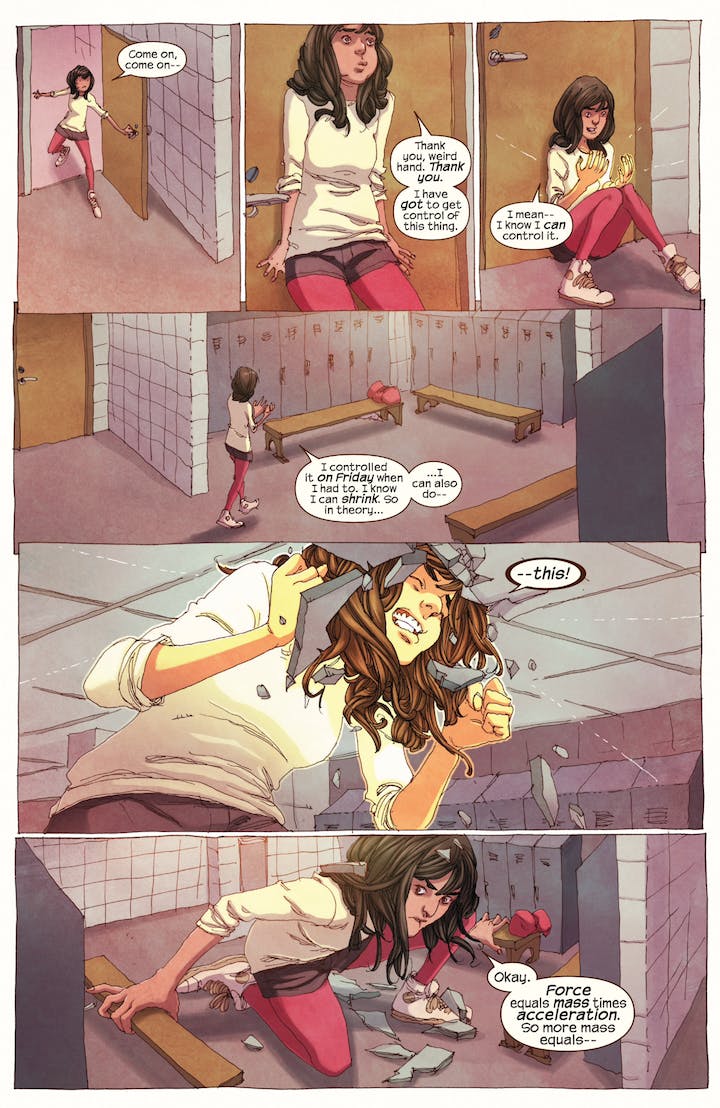 Her first transformation is jarring, as she turns into the blonde-haired Danvers version of Ms. Marvel who was her hero growing up. Hopefully this won’t last too much longer so we can see Khan in her own element, but first she clearly needs to come to terms with being a hero as herself and not this idealized version she has in her mind. Being a hero isn’t as easy as she dreamed, and as we see Khan realize this it’s another way we can relate to her struggle. Who hasn’t achieved something they’ve dreamed of only to discover it’s not quite how they imagined it? 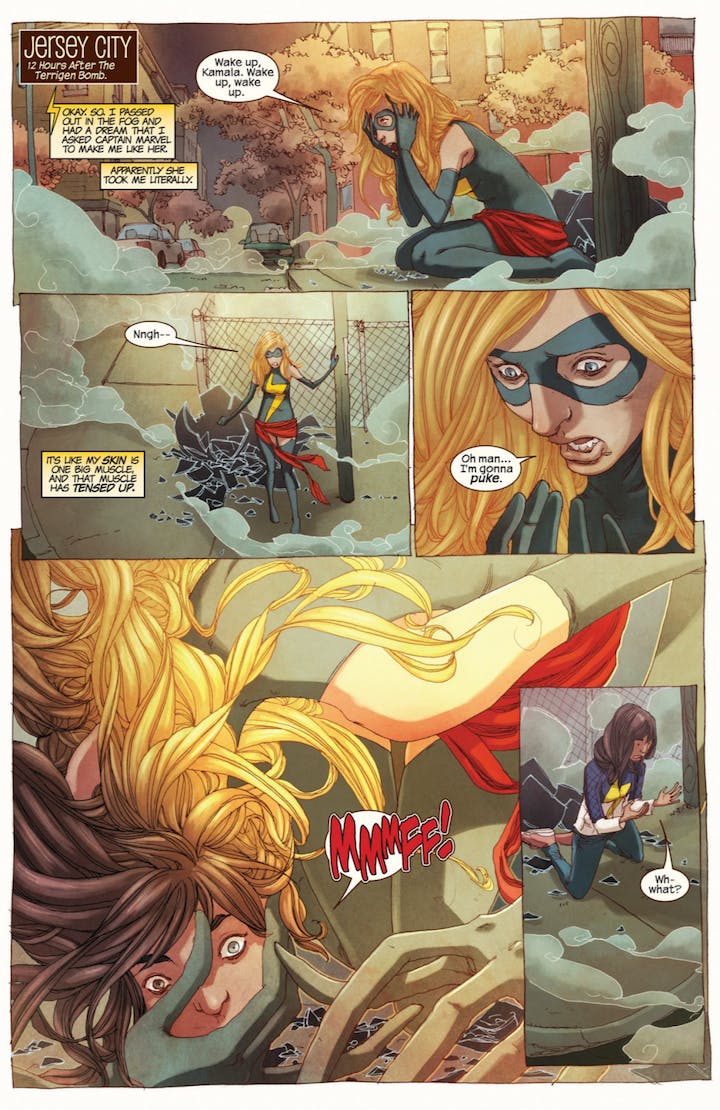 Another great aspect of Ms. Marvel is that it’s the perfect series for anyone looking to get started reading comics. You don’t really need any advance knowledge of the Marvel universe to get sucked into Khan’s world. The Avengers are mentioned, but when they get down to specifics it’s mostly explained for new readers. For example, you don’t need to know ahead of time who Carol Danvers is or was. It’s explained that she was the original Ms. Marvel and is now Captain Marvel. The only part that might be confusing is the process by which Khan gets her powers. They are the result of the Terrigen Mist that descends on Jersey City as a result of a Terrigen Bomb that was detonated in Earth’s atmosphere at the end of Marvel’s Infinity storyline. The origin of the mist though isn’t central to this series, so all you really need to know is that this strange mist gives people powers and thus our new Ms. Marvel was born.

Overall, Ms. Marvel has a lot of potential to become a great series and it’s worth picking up. As Kahn’s motivations continue to be revealed and she learns more about her abilities, the adventure will soon get more exciting. And until then, it’s easy to laugh and cringe with Khan as she grapples with her teen years and new hero identity.

It’s also worth noting that having another strong female hero in comics is also something to be celebrated, and it makes this is a great comic for young readers. Girls who geek out about heroes, write their own fan fiction, and have always wanted to see someone like themselves on the page will enjoy Khan’s story. They might also learn something as they meet someone who wants to escape the world because she doesn’t fit in and then discovers maybe that’s not the answer. Ms. Marvel is learning to accept who she is to become a hero in her own right, and that’s a message that all of us can feel good about reading.