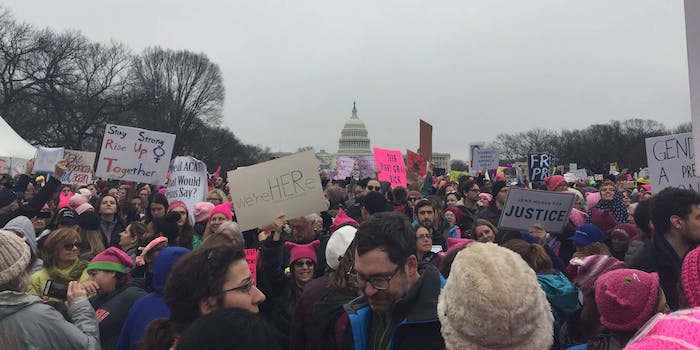 Strength in numbers: The Women’s March on Washington is only the beginning

It was day of warmth, empowerment, and hope—exactly what we need to move forward.

You could say the Women’s March on Washington was a polite affair. Whenever a wheelchair came through the sea of pink-knitted “pussyhats” that bottlenecked and faced every which direction, a chain of women would signal ahead to make way. Strollers and walkers were given the needed space to push through to find more stable ground.

In New York, where I live, it is common for people to squeeze and grunt an “excuse me” to get a half-step ahead. Not here. Women moved aside for one another, complimented each other’s clever orange-faced “Nacho Uterus” signs, and smiled at the notion of simply taking action together. There was not a single incident of violence or an arrest made at D.C.’s protest all Saturday.

Don’t be fooled, though. Just because we were mannered, reinvigorated to be standing next to other women, and optimistic by the power of our voices being validated, it didn’t mean we weren’t fired up. We were half a million people tired of demanding equality but ready to fight harder.

And that was only in D.C. There were 670-plus women’s marches worldwide yesterday, gathering more than 4.7 million people total, according to the official march website.

In Chicago, much like in D.C., the official march portion was also canceled when expected crowds of 20,000 reached upward of 125,000; in Boston, numbers swelled to 175,000; in Los Angeles, they topped out at 750,000. In New York, protesters were still marching well into the evening.

These were women, men, and children protesting not just women’s rights, but civil rights, LGBTQ rights, rights for the disabled, rights for sex workers, rights for anyone whose protections are in danger under Donald Trump’s administration. Those numbers aren’t a fluke or a bandwagon trend. They are representative of oppressed generations who’ve had to gather in the streets to stand up for each other and shout, “This is what democracy looks like.”

And on Saturday, it looked mostly like everyday American people.

Despite the definition of feminism being “men and women having equal rights,” the term still often induces eye rolls. For decades, feminists were seen as brash, high-strung, overly sensitive, or hippie-dippy. But the people from Saturday’s scene could have been pulled from a PTA meeting or a zumba class. Sure, there were pink hairs and a few topless women, but marchers were predominately moms, grandmas, husbands, college kids, and people who likely never protested before but felt they had to. That’s how dire they feel the stakes are in this country. 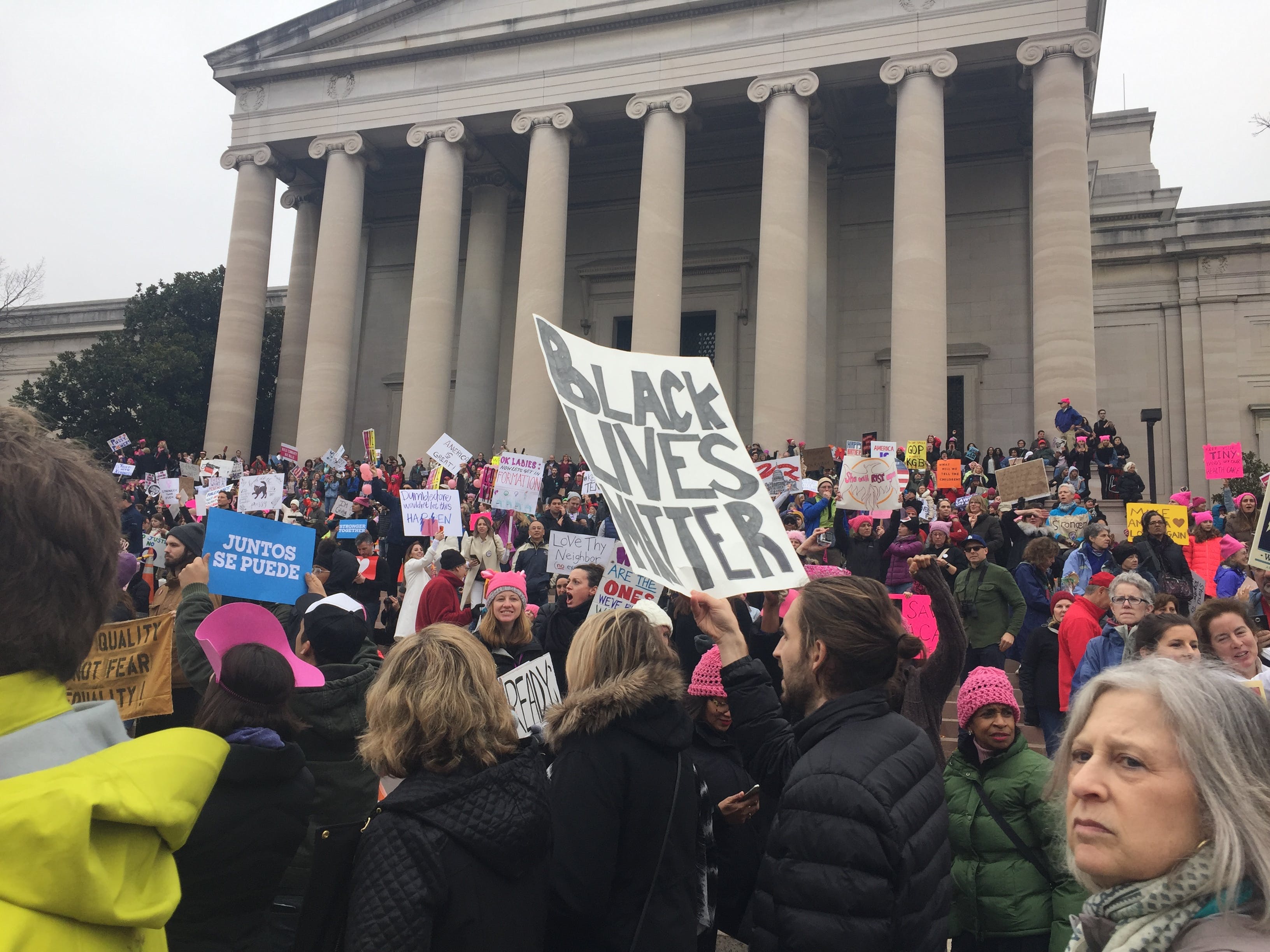 Was every citizen represented proportionately? No. At the D.C. march, the crowd was largely white. You could say that has to do with feminism’s longtime problem of embracing intersectionality and the issues that are more critical to some women of color, like having a living wage and immigration. Or it could be a reflection of the number of out-of-state visitors who could afford to fly and take the time off, or again, care to do those things just to join a movement that has traditionally overlooked them. This is a divide needs to be acknowledged and remedied if we want to move forward.

But what it lacked in racial diversity, Washington’s march had in ranges of age and sexuality. There were women well past their 60s with “WTF am I still doing protesting this shit” signs and queer women and men draped in rainbow flags. But the most inspirational in the crowd were the children.

I saw several teenagers, one standing high on the steps of the National Gallery, with signs that proudly read, “I am gay!” One kid came over and gave me a safety pin with rainbow beads and a charm that read, “Made with love.” And then there were the men. I’d say close to 20 percent of the D.C. marchers were men—in pink hats, in pink Carhartts, holding their female partner’s hand, raising their children on their shoulders, and chanting, “Her body, her choice.” 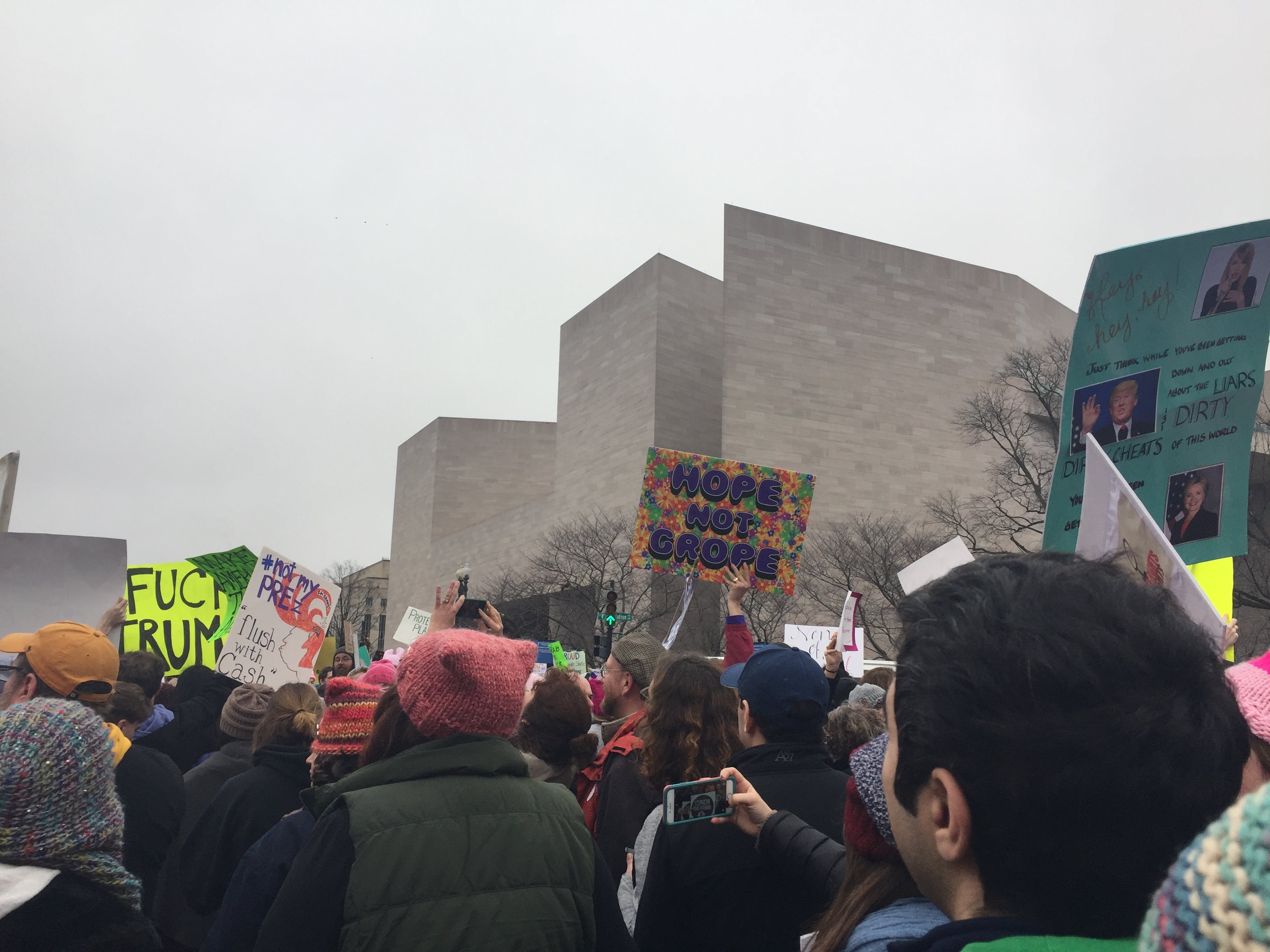 That is why I have hope that this march wasn’t just a one-off: This wasn’t and isn’t a women’s thing. It’s an everybody thing. And we have proven we have power in numbers.

Political scientists Erica Chenoweth and Maria J. Stephan, who have long researched the effectiveness of nonviolent protests, say there are three things successful resistance campaigns have in common: mass, diverse participation; the ability to produce regime defection; and the ability to use flexible tactics.

In a 2014 article for Foreign Affairs, they say the idea is for people to shift between “concentrated methods such as protests and dispersed methods such as boycotts and strikes.” This has been historically proven: Dr. Martin Luther King Jr.’s Birmingham Campaign was a combination of protest and boycott to put pressure on businesses to employ black people and end segregation—and it ultimately worked.

Boycotts in South Africa helped end the apartheid, and nonviolent demonstrations against voter fraud and violence led to the overthrow of corrupt Philippines President Ferdinand Marcos in the ’80s. Can we overthrow Trump? Highly unlikely. But we can put pressure on him and his Cabinet to ensure what protections we already have and then push for more. We have to show that his unwillingness to do so will be at an even greater cost to him.

Chenoweth and Stephan say that organization is the key to a working resistance. Many are skeptical that the American left can continue to show up and follow through on next steps, a skepticism that is warranted. We cannot pat ourselves on the back, hang up our pussyhats, and go back to simply complaining about Trump on Twitter. But that energy and the range of people who showed up on Saturday is not the disorder of Occupy Wall Street. Trump just took office, so our anger and our actions only have room to grow.

As Trump’s administration and a Republican-led Congress try to strip away the Affordable Care Act or discrimination protections for the LGBTQ community in the coming months, we will have to think back to how emboldened we felt Saturday. We have to remember we are not alone. We are the majority in individual votes and we are the majority that won’t just idly stand by. 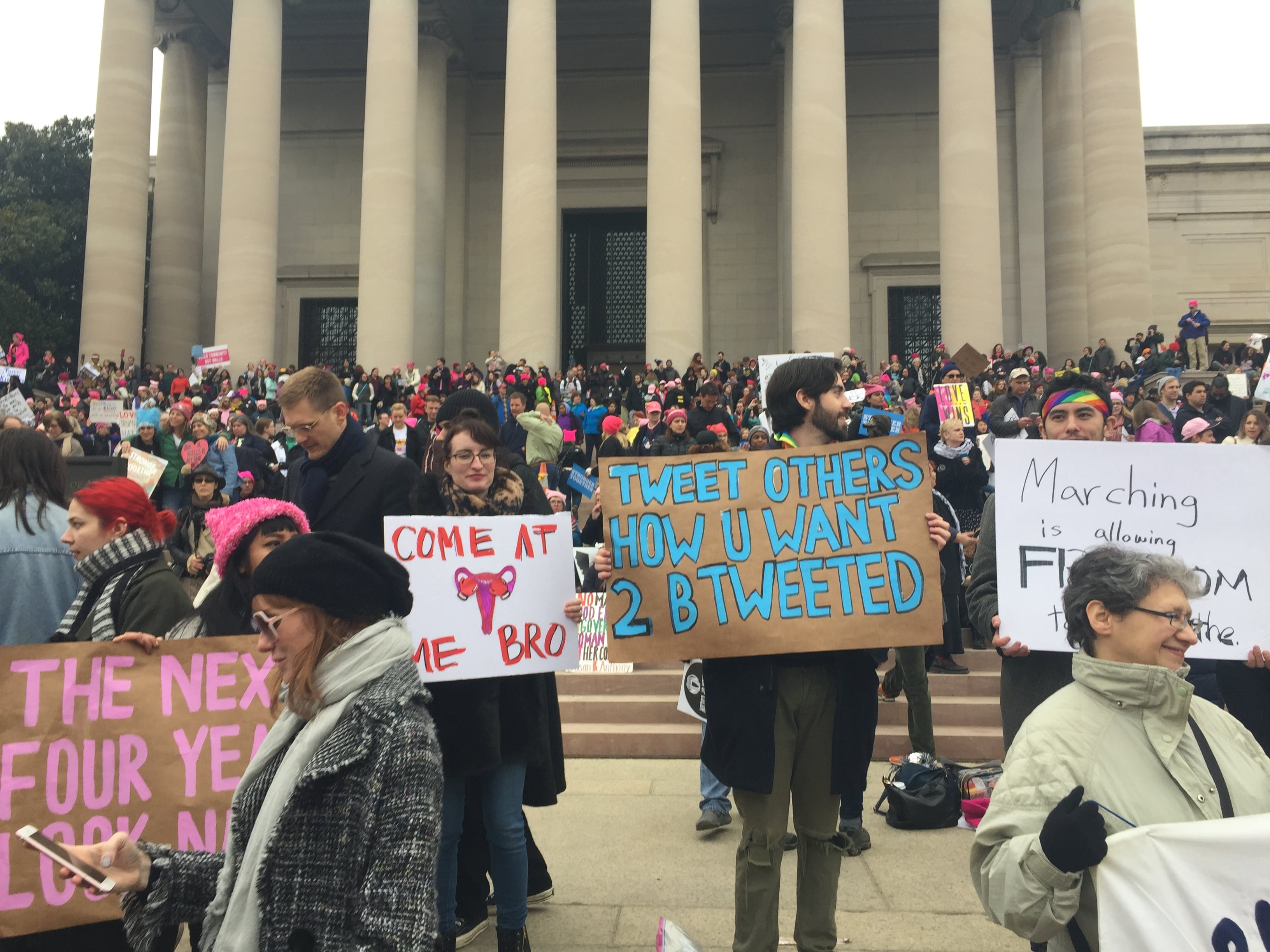 As my friend and I made our way out of D.C.’s designated protest pen yesterday, we knew we should probably get ourselves something to eat and drink, maybe use the bathroom, because it had been seven hours since we did any of those things. But we also didn’t want to leave that feeling of hope.

We walked about 100 feet down the hill from the Washington Monument, where hundreds had gathered around a nearly all-woman percussion band. We all danced to the Afro-Brazilian beat, our tired legs bouncing, our hoarse voices screaming, “Sí, se puede.” Yes, we can.

Then we carried our signs down the street into the dissipating crowd. Up ahead, we could hear a new wave of chants—“We want a leader, not a creepy tweeter”—and we joined right back in.