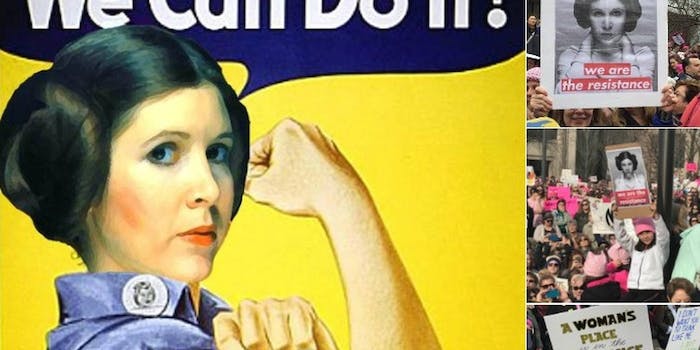 Princess Leia was all over the Women’s March, and Mark Hamill was moved

The Women’s March on Washington was an overwhelming success. Not only did it provide a stirring show of solidarity for the millions of people who participated, in the United States and around the world, it also positively dwarfed the estimated attendance of the Donald Trump presidential inauguration just one day prior.

There was also a very familiar face that kept popping up again and again. Carrie Fisher, who died last month, was shown on signs all over, leaning into her role as Star Wars rebellion leader Princess Leia.

Given the impassioned protest and the sense of resistance against the incoming administration, it’s no surprise that a pop culture emblem of resistance like Leia would be an appealing image. And one of her iconic co-stars is totally behind the politically charged tributes.

He wasn’t kidding, either. Multiple images of Leia were spotted during the protests, holding up the Princess-turned-General from “a long time ago, in a galaxy far, far away” as an emblem of political resistance in the here and now.

A powerful image from today's women's march on Washington. Carrie Fisher still inspiring a generation to RESIST and REBEL! There is #Hope. pic.twitter.com/IjLqNOfwKO

Fisher made no secret of her disdain for the then-presidential candidate last October, just one month prior to Election Day. Specifically, Fisher called Trump a “classless thug” in a tweet.

Hamill has not been shy about his dim view of Trump either. To the contrary, he’s frequently tweeted negative views of the president since his election victory in November.

In short, it’s a safe bet that Fisher would’ve been enthusiastic about all the tributes and statements being made in her image. As for the protests themselves, estimates suggest they drew out millions of demonstrators around the world.