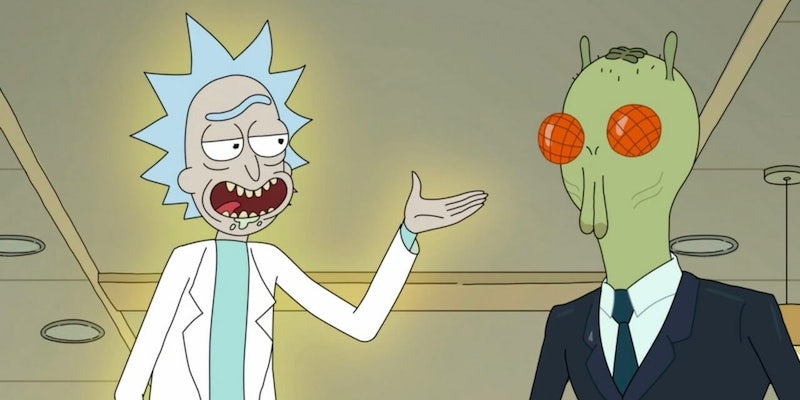 After waiting for more than a year for a new season or any news about when Rick and Morty will return, Adult Swim finally indulged fans with the greatest April Fools’ Day gift of all.

This is not a drill—and it’s not a joke: The season 3 premiere is on Adult Swim right now.

Rick and Morty’s Twitter made the surprise announcement at 8pm Saturday night just as the first airing of the new episode on Adult Swim’s website was about to start.

New Episode of RICK AND MORTY airing NOW thru MIDNIGHT (ET/PT) and ONLINE at https://t.co/BhAmA6Q4wH. pic.twitter.com/PwQX7WJQhW

It's repeating all night, ends at midnight! I think! https://t.co/zB0zh1N1Vp

Adult Swim’s livestream even included the message, “You can stop bugging us now,” to fans who’ve been nagging the network and co-creators Dan Harmon and Justin Roiland (Rick Sanchez and Morty Smith) nonstop about it. Harmon even revealed their master plan the night before after a fan complained about the lack of information on season 3.

The premiere episode, which will air on a loop until midnight (ET/PT) and in certain locations—sorry guys—finally delivers. Nathan Fillion guest stars as Rick finally reveals why he let himself become imprisoned—and how he escapes.

THIS EPISODE IS WORTH THE GOD DAMN WAIT! AM I RIGHT, LADIES AND GENTLEMEN?!

Stick around after the credits for one more scene! And then watch the episode again right after, because there's no way you saw the opening!

It sure was. Now where’s the rest of season 3?

You can watch the season premiere on Adult Swim’s website.