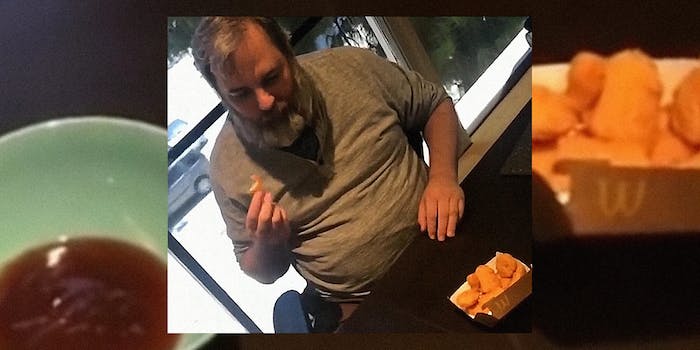 Screengrab via Not Justin Roiland/YouTube Remix by Jason Reed

They did in months what Rick pledged to do in nine seasons if he had to.

Rick and Morty’s never-ending quest for McDonald’s Szechuan sauce in the season 3 premiere became the unlikely beacon that united an entire fandom, and after several months, McDonald’s finally delivered. Now, weeks after receiving it, the show’s creators and crew have finally had a chance to try it for themselves.

Dan Harmon, Justin Roiland, and their team gathered together to try the Szechuan sauce from Dimension C-1998, which also apparently included playing the Mulan soundtrack. (The limited edition Szechuan sauce was originally tied to Mulan’s theatrical release.) It’s the kind of sauce someone would pay $15,000 to get their hands on, but here it’s just sauce and nuggets.

"It's delicious and every scoop is twenty bucks." pic.twitter.com/rdw3MmIxRf

A day later, their recorded reactions arrived. Does it measure up to the wave of nostalgia and practically unrealistic expectations Rick and the Rick and Morty crew held it to?

Surprisingly, not everyone found it as amazing as Rick Sanchez did. But the highest praise came from the person vocalizing it the loudest: Roiland, who voices Rick on the show.

“It’s really good, I swear to god,” Roiland said. “Bring it back please so we can all die of diabetes.”

If nothing else, Harmon, Roiland, and their crew were able to do in months what Rick might not get to do in nine seasons—with a little help from corporate intervention.