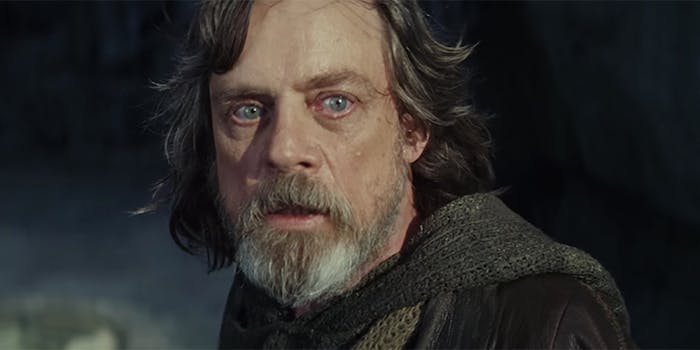 ‘It just wasn’t a Luke I understood.'

When it came to playing Luke Skywalker in Rian Johnson’s Star Wars: The Last Jedi, Mark Hamill famously disagreed with the direction of the beloved character. It’s a fact Hamill has been open about while maintaining that his comments weren’t a negative review of the film itself.

But there were still plenty of Star Wars fans critical of Johnson’s choices, which gave the franchise’s original hopeful hero a dark edge. The topic is explored in depth in a new two-hour documentary called The Director and the Jedi that premiered at South by Southwest on Monday. Both Hamill and Johnson joined documentary filmmakers Anthony Wonke and Ram Bergman for the event.

While the documentary offers plenty of behind-the-scenes insight, a Q&A following the premiere gave Hamill, in particular, the opportunity to dive into his thoughts and methods ahead of production for The Last Jedi.

“When you get down to it, it’s not Mark Hamill in a blockbuster film,” Hamill explained of his preparation for the role. “It’s Luke. I had to do a wild reimagining of the character. Like, hey, what happened between the last one and this one, where the most hopeful man in the galaxy becomes a cranky, old, suicidal man telling people to get off his lawn?”

When one fan pressed further on the disagreements between Hamill and Johnson, Hamill said it wasn’t a matter of “distaste.”

“It just wasn’t a Luke I understood,” he said, explaining that he came up with his own “backstories” for the character to reconcile his idea of Luke with Johnson’s plot.

Johnson jumped in to remind fans that push-and-pull between actors and directors is not at all uncommon—and in fact adds to the creative process.

“In the context of how this has all been framed, you have to snap your head back and remember that with every single movie, with characters, it’s always a dialogue between the director and actors,” Johnson said. “That’s a healthy thing. You always butt heads with actors.”

An anecdote from Hamill about working—and at one point disagreeing—with George Lucas during production for Return of the Jedi reiterated this point.

“I read [the script for] Jedi and thought, ‘Wait a sec! I thought I was heading toward the struggle of heading to the Dark Side. I’m in black. I have a glove. I see a trend here,'” Hamill said.

The actor also doubled down on his apology for causing division with his original comments about his creative clash with Johnson, explaining that the perceived negativity came from his own love for the franchise.

“I’m like a lot of you,” Hamill said. “I feel an investment in it—a certain sense of ownership, which is a joke, because I don’t own it, now Disney does. But you care. That’s what happens with these films. I’m sorry I lowered my guard and expressed my misgivings about it. That belongs in the [filmmaking] process. That doesn’t belong to the public. I feel bad because I made that statement before I saw the finished film.”

The Director and the Jedi will be available on The Last Jedi Blu-ray, hitting stores March 27. You can watch the first 12 minutes of the documentary over at IMDb.