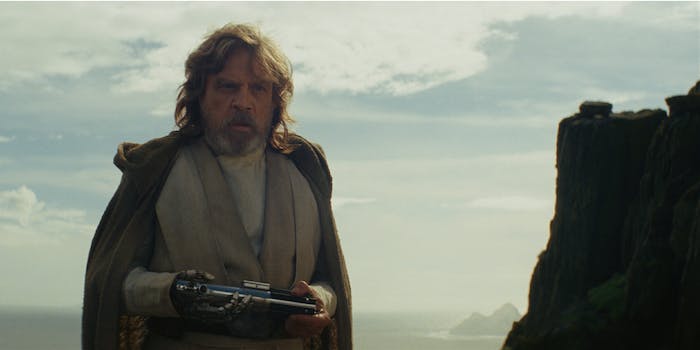 Mark Hamill created his own gut-wrenching backstory for Luke Skywalker

It's especially dark and tragic.

For years, Luke Skywalker’s life between the end of Return of the Jedi to the end of The Force Awakens has been one giant enigma. We’re likely to find out bits and pieces in Star Wars: The Last Jedi, but Mark Hamill had some fascinating ideas of what might have happened to Luke before he started filming.

Speaking to Entertainment Weekly, Hamill spoke about creating his own backdrop for Luke during the 30 years between movies that he could tap into whenever he was filming. Going from the young Jedi knight who tried to save his father and helped bring down the Empire to a broken man whose nephew betrayed him is a drastic change, and even before Hamill learned the canonical details, he started to put together some ideas, if only for himself.

“Actors like backstories. They want to know motivation and all those things, and it’s such a blank slate,” Hamill explained. “You know, if you look at it intellectually, I realized that it’s not my story anymore and so what [Luke] did or did not do in the intervening years aren’t really important to the audience at this point, but I have to work it out for myself.”

Hamill’s observations are spoiler-free, if you’re looking to avoid plot points, but they offer an insightful window into Hamill’s (and in a sense, Luke’s) mind and the depth of the guilt and anguish he’s going through in the movie. Think of it more as actor-fueled backstory than actual Star Wars canon.

In Hamill’s mind, he met and fell in love with a young widow with a young child and temporarily stepped away from the Jedi order because the Jedi aren’t supposed to form attachments. But before Kylo Ren would destroy Luke’s Jedi temple, the last Jedi faced another tragedy: the young child “got hold of a lightsaber and accidentally killed himself.” Hamill compared the kind of guilt Luke is facing in The Last Jedi to stories of children who accidentally shoot themselves or their siblings after they’re able to obtain a parent’s guns.

During filming, Hamill bounced off his idea with director Rian Johnson to make sure they were on the same page with Luke’s character

“[Johnson] was really nurturing in that regard, encouraging me to find ways to justify the actions in this movie,” he said. “But like I say, that little story I told about Luke leaving the Jedi and getting married, that’s not officially what happens.”