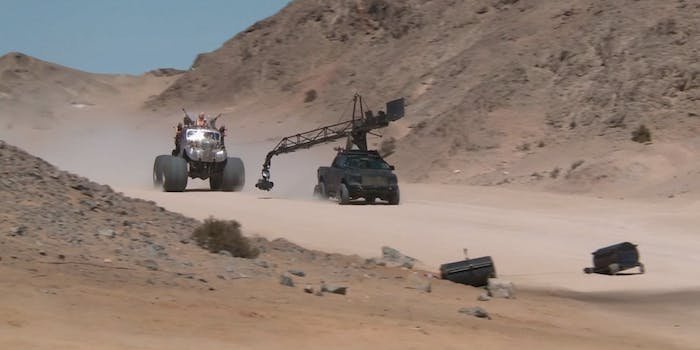 Behind-the-scenes video shows ‘Mad Max: Fury Road’ was intense even before the CGI

You'd probably still watch it if it looked like this. It's that badass.

Mad Max: Fury Road is one of the best action films in years. But unlike most other action films, it still looks totally badass when you strip away the special effects and computer-generated imagery (CGI).

Thanks to Sploid, you can see a frame-by-frame comparison of the filming of the blockbuster hit before and after the special effects were added. Bodies are flying, cars are exploding, and dirtbikes execute some crazy tricks.

Fury Road is the rare action movie that would still be an entertaining watch even without CGI. As Hugh Keays-Byrne, the actor who plays the terrifying Immortan Joe, says in the short video, “You look amazing! You look amazing!”

For a complete breakdown of how the filmmakers rigged vehicles, executed insane stunts, and made their way through Namibia and the deserts of Australia, check out this article in FX magazine on Mad Max: Fury Road’s impressive visual effects.