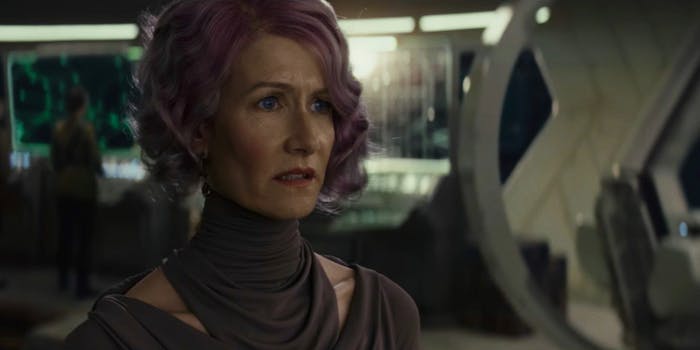 The Last Jedi garnered a wealth of criticism for a number of reasons from viewers over the past month, ranging from how the movie treated Luke Skywalker and the Canto Bight subplot to its disrespect of nostalgia and the disinterest in Snoke’s origins. But a small subset of viewers’ dislike of the movie may have been because of the characters: They didn’t like Rose Tico and Amilyn Holdo for racist and sexist reasons or perhaps they thought that Rey’s growth and training to become the last Jedi by the end of the movie was too unrealistic.

For those fans, someone has taken The Last Jedi and edited it down into a much shorter movie, which is dubbed “The Last Jedi: De-Feminized Fanedit (aka The Chauvinist Cut).” It cut out female characters when it could and tremendously trimmed down character development and scenes that could show female characters positively. By accounts on Reddit and the Pirate Bay page that reportedly has the fanedit, it’s 46 minutes long and even the anonymous creator admits that the movie is practically unwatchable.

The biggest departure? Vice Admiral Holdo, introduced as the leader of the Resistance after Leia Organa is incapacitated from being thrown into the vacuum of space and butts heads with Poe Dameron, simply doesn’t exist. Her pivotal clashes with Poe are deleted, and she isn’t the one to sacrifice herself by flying straight through the First Order’s ship so that the last of the Resistance can safely reach Crait. Poe is.

Canto Bight also gets chopped, along with most of Rose’s characterization, who reportedly doesn’t do more than say Finn’s name. Leia dies early on, as does Phasma in her fight against Finn. The Elite Praetorian Guard fight is finagled with so that Kylo Ren takes on most of the guard alone (and Kylo Ren is apparently “more badass and much less conflicted and volatile”) while Paige Tico’s powerful moments on-screen are completely cut. The opening sequence doesn’t include the conflict between Leia and Poe. And just to be safe, the movie cuts out as many shots of women in the background as possible.

The result is a movie that is filled with plot holes. It’s uneven, the movie moves far too quickly, and it is devoid of any of the nuance and layers of setup that made The Last Jedi something people are still discussing a month after its release.

What the “de-feminized” version of The Last Jedi also does is demonstrate just how integral to Star Wars its female characters have become. No longer are supporting female characters relegated to a handful of scenes sprinkled throughout three movies. There are many of them, and they’re vastly different from each other. They’re heroes and villains; Jedi, mechanics, bombers, leaders, and soldiers; they’re the oblivious rich, communication specialists, and even a little girl who listens to the legend of Luke Skywalker. The Last Jedi’s female characters build on what The Force Awakens and Rogue One have constructed. A woman delivered the Death Star plans to the Rebellion, a woman is leading the Resistance, and a woman might end up taking down the First Order and its new Supreme Leader in Episode IX.

And if nothing else, it’s provided many fans—along with director Rian Johnson and actor Mark Hamill—with a good laugh.