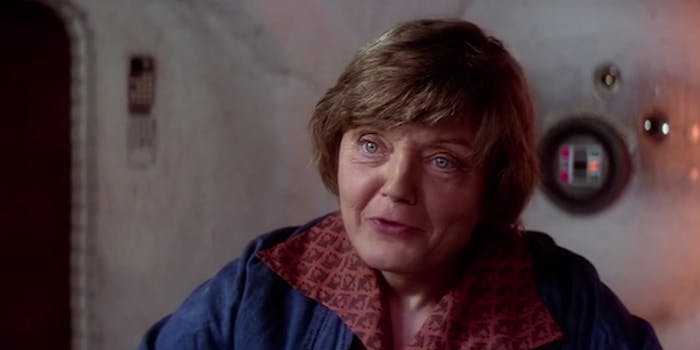 How often do women who aren’t Leia speak in ‘Star Wars’? Blink and you’ll miss it

Star Wars fans have long noticed that outside of Princess Leia in the original trilogy and Padme Amidala in the prequel films, the presence of female characters in the films is pretty lacking. But how much of an impact do they make in the time that they’re given?

Aunt Beru, who raised Luke since he was a baby, backed up Luke when her husband, Owen Lars, wanted him to stay at home to tend the farm. Then she was killed by stormtroopers. Mon Mothma, who has the longest piece of dialogue by far, coordinates the plans for the Rebellion to destroy the second Death Star. And while we learn nothing about the ion cannon controller, she knows how to do her job.

This depressingly short supercut didn’t include any of Leia’s dialogue over the course three films, which would’ve made the video considerably longer, but that was an intentional. Leia is the one of the main characters in Star Wars and central to the plot of the films, and fans have loved her ever since she first graced our screens almost 40 years ago. But the other characters—that’s one per film, mind you—barely stand on their own, and it demonstrates that just having one developed female character isn’t good enough. Even Lucasfilm president Kathleen Kennedy said this needs to change.

There are considerably more women in The Force Awakens (after some backlash) than in Star Wars movies in the past, and J.J. Abrams has expressed that he hopes this is a film that “mothers can take their daughters to as well”—even though that’s always been the case. Let’s hope that stands for the background characters too.