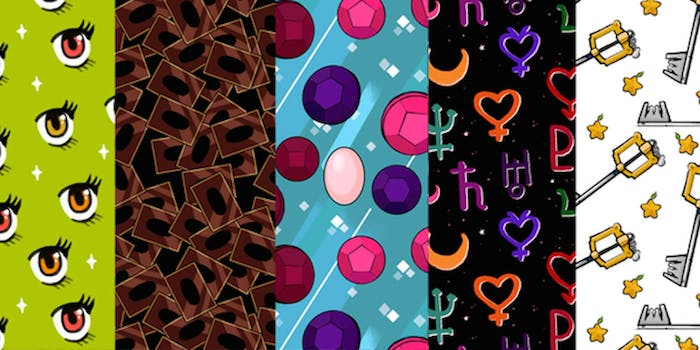 The crowdfunding campaign has already surpassed its initial goal.

Twenty-two year old illustrator Paige Hall has been going to conventions ever since she was little.

The art school graduate attends these days to sell her work as a vendor, but in her years of attending conventions she’s noticed a bothersome trend. In her search for geek fashion, she often discovers items not available in her size because they are not being sold above a size XL. Now Hall is stepping up to try and change the sizing problem with a Kickstarter campaign.

“I guess one day I realized that I was totally in a position to be able to produce clothing for all of the people I know (who) have been in the same position as me,” Hall told the Daily Dot in an email. “I started doodling people wearing things that I thought would be cute and thought, ‘Yeah, I can do this!’”

The result is a crowdfunding campaign for ANI+, which will only create nerdy clothing in plus sizes ranging from XL to 3XL inspired by anime, video games, and cartoons.

“Kickstarter was the first and only thing that ever came into my mind for this project! Clothing is expensive to produce, and I think most of all, I wanted to use it as a gauge to see if there was actual interest in what I was trying to do. Needless to say, I am very pleased with the result! I can’t believe how fast we reached our goal,” she said. 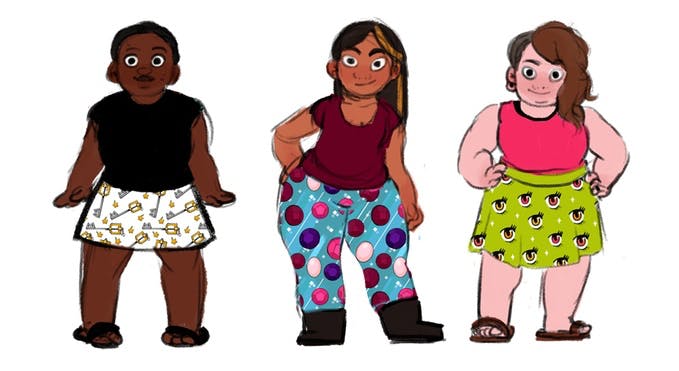 The campaign has surpassed its original goal of $2,500 to raise more than $3,400 as of Tuesday. As a result, one stretch goal has already been reached and added a potions and rupees pattern to the five other nerdy designs ANI+ will be offering on skirts and leggings. If the campaign reaches $3,500, a second stretch goal will unlock a Dragonball polkadots pattern. The patterns are cute, unique, and surprisingly a new area for Hall, though you’d never know it looking at them.

“Patternmaking is a really interesting and precise kind of art that I’d never delved into before. I’d been playing with the idea in my head for a while, specifically the Crystal Gems from Steven Universe, so that’s where I started! Plus, I thought it was fitting considering that the character designs alone in [Steven Universe] are a huge proponent for body positivity. I’ve even cosplayed two of the characters!” she explained. “After that, I just sat down and thought about shows and games that a lot of people have a soft spot for, usually for nostalgia’s sake. I liked the idea of taking something from childhood and ‘growing it up’ to be a cute fashion statement.”

The Kickstarter description states that the money will first go to fulfilling the orders made by the campaign’s backers before being used to help Hall create designs to bring to conventions. Now that the campaign has been successful though, Hall said it’s “been great encouragement” for her. The conventions where you’ll be able to find Hall over the next year so far are Youmacon, Nekocon, and Shuto Con. She plans to attend others, which she’ll announce in the coming months.

“I just really want to hit home that plus-sized people (women, men, and [everybody] else) are absolutely a part of fandom culture and they deserve to wear cute things while repping their favorite stuff! I can’t properly explain how amazingly refreshing it is to find something really cool and it’s actually in your size,” Hall said. “Plus, my favorite thing about wearing clothing that has a theme, whether it be anime, cartoons, or video games, is that it’s always likely to drum up a conversation with someone. If one of my customers could make a new pal or two because they couldn’t help but tell them how cute their skirt is or how cool their leggings are, I would be ecstatic. Plus, they’ll look fab while doing it.”

You can learn more about ANI+ and its campaign on Kickstarter.