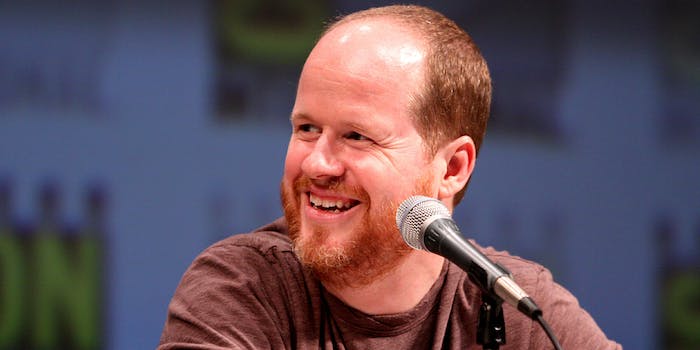 Joss Whedon in talks to direct a Batgirl movie

He already has two Marvel movies under his belt.

Joss Whedon is close to reaching a deal to direct a standalone Batgirl movie, Variety is reporting.

He would also write and produce the film. The Batgirl movie appears to be in early stages as little has been said about the film, although Jon Berg and Geoff Johns are involved and it would “feature other characters from the world of Gotham.”

Although Whedon had spoken about how exhausted he was after making Avengers: Age of Ultron, he voiced interest in directing another superhero movie such as a “female-driven Avengers franchise.”

Information on Whedon’s Batgirl film is scarce—and Warner Bros. has yet to confirm the news—but reaction is mixed from fans, some who have been following Whedon’s work for more than 20 years. Some are excited while others wished that Warner Bros. had gotten a female director instead.

Unlike many of the other directors slated for superhero films, Whedon already has experience under his belt through Marvel, but even that’s a mixed bag. We’ve seen him at Marvel’s best (Avengers) but also at OK-to-mediocre (Age of Ultron). And while Whedon’s female characters have long been praised and admired by fans, he’s also been known to screw it up. (Black Widow’s entire Age of Ultron arc.)

Batgirl, if she eventually does come to the screen, would expand DC’s lineup of female super films, which includes Wonder Woman arriving in June and a planned Sirens of Gotham film featuring Harley Quinn.

No matter how you feel about Whedon taking up Batgirl’s mantle, there is a silver lining: At least it’s not Zack Snyder again.