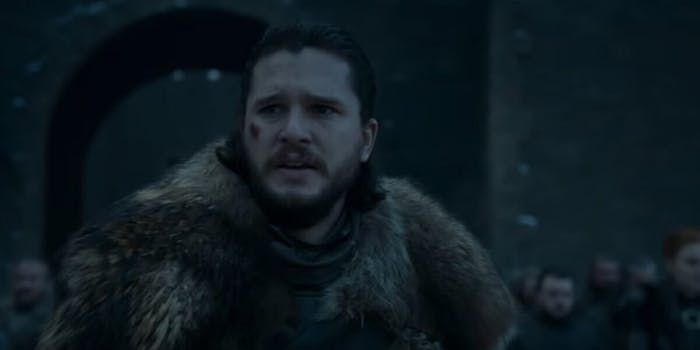 'I'm sorry we wasted your time.'

Jon Snow (Kit Harington) is apologizing to fans for the highly criticized final season of Game of Thrones in a new deepfake video.

Produced by YouTube channel “Eating Things With Famous People,” the clip shows the Bastard of Winterfell condemning the show’s last six episodes, alongside other notable figures from the Seven Kingdoms.

“It’s time for some apologies,” the deepfake Snow begins. “I’m sorry we wasted your time. I’m sorry we didn’t learn anything from the ending of Lost.”

Taken from Snow’s eulogy speech during episode 4, “The Last of the Starks,” the deepfake version pokes fun at some of the HBO series’ most controversial moments, like the Starbuck’s cup fiasco.

“When the Starbucks cup is the smallest mistake, you know you fucked up!” Snow adds. “We take the blame. I’m sorry we wrote this in like six days or something.”

The footage ends with everyone from Arya Stark to Daenerys Targaryen setting fire to the season 8 script.

“Now… let us burn the script of season 8 and just forget it forever!” Snow says in closing. “Fuck season 8!”

The final season of Game of Thrones was met with distaste from fans and critics alike. The now-infamous petition to have the whole season remade was created by a fan. On Rotten Tomatoes, the final season pales in comparison to its former seasons with a measly 53%.

Chris Ume, the creator behind the deepfake video, told the Daily Dot that his team hired a voice actor to impersonate Snow and spent weeks perfecting the video.

Ume said he not only used his own special effects skills to create the video but also relied on the help of well-known deepfake creator the Fakening.

An artificial intelligence program was used to analyze video of both an individual lip-syncing the voice actor’s audio clip, as well as Snow’s face. The mouth was then digitally placed over Snow’s to bring the deepfake to life.

While an obvious satire, the Game of Thrones clip dropped on the same day U.S. lawmakers warned that deepfakes pose a threat to national security over their potential to disrupt the 2020 election.

It appears, however, that much simpler techniques can be effective for causing political disruption. A video of House Speaker Nancy Pelosi (D-Calif.) recently stirred controversy after it was discovered that it had been slowed down and altered to make the politician appear intoxicated.