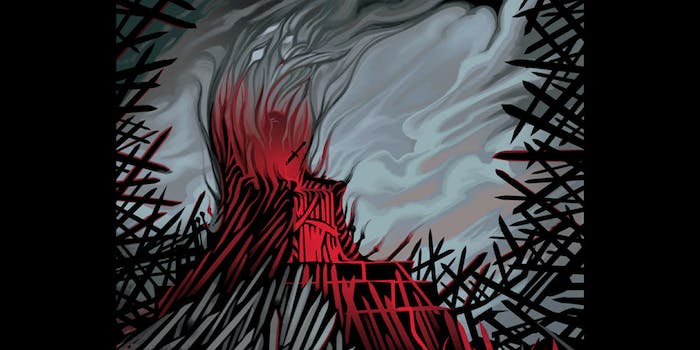 This illustration perfectly sums up the end of ‘Game of Thrones’

It's a culmination of everything that led to that moment.

During Game of Thrones’ run, the Beautiful Death series released detailed illustrations that would pay tribute to an episode’s biggest (or most consequential) death. It was almost as much of a highlight as the show itself, and now, nearly a month after Game of Thrones ended, the final entry in the series has arrived online. It was well worth the wait.

“And now my watch has ended,” Robert Ball, the artist who’s been working on the art series for several years, wrote on Twitter.

You are my Queen, now and always.

Like many of Ball’s pieces, there are several layers to the Beautiful Death for “The Iron Throne,” which features a trail of blood leading up to the Iron Throne. Ball described the illustration as “a visual journey of Daenerys’ progression through all 8 seasons,” one that led all the way to the Iron Throne she sought to sit in and rule—but never would.

As your eyes follow the trail from the bottom right corner, you’ll be able to spot a plethora of Easter eggs. From Daenerys Targaryen’s eggs to Sons of the Harpy masks and Kingsguard helmets, broken chains, a crown for her brother Viserys, Jaime Lannister’s golden hand, and Cersei’s necklace, there’s plenty to discover. But the road ends, leaving the shape of the Three-Eyed Raven (as a nod to Bran Stark) to emerge from the ashes to indicate the future of Westeros.

The final Beautiful Death illustration is a particularly notable addition to the collection—and not just because it’s the final one. Even though many characters have sat in or strived to obtain the Iron Throne, it’s the first (and only) Beautiful Death to actually feature it.

“I always felt the last episode would dwell on the Iron Throne, as it’s been the motor driving the plot forward for seven seasons, and I was hoping I would get to draw it,” Ball told the Mendola Artists blog. “I avoided representing it in any of the previous images, and luckily my instinct paid off.”

In a 2017 interview with Insider, Ball described the process of creating the Beautiful Death illustrations as something that took place over the course of a few days. He watched the episode on Mondays, sent over a sketch to HBO that day or the following, and then spent the next couple of days adding in details and coloring before finalizing on Friday.

For the final Beautiful Death, HBO gave fans an up-close look into Ball’s creative process as he storyboarded and planned what he would do. He found a particular poignancy in illustrating the Iron Throne at the very end.

“If you’re creating content around a show, why not make it as creative as possible?” he said. “It’s what the fan deserves and what the show deserves. Plus, who said death couldn’t be beautiful?”