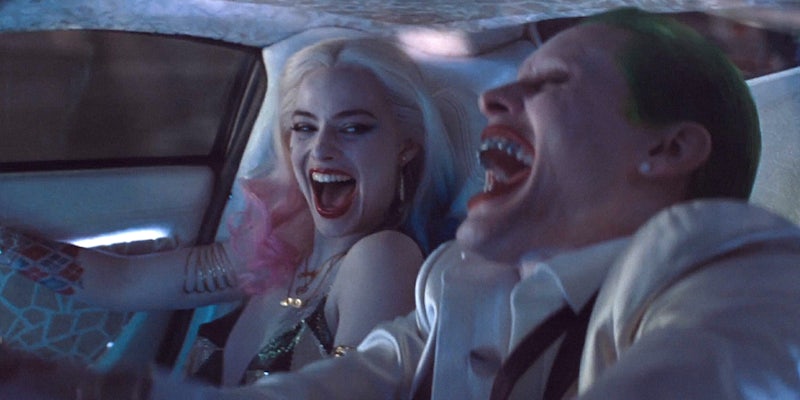 It will be written and directed by the men behind 'Crazy, Stupid, Love.'

Closely following yesterday’s news about a gritty 1980s Joker reboot, The Hollywood Reporter confirms there will be a Joker/Harley Quinn movie as well.

While the 1980s Joker reboot will reportedly cast a new actor, the Joker-and-Harley movie will see Jared Leto and Margot Robbie reprise their roles. A Harley Quinn-led Gotham City Sirens movie was already in the works with director David Ayer, meaning these characters will either be very busy, or Warner Bros. is planning to cancel something.

Writer/director partnership Glenn Ficarra and John Requa (This Is Us; Crazy, Stupid, Love) are in final negotiations to helm the Joker and Harley movie. It’s described as a “criminal love story,” an idea that will provoke mixed feelings among fans. Both characters are incredibly popular, but there are a couple of obvious concerns about this project. First of all, the premise sets alarm bells ringing about romanticizing the abusive relationship between Harley and the Joker. Secondly, it would’ve been nice to see a woman behind the camera for one of Harley Quinn’s screen appearances. With Joss Whedon writing and directing the Batgirl movie, Warner Bros. seems uninterested in following Wonder Woman with more movies by women filmmakers.

THR’s report goes on to suggest a new direction for the DC franchise as a whole. While the Joker and Harley movie will remain within the main DC franchise alongside Justice League and Suicide Squad, Martin Scorsese’s Joker reboot is part of a new strand, in a similar vein to the Star Wars spinoffs.

Apparently, it’s “unclear” whether Matt Reeves‘ solo Batman movie will be part of the main franchise or not, leaving the door open for Ben Affleck to depart and be replaced by another actor after Justice League. Further complicating matters, Reeves recently said that The Batman is “a standalone, [that] isn’t part of the extended universe.” Is the DC franchise in the midst of a major shake-up?