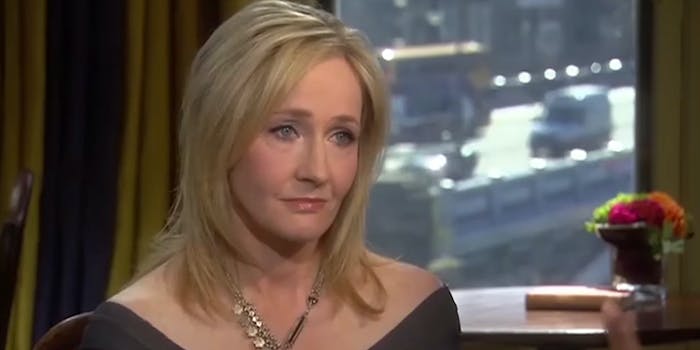 She brings good tidings this holiday.

J.K. Rowling reflected on releasing Harry Potter and the Cursed Child and Fantastic Beasts in the past year after relaunching her website Wednesday. But she also revealed that she’s still got more on her plate.

Along with posting a Harry Potter-filled FAQ for fans, she gave an update on the writing progress on the Cormoran Strike series, which she publishes under a pseudonym.

“Robert Galbraith, my crime writing alter-ego, remains active, and is currently working on his fourth,” she wrote. “There’s no publication date as yet, given how busy 2016 has been, but I’m making steady progress.”

After the post went live, fans had more questions for her. Some were regarding Harry Potter’s world, but others were curious about when they would get a new novel. And Rowling had some good news: She’s currently working on a novel (although she says that is always the case).

I'm working on it (literally). And thank you! https://t.co/vA6CZcVhRW

Rowling didn’t mention what exactly she was working on right away, but it didn’t take long for some fans to jump to the conclusion that she was working on another book set in Harry’s world. (She isn’t, although she has written two of the screenplays in the Fantastic Beasts franchise to date.)

No, no, no. There won't be Newt Scamander novels. Only movies. Calm down, there! https://t.co/Zyhim6Wscd

Although she covered what she was doing under Galbraith’s name in her post, she clarified that she has two novels in the works—one by Galbraith, one by her.

One of each, but I'm not sure which will come out first. I'll let you know as soon as I do! https://t.co/gFF8UZmq5W

Rowling doesn’t have a release date or timetable for either novel, but knowing that there are two new Rowling books in the works might just hold us over till the new year.