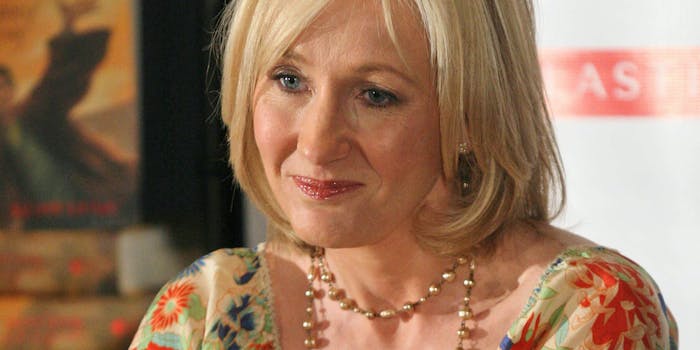 Can you find it?

During the height of Harry Potter fandom, J.K. Rowling would offer her readers puzzles and nuggets, writing updates and answering some of their looming questions through her official website. Now she’s relaunching it to get back to her roots.

JKRowling.com hasn’t gotten much use since the Harry Potter series was published. The majority of new Potter information is revealed through Pottermore, the popular hub for fans of the franchise. Rowling brought her site a few years ago for news and update, but it  didn’t have the same personal feel it once had.

She announced the relaunch on Twitter. Although it was initially plagued with loading issues, it’s working now.

See https://t.co/ZvvZVAHHN9 for answers to some FAQs on Fantastic Beasts, including this one! https://t.co/dpv4CW9NOw

The site depicts snippets of her writing and illustrations, while crumpled paper gives it a personal touch and reflects what her writing desk actually looks like (minus stale popcorn and biscuit crumbs). Rowling kicked off the launch by reflecting on the past year, which has been an active one for her and Harry Potter fandom.

“I didn’t plan for the stage play Harry Potter and the Cursed Child and the movie Fantastic Beasts and Where To Find Them to come out in the same year, but that’s what ended up happening, with the result that 2016 meant an almost total re-immersion in the wizarding world,” she wrote. “I’ve been absolutely delighted with the reception of both pieces: the stakes are always very high when you return to a well-loved creation, and after almost a decade of refusing to do spin-offs or remakes, I feel overwhelming relief that both long-time fans and newcomers have enjoyed what we’ve done.”

As was the case with older versions of Rowling’s site, she’s got a couple of tricks hidden up her sleeves. She hints that she brought back the “debunking function” to her site, which you’ll find by going to the main page and clicking on the crumpled up piece of paper. There isn’t anything for her to debunk right now, but she’ll likely update that soon enough.

And to bring back another function of her site, she used the launch to answer frequently asked questions about Fantastic Beasts. Now that it’s been out for a month and immediate fears of spoilers have passed, she’s been responding to more inquiries and has posted some tidbits to Twitter in the past week.

He is a Seer AND he was lying. https://t.co/qUAXwHtpJt

On the site, she tackles more of the logistical questions, such as why Newt Scamander wasn’t able to Apparate to America (it’s risky and dangerous) and why he went through No-Maj customs (“No-Majs were far easier to fool than the wizarding checkpoint would have been.”) as well the kind of things we might have missed. For instance, Grindelwald used Transfiguration to make himself look like Percival Graves, not a Polyjuice Potion, so that’s why Newt’s “revelio” spell worked. And we learn a bit more about an Obscurus: It happens when magic is associated with a trauma, so while that rules out Harry—whose abuse by the Dursleys didn’t involve magic—it makes the case Ariana Dumbledore is an Obscurus that much stronger.

And although it probably won’t stop the fan questions from coming in, Rowling debunks the long-deduced theory that Harry accidentally created a Horcrux in Chamber of Secrets.

A new site and a FAQ? Now that’s a great Christmas present.