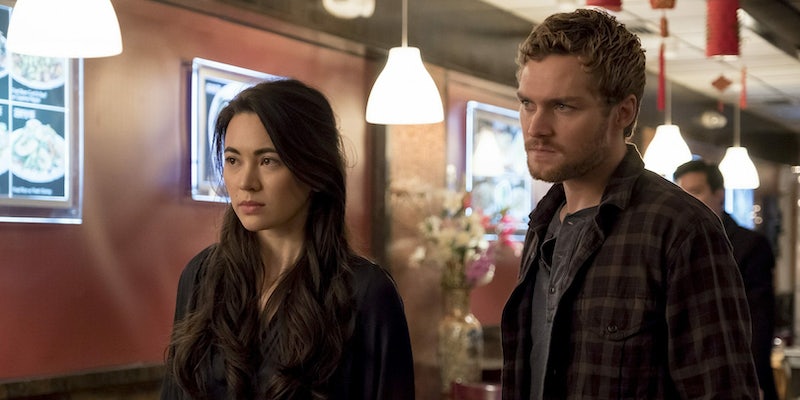 Review: ‘Iron Fist’ improves in season 2, but it still sucks

Congratulations to Iron Fist, which just leveled up from unwatchably bad to merely boring. Thanks to new showrunner Raven Metzner (Sleepy Hollow), Marvel’s worst Netflix show now features competent writing, decent action scenes, and a hint of actual personality. It may not measure up to the panache of Luke Cage or Jessica Jones, but at least watching it no longer feels like a stint in purgatory.

The main cast returns for season 2, plus Alice Eve as the Daredevil comics villain Typhoid Mary, and a supporting cast of Chinese triad gangsters. (No Marvel/Netflix series is complete without organized crime.) Danny Rand and his girlfriend Colleen Wing are now living together, with Danny continuing his “rich guy on a gap year” theme by working at a furniture removal company. Yes, billionaire Danny Rand is moonlighting in a blue-collar job to “learn the value of work” or whatever.

This is characteristically douchey for our old pal the Immortal Iron Fist, but downright bizarre when coupled with Colleen’s new job at a local community center. While Danny plays at being poor, his girlfriend handles problems that could easily be solved with money. When we see Colleen worrying about a client who needs $700 for immigration fees, it’s just like, “Why not ask your boy for some cash?”

You often hear this kind of criticism aimed at Batman, but I’d argue that good Batman stories do a better job of legitimizing Bruce Wayne’s life choices. They either emphasize the surreal nature of Gotham City, or they portray Bruce Wayne as a fundamentally warped individual. Conversely, Iron Fist wants us to accept at face value that Danny is a billionaire and a mystical kung-fu messiah and a genuinely kind person while ignoring his financial power.

Compared to Luke Cage’s citywide fame, it’s weird that no one recognizes Danny on the street. The Clark Kent effect goes a long way—no one expects their removal guy to be a CEO in disguise—but Iron Fist would be more fun if it acknowledged its hero’s notoriety. At the very least, the heir to Rand Enterprises should be a local curiosity. A target for conspiracy theories, maybe. Picture the scene: Iron Fist is fighting a villain in a subway station, when he notices a teenager filming him from across the platform. The next day, there’s a viral YouTube clip of Reclusive Billionaire Danny Rand beating up a ninja cosplayer. So fun! But I digress. There are only so many ways you can improve upon a fundamentally terrible show, and Iron Fist season 2 did its best. It’s just too bad that none of the characters are very interesting.

Why should we care about Danny Rand?

After the events of The Defenders, Iron Fist no longer has to deal with his nemeses, the Hand. Instead, he’s embroiled in a triad war, negotiating feuds with his business partners Joy and Ward Meachum, and reuniting with his childhood brother-in-arms Davos, who believes he should be the Iron Fist instead. Thanks to Black Panther fight choreographer Clayton Barber, the combat scenes now have real energy and style. However, none of the deeper conflicts offer any emotional weight.

Danny and Davos are meant to be a kind of Daredevil/Punisher rivalry, but Danny is an idiot and Davos isn’t scary, so who cares? Meanwhile, the Meachums don’t really warrant such a major role, even though Tom Pelphrey gives another strong performance as the petulant American Psycho wannabe Ward. As for the burgeoning gang war, it’s nice to see Colleen put down roots as a neighborhood social worker/vigilante, but the overall crime drama feels repetitious after Marvel’s other shows.

Mary Walker (Alice Eve) is the wild card this season. Introduced as an artist who befriends Danny on the street, there is (duh) more to her than meets the eye. She’s unsettlingly eccentric, with glassy-eyed mannerisms and opaque motives. Without going into spoilers, suffice it to say she’s based on the Daredevil comics character Typhoid Mary, a villain with Dissociative Identity Disorder—a dubious choice for an already controversial show (and a topic I’ll discuss further after the season airs). While Alice Eve is much more watchable than Iron Fist‘s other antagonists, Typhoid Mary is an inherently troubling depiction of mental illness, positioned alongside superpowered characters as a quirkily erratic woman with an “evil twin” split personality.

Among the original cast, Colleen (Jessica Henwick) remains the most engaging character. You can’t help but love the little smirk she wears when she kicks someone’s ass, and unlike Danny, she balances vigilantism with helping her community in constructive ways. Meanwhile, the show still doesn’t offer a convincing argument for Danny as a protagonist. He’s evolved past the whiny manchild stage of season 1, emerging as a chill bro with a good heart. But Finn Jones remains nondescript, and the show missed a trick by retaining its gritty atmosphere. Why not make Iron Fist a comedic counterpoint to the darkness of Daredevil or Jessica Jones? Why not just admit that it’s a corny kung-fu movie ripoff, instead of trying to be serious?

Iron Fist should have been canceled already

If you came here to find out whether Iron Fist season 2 is worth watching, the answer is still a resounding No. As for artistic analysis, I’m left with an overwhelming sense that this show is a huge waste of everyone’s time and money. Raven Metzner improved upon Scott Buck’s tedious and racist vision, but honestly, why bother? Iron Fist should have been canceled. In the absence of reliable viewing stats from Netflix, I refuse to believe many people actually watched it. And given its poor reputation, Iron Fist would be no great loss to the Marvel brand.

The franchise could easily have kept Danny as a guest character in other shows, freeing up time for a more worthy spinoff: She-Hulk, perhaps, or Daughters of the Dragon. Instead, Netflix invested millions of dollars in a show with nothing to offer. Iron Fist isn’t fun. It doesn’t have any deeper meaning, and its hero is as basic as a low-fat frappuccino. You can’t even watch it as mediocre background viewing like Law & Order, because you’re expected to follow a season-long plot. If Netflix has any sense of mercy, they’ll put this show out of its misery so Jessica Henwick and Tom Pelphrey can find better work elsewhere—and so I don’t have to review another damn season.