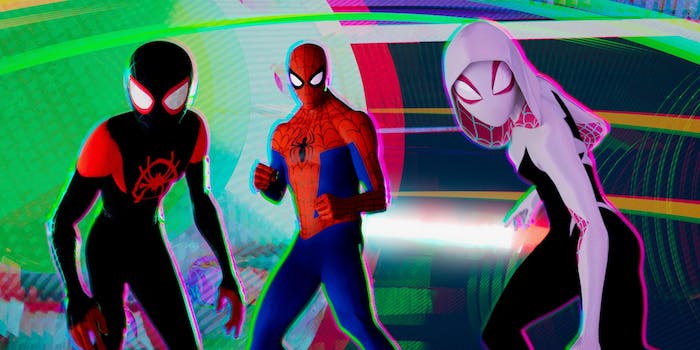 Spider-Man: Into the Spider-Verse/Sony Pictures Animation

What we can expect from ‘Into the Spider-Verse’ sequel

We now know when the long-awaited sequel to Spider-Man: Into the Spider-Verse will enter our dimension.

A second Into the Spider-Verse film was first confirmed weeks before the original film—which was critically lauded, a box office hit, and an Oscar winner—even hit theaters. Since then, Sony revealed that it’s exploring several Spider-Verse TV shows. But over the weekend, the official Into the Spider-Verse Twitter account posted a short video unveiling the release date for the sequel: April 8, 2022, giving the film a prime spot just before the summer blockbuster season kicks off properly versus a holiday release.

The first film’s directors—Peter Ramsey, Bob Persichetti, and Rodney Rotham—aren’t attached this time; Joaquim Dos Santos (Avatar: The Last Airbender, Voltron) is set to direct. David Callaham (Wonder Woman 1984, The Expendables) will write the script, and it’s expected that producers Phil Lord (who co-wrote Into the Spider-Verse) and Chris Miller will also produce the sequel.

But where exactly will it go? A lot of that is up in the air, and given that we won’t see the Into the Spider-Verse sequel until 2022, we’ll have plenty of time to wonder. But there are a couple of threads in the first movie that could lend itself to storylines in the sequel.

Each Spidey that Miles Morales met throughout Into the Spider-Verse showed him a different aspect of what it meant to be Spider-Man. But his two biggest influences easily came from Peter B. Parker, his reluctant mentor, and Gwen Stacy, who gave him the perspective of being a teenage superhero. The two obviously bonded during the movie: as Miles relays his “let’s do this one last time” monologue, we catch a glimpse of Gwen looking at a selfie she and Miles took, likely on the bus back to New York after obtaining the hard drive at the Alchemax lab upstate.

She also contacted Miles at the end of the film through some kind of interdimensional portal, asking him if he had a minute to talk. While Miles doesn’t reply, he does smile when she gets through.

The Spider-Verse sequel will tackle a romance between Miles and Gwen, Pascal told Vanity Fair last December. That particular thread was once part of Into the Spider-Verse, but it was ultimately removed to allow Gwen to be a friend to Miles.

“I will say that [producer] Christina [Steinberg] kept us honest,” Lord told Vanity Fair. “As five boys making a movie, it was really good to have another filmmaker there going, ‘I don’t think you guys want to do it like this.’”

Into the Spider-Verse introduced us to nine different Spider-People: the six who teamed up to take down Kingpin and destroy the supercollider that bridged their words, the Peter Parker that Miles knew, Miguel O’Hara (a.k.a. Spider-Man 2099), and the Spider-Man who Miguel meets on Earth-67.

Although Kingpin is in jail at the end of Into the Spider-Verse and the supercollider is destroyed, Miguel’s introduction in the post-credits scene reveals how the multiverse could possibly expand even further in the sequel. As the events of the film are taking place, Miguel’s AI Lyla is keeping tabs on things and lets him know that the multiverse didn’t collapse.

She’s also been working on a “gizmo” that would allow him to travel to other universes, although we’re not exactly sure why Miguel is interested in visiting other dimensions yet.

“But you could be the first person to make an autonomous multiverse jump,” Lyla says. “Or the last.”

While the most we see of that multiverse jump is the recreation of the Spider-Man pointing meme, so far it doesn’t seem like Miguel’s presence in Earth-67 is enough to destroy that world. So it’s possible that the next time that the Spider-Verse needs to get together to take on a bigger threat (and that Spider-Verse might even include even more Spider-People than we’ve already met), the very act of those heroes all meeting might not collapse all of their respective universes.