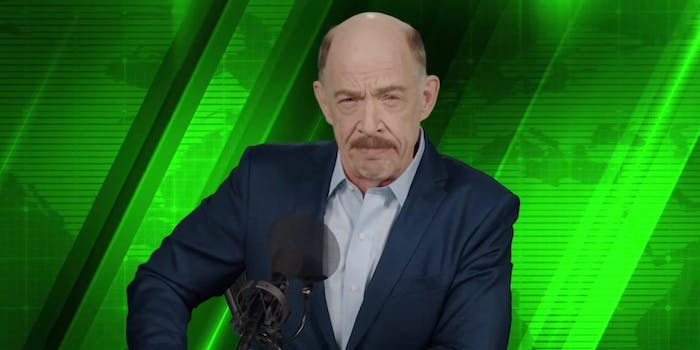 The Daily Bugle’s website from ‘Spider-Man: Far From Home’ is now real

The first Spider-Man: Far From Home post-credits scene gave us the mother of all cameos as a very infamous personality doxed Spider-Man’s identity to the world. But while the J. Jonah Jameson of the MCU is no longer in the newspaper business, his online home base is very much real.

Thanks to Sony’s marketing campaign for the home release of Far From Home, fans can now visit TheDailyBugle.net, which looks about as absurd as you’d expect, given what we’d already seen of Jameson’s web show. The web design is very much indicative of a different era on the internet, and at a glance, it shares some similarities with some real-world conspiracy-pushing websites.

The Daily Bugle’s website even leans into the film’s larger themes about misinformation, invoking “The war on fake news” as it positions Jameson as the person willing to cut through the crap to give readers what they really want: the truth.

The war on fake news has a hero: J JONAH JAMESON and THE DAILY BUGLE.NET! Where the tides of real news crash the shore of dangerous truth, the Daily Bugle will be there! Read the stories that the super-powers-that-be don’t want you to know! Stay informed! Be a real hero! Listen… to the BUGLE!

Of course, Jameson’s version of the truth is very far from the one we know. He believes that Mysterio is a true hero while Spider-Man is a menace onto the world; in an explainer, he named Night Monkey as another potential menace.

The Daily Bugle’s website is also a Blip Blog, which featured a quote from one of Peter Parker’s teachers, whose wife faked being Blipped to be with another man along with a stuntman who tried to sue for being injured from the Blip but was later revealed to have made the whole thing up.

As a marketing tool, it’s a very silly entryway into Peter Parker’s world, and it’s always good to see J.K. Simmons as Jameson. But in the MCU (and a post-MCU Spider-Man world), it’s probably not as funny to Peter—and we wouldn’t be surprised if the Daily Bugle was 100% a very successful website.