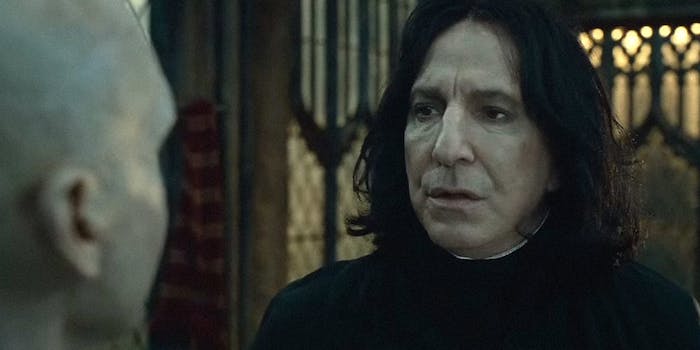 Could Professor Snape still be alive? One Harry Potter fan has a theory

Has this been under our noses this whole time?

Nearly 10 years after the publication of Deathly Hallows, Harry Potter fans are still analyzing and debating aspects of the series, and now one theory is leading some to question one of the story’s most impactful moments.

Throughout the books, fans had plenty of strong feelings about Severus Snape, the Potions master who’s hated Harry from the moment they first met. While those were already complicated by the fact that Snape killed Dumbledore in Half-Blood Prince, they became even more tangled with the revelation that Snape was a double-agent for the entire series because he was in love with Harry’s mother, Lily. Harry doesn’t find this out until after Snape’s death when he views his memories through the Pensieve.

However, one fan argues, maybe Snape didn’t die after all, which would certainly complicate the end of the series quite a bit. Posting to r/fantheories, DER_GOTTKAISER argues that Snape survived Nagini’s attack for a couple reasons: Snape wasn’t among the dead figures Harry summoned by the Resurrection Stone and he wasn’t mentioned among the dead in the morning after the Battle Hogwarts.

And would it really make all that much sense for someone like Snape, who’s so calculating and prepared, to meet with Nagini without some kind of protection to ensure his own safety?

“Just think about it, do you really think a POTIONS MASTER wouldn’t have access to anti-venom?” they wrote. “You think he wouldn’t have prepared for the possibility that Voldemort’s snake might turn on him?”

The idea that Snape lived isn’t a new one as one fan posited it back in 2007. But regardless of whether Snape would’ve prepared himself with an antidote before seeing Voldemort or would’ve survived Nagini’s venom (which nearly killed Arthur Weasley in Order of the Phoenix), there are a few conflicting issues at hand. For one, there’s a good reason why Harry never saw Snape come out of the Resurrection Stone along with Lupin, Sirius, Lily, and James: he had nowhere near the amount of affection for Snape as he did his other father figures. Sure, Harry might no longer believe Snape to be a traitor, but given the short amount of time between learning that and walking to what he thought was his own death, it’s doubtful he had time to process it properly.

As for the lack of Snape’s body in the aftermath of the Battle of Hogwarts, the only dead body from Voldemort’s side mentioned is Voldemort; not even Bellatrix Lestrange’s body got a mention. The victors—that is Hogwarts and the Order of the Phoenix—wanted to respect those they had lost. And Harry just killed Voldemort after a long and exhausting battle, so perhaps he wanted to rest up before taking care of cleaning up. (Or it happened off the page.)

The owner of the Elder Wand is an easier question, one which Harry covered in his final confrontation with Voldemort: It belonged to Draco Malfoy, who disarmed Dumbledore before Snape killed him, who was then disarmed by Harry.

Even outside of Deathly Hallows, Snape’s fate is pretty clear. In The Cursed Child, which is considered canon, an alternate timeline brings Snape back to life. Snape, who was still fighting with the resistance, helped Scorpius Malfoy fix the timeline after learning that Harry named his second son after him. (He also figured out that he’s dead in the main timeline.)

And there, not only does Snape offer his assistance, he agreed knowing that he would die again so that his pledge to protect Lily Potter’s son could be fulfilled.