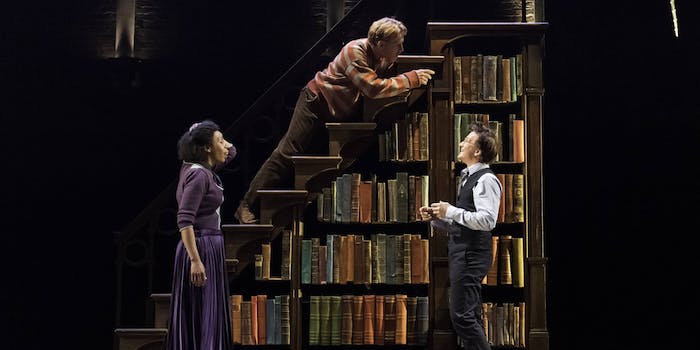 The eighth Harry Potter story brings your favorite characters to the stage.

Harry Potter and the Cursed Child, the eighth Harry Potter story, is finally here—and it offers a completely new take on the characters we grew up with. The two-part play, presented to most of us as a script instead of a show on the West End stage, mostly hits the mark, but not without a few pauses.

In the nine years since Deathly Hallows, fans have lived in and expanded J.K. Rowling’s world. They’ve crafted stories about what happened in quieter moments, those 19 years after the Battle of Hogwarts, the Marauders era, alternate universes, what House Albus Severus would be sorted in, and what kind of adventures the next generation of Potters, Malfoys, and Granger-Weasleys (as Rowling revealed in June, Ron Weasley and Hermione Granger hyphenated their surnames) would find themselves in.

So in some ways, Cursed Child feels like a Harry Potter story we’ve read before—and that’s not including the parts of the original series we literally revisit. That’s not necessarily a bad thing as it paints a vivid, colorful picture of Harry’s life more than 20 years after the end of the series. But at times, it can also slow down the play. As some fans have pointed out, the story of Cursed Child—a play written by Jack Thorne based on a story by Rowling, Thorne, and Cursed Child director John Tiffany—feels like fanfiction—like just one more of those stories written by those looking to escape into Hogwarts. As Rowling confirmed last year, however, Cursed Child is officially part of Harry Potter canon, albeit one not explicitly written by Rowling herself but with her input and approval. (Of course, that won’t stop fans from debating the issue in the days and weeks to come.)

The story of #CursedChild should be considered canon, though. @jackthorne, John Tiffany (the director) and I developed it together.

Cursed Child picks up the story right where we left off 19 years later on Platform 9 3/4. Albus, worried that he will be sorted into Slytherin, looks to Harry for reassurance. But Albus is sorted into Slytherin (though we don’t see the conversation between him and the Sorting Hat in the script) and is isolated from his fellow classmates, Rose Granger-Weasley, and his siblings (who both end up in Gryffindor); his only friend is Scorpius Malfoy, a lovably nerdy and awkward boy who is nothing like Draco. Scorpius is relentlessly bullied with rumors that Voldemort is his father instead of Draco (something that could easily be resolved with a DNA test if wizards ever trusted Muggle technology). Both Albus and Scorpius are living in their fathers’ shadows.

The adults have changed since we last saw them, but you can still recognize hints of their former selves within, especially as Harry begins to have nightmares that seem to hint that Albus is in grave danger. Draco is shaped after years of rumors and a life-altering tragedy we don’t want to spoil.

Both Albus and Scorpius are living in their fathers’ shadows.

The crux of Cursed Child rests on a quest made with good intentions (even if, given an ounce of input from someone like Hermione, it would be instantly ruled out as completely idiotic, dangerous, and illegal) involving a newly discovered prototype Time-Turner that can travel more than five hours into the past after a heated argument between Harry and Albus drives a wedge even further between them. Albus and Scorpius get their hands on it in order to prevent a character from dying more than 20 years ago, introducing a plot device that Rowling hoped to avoid in the original series. Naturally, it doesn’t go as well as it planned.

Cursed Child takes its time to introduce us to the main plot, which heavily relies on the events of a previous Harry Potter novel, and some of the creative choices may make some people raise an eyebrow. It misses some of the nuances of the original series, and the introduction of the show’s villain and all of the revelations it entails is clunky and heavy-handed.

But Cursed Child is also witty and funny, with a number of sequences that will charm and make audiences laugh. And like any other Rowling story, it sure knows how to tug at your heartstrings, whether it’s a montage of two people being kept apart, the return of departed characters, the sacrifices characters made for hope of a better life, or a strained relationship starting to heal.

The two-part show focuses significantly on friendship—Albus and Scorpius’s relationship is a highlight and will surely be analyzed in more detail as more fans finish the script—and the relationships between fathers and their children. And while that provides much of the weight of the play, it does so at the cost of developing some of the plays’ female characters. At times, Hermione and Ginny, both powerful witches with emotional stakes in the fight, have little to do. (For instance, we know little about how Albus and Scorpius interact with their mothers.) Rose, featured prominently in promotional photos, is immensely underutilized and not developed as much as other characters. The introduction of Delphi, a brand new character who sparks Albus and Scorpius’s quest, is handled well, but then she’s put on the sidelines for much of the play. One female character suffers a tragedy offstage while another is in a lesser position after a tweak in the timeline.

During Albus and Scorpius’s own set of adventures, which nearly destroy the wizarding world as we know it, Albus proves that he is very much Harry’s son. He’s similar in mannerisms, he displays some of the same strengths, and as one character points out to him, he has Harry’s weaknesses. He’s willing to sacrifice himself if that means saving the people he loves, and even if the story itself doesn’t hold, the emotional bonds between the characters pulls through. Scorpius is an enriching addition to the cast of characters who has to make a sacrifice of his own for those he loves, and the plays manage to give Draco, after all these years, a little redemption.

The script drives home the point that this is a story that needs to be seen, and some of the scene descriptions probably didn’t do the show justice. That’ll likely just make fans want to see it even more, and after its success on West End, we can only hope that Cursed Child will make it to Broadway and beyond or in movie theaters. And while Rowling insists this time—as she did back in 2007—that she’s done with Harry, there’s plenty of potential in new stories with the new kids—particularly Albus and Scorpius.

All was well? This time, it really seems that way.