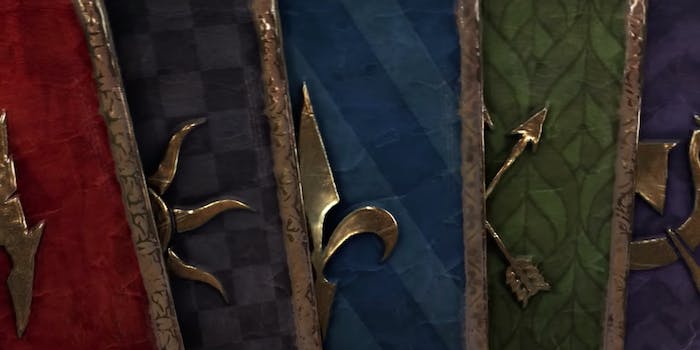 How to find and play Gwent from ‘The Witcher’

Get your Gwent on.

As fervor around Netflix’s The Witcher begins to die down, some of the series’ predecessors are gaining a new audience. Even Gwent, the card game buried in the books and The Witcher 3: Wild Hunt, is finding new fans.

Viewers of the show, starring Henry Cavill as Geralt, are discovering just how much Witcher content is out there. People are flocking to Andrzej Sapkowski’s novels, the award-winning video games from CD Projekt Red, and the spin-off comic books.

As new players swarm to Gwent, some find themselves a bit confused. The game isn’t overly difficult, but if you’ve never played turn-based card games before, it can be hard to get used to. To top it off, it’s not the easiest game to find—despite it’s recent launch online and in the iOS App Store.

Gwent is a two-player strategy card game. Sapkowski invented it and inserted it into his Witcher novels. The game was then adapted and added into The Witcher 3: Wild Hunt as a playable side-game. It found a passionate following there. Some players pull up The Witcher 3 just so they can win some money in Gwent. Hell, I’ve done it myself. The game is surprisingly fun, and once you get the hang of it, it’s thoroughly addicting.

Where to find Gwent

You can find the Witcher-themed card game in a number of places. The console version that many early players enjoyed is, unfortunately, no longer available. That is due, in large part, to CD Projekt Red’s desire to focus on the PC and mobile versions. Instead, players can find versions of the game online and in the iOS App Store. An Android version is headed our way soon, and fans of physical decks can track them down online.

The easiest and best way to play Gwent is on its official website. You can access the site on your iOS smartphone or tablet, or on a PC. Unfortunately, the game is not available to play on a Mac.

If you have a Nintendo Switch, you can purchase the spinoff card-based RPG Thronebreaker: The Witcher Tales, released in late January. The game adds a few new elements to the traditional Gwent format, and it costs $19.99.

Gwent is also available for iOS devices through the App Store. It is not yet available for Android, but according to CD Projekt Red, Android capability is coming soon. Apple users can enjoy the app on their smartphone or tablet.

They aren’t easy to find, but there are a few physical Gwent decks out there. The easier option, by far, is to play the game digitally, but some people just want to own a deck. If you don’t want to take the route I did and print off every Gwent deck, cut each card out, and laminate them by hand, don’t worry. There is an easier way.

There are a few—very expensive—decks available on Etsy. The site also offers several gorgeous Gwent boards, if you want to go all out in your collecting. You can also buy a full set from Ebay, where people offer a number of collectors sets and handmade fan decks. If none of these are affordable, Reddit user apuzalen flagged another game, Condottierre, which was an inspiration in creating Gwent. According to apuzalen, it is slightly more simplistic and far less expensive than most decks of Gwent cards.

How to play Gwent

The turn-based game needs two players to work, unless you choose to play a digital version. Each game is three rounds long. Unlike most card-collecting games, Gwent doesn’t have a mana system, so you’re going to need to pay close attention to the cards in your deck.

To begin, you’ll need to choose your faction. There are five to choose from: Northern Realms, Monsters, Scoia’tael, Skellige and Nilfgaard. Each deck has a distinct play style, so choose wisely. If you are looking to play a mostly defensive game with a few massively destructive gambits, go for the Northern Realms. Players looking to use the weather element to their advantage will do well with the Monster faction. The Scoia’tael faction has mostly dwarves, elves, and other nonhuman units. Skellige, one of the more complex factions, allows you to damage and resurrect your own units, and Nilfgaard will jibe well with players going for a more subtle approach.

Each player’s deck must contain at least 25 unit cards, but you only draw 10 of them before the start of round one. You have the option to redraw two. Before round two begins, you may draw two additional cards, and before round three you can draw a single additional card.

Each round of Gwent, players take turns placing cards until one of them passes. This indicates they are finished placing cards for that round. The other player may place as many additional cards as they wish. Note that you have a finite number of cards, so winning the first round may not be worth wasting all of your remaining deck.

Every card you play is placed on a particular spot on the board. The three main types of cards you will come across are Close Combat, Long Range and Siege. You add up the value of each card at the end of a round, and the player with the higher overall value wins. In addition to numerical values, some cards have special abilities. These can boost your other cards or be a detriment to your opponent, depending on how and when you play them.

Weather and leader cards change the game. Weather cards do not have numeric value, but they change the nature of the round. Think of them like modifiers, which, if played at the right time, can severely impact your and your opponent’s chances of winning Gwent. You can play multiple in a round, but use them wisely. Leader cards, on the other hand, can only be played once per game. They should typically be a last-ditch effort, and they have special abilities and boosts.