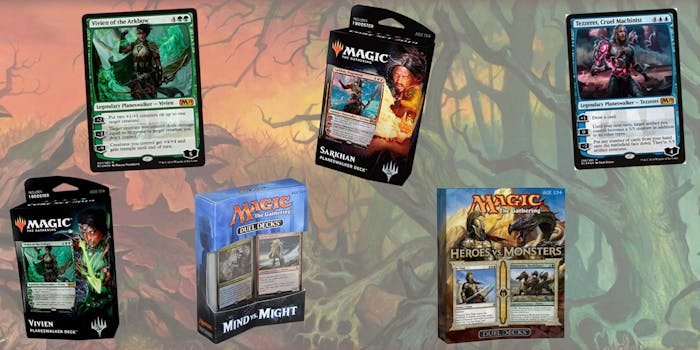 Magic: The Gathering: A definitive guide to MtG for beginners

Anyone can play Magic: The Gathering. Here's the path to becoming a MtG master.

Pokémon and Yu-Gi-Oh card games are for noobs and degenerates. True scholars pursue deeper games, like Magic: The Gathering, also known as MtG.

How to play Magic: The Gathering

To play Magic: The Gathering cards, you will need Mana. It comes in six land types: Forest, Plains, Islands, Swamp, Mountain, and Wastes. As you draw once a turn, you’ll acquire land cards as well as monsters, spells and more. To use these abilities, you’ll need to “tap” a certain number of lands on your turn. The catch is you can only add new lands to your side of the board once a turn. Easy enough, right?

Players begin each MtG bout with 20 life points. Once you hit zero, you’re done-zo. In order to keep your score up, you’ll need to play cards that can attack the monsters standing in your way. Once the path to your opponent is clear, your attacks hit their life score. It sounds simple–but there are thousands of variations on what happens between 20 and 0.

Magic: The Gathering decks for beginners

You can’t jump into the Magic: The Gathering field without a set of Magic cards. I suppose the bravest among us would jump in blind, assembling a deck out of loose booster packs. However, there are plenty of MtG cards available in starter packs, built with beginners in mind. It’s also built to spar, considering you can’t play Magic cards alone. Each of these Magic Duel Deck packs contains two MtG decks so you and a lucky friend (or despised enemy) can play the second you crack open a box. They even come with two deck boxes to keep your decks safe, crisp, and shiny.

In Beauty and the Beast and Magic: The Gathering, the tune remains the same. Tale as old as time, song as old as rhyme: brains and brawn. Which one reigns supreme among MtG cards? Human wizard Jhoira of the Ghitu heads up Team Mind, with a swarm of deep-sea creatures and sky leviathans in tow. If brute strength is more your thing, the Might Magic cards deck stars Legendary creature Lovisa Coldeyes, who powers up all Warriors, Barbarians, and Berzerkers.

In Magic: The Gathering, there are few monsters as fearsome as Planeswalkers. Each deck in this pack stars two of the nastiest creatures of this powerful category. Nissa, Voice of the Zendikar lets you draw cards for every land played, perfect for one-turn kills.  Ob Nixilis Reignited destroys creatures on command. Whichever deck you pick, you’ll know your opponent will be packing serious MtG firepower.

Are you betting on muscle-bound brawlers of legend, or the gargantuan beasts they slay? Regardless of where your loyalties lie, each Magic: The Gathering deck packs a punch. Batting for the heroes is the Sun Titan, who can revive powerful permanent cards. Its nemesis, Polukranos, World Eater, is such a bonafide monster it has the power to turn everything it touches “monstrous.” Even Planeswalker cards will cower in fear.

Yes, the name of these Magic: The Gathering card decks lay out the strategies within. Ezuri the Renegade Leader leads the pack of elves, with Goblin Wielder leading team Inventor. Elves come equipped with mechanical threats, while inventors wield destructive gadgets.

The latest and greatest duel deck pack pits Elspeth, Sun’s Champion against Kiora, Crushing Wave. Elspeth protects the multiverse with an army of the skies, while Kiora commands the oceans and it’s many fierce and battle-heartened creatures.

The Magic: The Gathering multiverse is sprawling, to say the least. These decks were designed by Chinese artists, inspired by their folklore and rooted in Chinese aesthetic. Jiang Yanggu’s nature army deck combines the delicate alchemy of fire and earth. Island Planeswalker Mu Yanling’s ability lets you take a turn after turn, making her as devastating as a tidal wave in all Magic games.

You’re a loner, Dottie. A rebel. For whatever reason, you want to blaze your own trail. This isn’t too big a surprise. As far as the Magic card game is concerned, champions are made alone. You could still get the dual packs listed above and have more than one deck to pick when it comes to creaming the competition. Or, if you’re more into a minimalist approach to winning at Magic cards, you can nab one of these single decks packs. Each pack includes a 60 card deck and a fresh booster pack, which may just come with even more powerful cards to pump up your new deck.

Planeswalker Tezzeret, Cruel Machinist heads up this deck. Granted, he’s so powerful he’s practically a deck in himself. He’s got the power to turn any card into cannon fodder to take down your enemies. It’s classic MtG beatdown at its best.

Quake in fear of the Huatli Dinosaur Knight. Rampage through your opponent’s fields with a cavalry of pre-historic baddies. A few extra Magic cards booster packs could easily turn this humble deck into one that deals out one-hit kills in the cutthroat Magic: The Gathering arena.

Magic: The Gathering wants you to build, baby, build

Are you indecisive as heck? Let fate decide where your Magic: The Gathering cards adventure will start. This pack comes with 125 randomized cards, four assorted booster packs, 100 land cards, and a full-art storage box. If you’re lucky, you can fashion together at least three different decks, maybe four. Whatever powerful cards you get will define your direction in all Magic games.