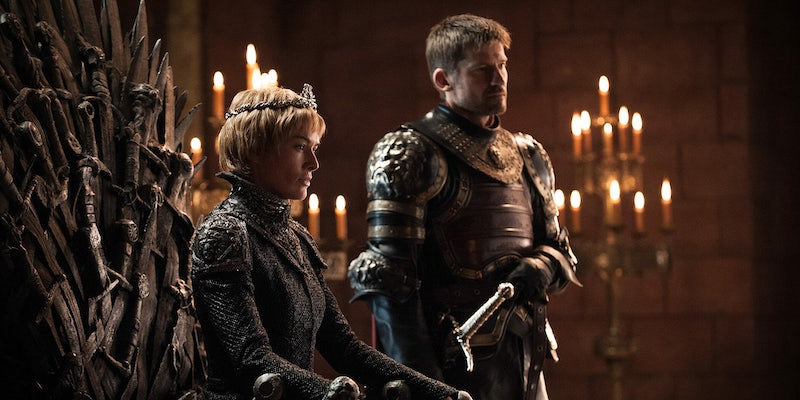 Now we know a little more about what's in store.

HBO released episode titles and descriptions for the first three episodes of Game of Thrones’ seventh season, finally giving us an idea of where the major players stand as the Great War is about to begin.

These descriptions have long been notoriously vague—even before the show surpassed the books—so mining them for information will only do so much. But with so little information released, Game of Thrones fans will latch onto anything they can. The synopses, along with episode titles and the names of each episode’s writers and director, are included below.

Most of the episode descriptions focus on the three major players of Westeros—Jon Snow, Daenerys Targaryen, and Cersei Lannister—while the other two surviving Lannisters, Jaime and Tyrion, each get a nod. Plot points of any other major characters are still under wraps.

The easiest one to gleam anything from is the season premiere, “Dragonstone.” It’s Daenerys Targaryen’s birthplace, where she’s finally returning after a lifetime away. In the most recent trailer we saw Daenerys approach and explore Dragonstone along with some redecorating in the form of removing Stannis Baratheon’s flaming stag banner.

“Stormborn” and “The Queen’s Justice” are a little more vague and have the potential for misdirection. While Stormborn is one of Daenerys’ many, many titles, it could also refer to Euron Greyjoy, who promised to murder his niece and nephew last season and now appears to be making an alliance with Cersei. Curiously, he said this to his older brother Balon just before killing him: “I am the storm, brother. The first storm and the last.”

“The Queen’s Justice” could refer to either Daenerys or Cersei, who both have plenty of justice to carry out against their enemies and those who have betrayed them.

As for character details? Jon’s “revolt” in “Stormborn” could refer to the wildlings who may not want to fight for him, the Northern houses who united underneath him, or from Sansa Stark herself, who didn’t look too happy about Jon being declared “King in the North” last season and has Littlefinger at her ear. Daenerys’ unexpected visitor and court holding could be in regards to the same person (and fans have plenty of ideas as to who that could be), or that in itself could be misdirection. And among the Faceless Men, death has been referred to as a “gift,” so Cersei’s gift might not bode well for somebody still in King’s Landing. (But will it involve Jaime learning from his mistake?)

We can also look to directors’ previous work to potentially see what might be in store. Podeswa and Mylod have directed four episodes each in seasons 5 and 6. Podeswa is responsible for “Kill the Boy,” “Unbowed, Unbent, Unbroken,” “The Red Woman,” and “Home.” Mylod’s previous credits include “High Sparrow,” “Sons of the Harpy,” “The Broken Man,” and “No One.”

HBO also released the season 7 synopsis, which hints at what we’ve long known: The war for the throne will ultimately mean nothing.

Daenerys Targaryen has finally set sail for Westeros with her armies, dragons and new Hand of the Queen, Tyrion Lannister. Jon Snow has been named King in the North after defeating Ramsay Bolton in the Battle of the Bastards and returning Winterfell to House Stark. In King’s Landing, Cersei Lannister has seized the Iron Throne by incinerating the High Sparrow, his followers and her rivals in the Sept of Baelor. But as old alliances fracture and new ones emerge, an army of dead men marches on the Wall, threatening to end the game of thrones forever.