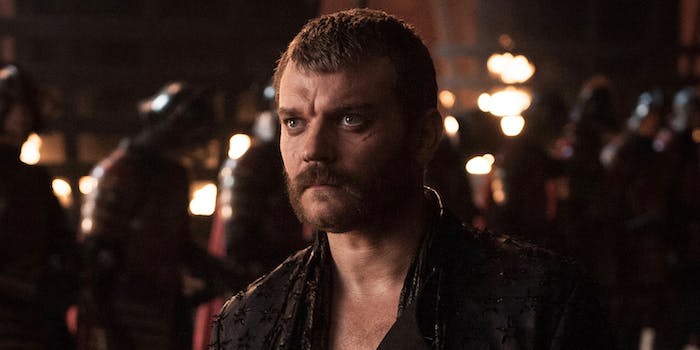 What kind of ‘gift’ will Euron Greyjoy deliver on ‘Game of Thrones’?

'Game of Thrones' has been full of all kinds of 'gifts.'

Warning: This article contains spoilers and speculation from Game of Thrones season 7.

The chess pieces are finally starting to move at the beginning of Game of Thrones’ seventh season, but one crucial piece is a complete wildcard with more than a few tricks up the sleeves of his starry jacket.

Euron Greyjoy, now with 1,000 ships in the Iron fleet, two working hands, a brand new look, and plenty of swagger to spare, propositioned an alliance and marriage with Queen Cersei Lannister. Although Cersei invited Euron to King’s Landing for a possible alliance to fight Daenerys Targaryen and her allies, Cersei openly expressed doubt in her ability to trust Euron. After all, he admitted to killing his own brother and still got elected at the Kingsmoot—so what would stop him from eventually turning on Cersei?

Jaime Lannister obviously doesn’t approve either, but Euron is determined to win Cersei over with something truly special.

“The surest way to a woman’s heart is with a gift,” Euron tells her. “A priceless gift. I won’t return to King’s Landing until I have that for you.”

Curiously enough, fans already knew a gift was on its way to Cersei well before Euron mentioned it. That’s because the description for the season’s third episode, “The Queen’s Justice,” reveals that Cersei returns a gift. It’s unclear if the gift is Euron’s or if he’ll be the one receiving it back, but until we learn more, it’s a fairly safe assumption it’s referring to the same gift.

As to what Euron’s gift could be is completely up in the air, but considering the kinds of “gifts” we’ve seen in Game of Thrones, it could be anything. Gifts have ranged from physical objects—like Dany’s three dragon eggs from Illyrio Mopatis—to a person or even death itself. There’s even a part of Westeros called the Gift, which is an area of land south of the Wall given to the Night’s Watch by the Starks of old. Although we doubt Euron’s going literal, any other option doesn’t bode well for much of anyone.

Will Euron’s gift be a person? (Or more than one person?)

The biggest gift in Game of Thrones to date was in the form of Tyrion Lannister, who Ser Jorah Mormont presented to Dany in season 5’s “The Gift” so she would forgive him. (She didn’t, but she kept Tyrion on as an advisor and promoted him to Hand of the Queen at the end of last season.) But he wasn’t the only one: Daenerys asked for the translator Missandei as a gift in Astapor after agreeing to buy all of Astapor’s Unsullied soldiers in season 3 (who Dany later freed). Littlefinger provided Olenna Tyrell with a gift, which is implied to be Lancel Lannister. Last season, Ramsay Bolton received Rickon Stark as a gift from the Umbers to prove their loyalty.

A preview for the season ahead released at San Diego Comic-Con reveal that not only does Euron return to King’s Landing, he looks triumphant and appears to be leading something—or someone—with a rope.

As season 7 demonstrates, there are a lot of people who Euron could potentially entice Cersei with.

Euron could show his loyalty by obtaining her brother Tyrion, who Cersei believes is responsible for the death of Joffrey Baratheon and Tywin Lannister. He would be a top prize only second to Dany herself, which would significantly put a damper in Dany’s quest to conquer Westeros. If Cersei “returned” Tyrion, she could send his head or corpse to Dany. Given reports of a scene that will reportedly air later in the season, that seems unlikely.

Ellaria Sand or one of the Sand Snakes, on the other hand, are more likely. They control Dorne, but Cersei’s vendettas against them are personal: They, especially Ellaria, are responsible for the death of her daughter, Myrcella Baratheon. It’d allow Cersei to get personal revenge and show the depths of her vengeance. If it’s a Sand Snake who gets captured, Cersei’s “return” of a gift could be a dead child from one mother to another. As characters go, they’re pretty expendable, giving plausibility to this theory.

Euron could even provide his own niece and nephew, Yara and Theon Greyjoy. As much as he wants to murder his own kin, something he’s pretty nonchalant about, letting Cersei do the job might potentially show his true loyalty: He’s giving up the one thing he’s sought apart from the Iron Throne. Cersei could similarly “return” the dead Greyjoys as a threat to Dany.

The preview for “Stormborn” features a shot of the fleet of Greyjoy ships at night, hinting at a potential battle ahead. Are they Yara’s or Euron’s?

“I am the storm, brother. The first storm and the last,” Euron said to Balon before killing him. Soon, he could come for Dany and her allies.

Another possibility, albeit one with less plausibility, could even be Gendry. As Robert Baratheon’s last living bastard son, he could—however indirectly—pose a threat to Cersei’s reign. How Euron would even know to look for Gendry, last seen rowing away from Dragonstone in season 3, is unclear. And if Gendry is the gift, where would Cersei even return him?

Even less likely is Euron getting his hands on a Stark. The Ironborn have a terrible track record of conquering land (and keeping it), so having them storm inland to capture Sansa Stark, Arya Stark, or Jon Snow probably won’t happen this soon.

Will Euron’s gift be an object?

In most other shows, this would be a no-brainer. Of course it’d be an object. But when a gift on Game of Thrones could literally be anything or anyone, going with an actual object seems unlikely.

The one object that comes to mind for some book fans is Dragonbinder, a horn that will supposedly make a dragon obey its master. Of course, it comes with fatal consequences: One man who blew it was found to have black lungs after he died. In the books, Dragonbinder is basically Euron’s trump card in the kingsmoot. Euron in the book promises the Ironborn they’ll have Westeros and dragons, whereas Euron in the show crudely promises to marry Dany and align her forces with his.

However, the Dragonbinder is probably a non-entity in Game of Thrones. We’ve yet to get a single mention of the horn in seven seasons, and we’re a bit late in the game to be introducing powerful instruments and weapons of this magnitude. Dragonglass at Dragonstone was planted in season 5, while the shards were introduced as early season 2. Even Samwell Tarly’s discovery of it at Dragonstone in the season 7 premiere included a direct callback to a previous conversation about it.

Same goes for the reappearance of the Valyrian steel dagger used in the attempted assassination of Bran Stark. That event occurred in Game of Thrones’ second episode, and the blade appeared multiple times throughout season 1 before showing up as an illustration in one of Sam’s stolen library books.

With only 12 episodes of Game of Thrones left in all (including the final season), it just doesn’t make sense for Euron to have a magical horn come out of thin air with little-to-no explanation. Plus, Euron wouldn’t need to lead a horn in with a rope.

Will Euron’s gift be death itself?

This is on the wackier side of possible outcomes, and far less likely to happen than Euron returning to King’s Landing with a person or item. But it fits far more than the others as far as payoff goes.

In season 6, the Faceless Man who appears to Arya as Jaqen H’ghar tells her about the origins of the Faceless Men, who were originally slaves in ancient Valyria. He, of course, was No One.

“The Many-Faced God taught him how to shed his face and how to give the gift,” Jaqen explained. “The man taught others in exchange for their service. Many served him. Many more gifts were given. Soon all the masters and overseers were gone and the Faceless Men fled.”

The gift Jaqen is referring to is death, and it’s “given” by the Faceless Men both as an act of mercy (to end one’s suffering) or when they are hired. The little girl whose face Arya stole to murder Ser Meryn Trant is an example of the former, while Arya’s task to kill Lady Crane is of the latter.

We’re not necessarily saying that Euron would hire a Faceless Man to kill Cersei, although it would allude to a book theory that Euron hired one to kill his brother Balon. (For one, Euron probably couldn’t afford hiring one to kill the Queen of the Seven Kingdoms because the cost would be too steep—and not necessarily a monetary one.) But he wants the Iron Throne, and if Cersei won’t have him by her side, he might just be mad enough to try and take it for himself.

Balon touched on some of Euron’s madness in their final, fateful encounter last season; he had heard that Euron lost his mind “during a storm on the Jade Sea.” If we’re to also take the Winds of Winter chapter featuring Euron and his younger brother, Aeron Damphair, into consideration, murder is only scraping the surface of just how twisted Euron Greyjoy really is. Book Euron is a kinslayer multiple times over, slept with his brother’s wife (precipitating her murder at the hands of her husband), and taps into dark sorcery and human sacrifice. How much of that will come into play in season 7 is still up in the air.

The logistics of a possible murder attempt would be murky, for sure. And given that Euron arrives in King’s Landing in the aforementioned preview looking victorious, it would be heading straight into tinfoil territory.

But if Euron is unsuccessful in his assassination plot, Cersei returning the gift—killing her would-be suitor—would very much fit into the mold of “Queen’s Justice.” For that to play out, one question remains: How big of a player is Euron Greyjoy in the end game?