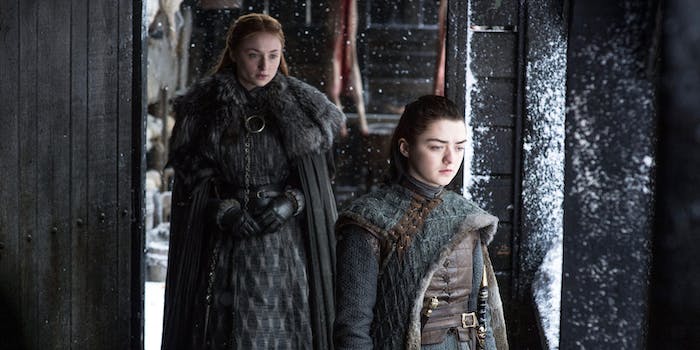 Arya and Sansa’s exhausting storyline could lead to something big

Is this just bad writing, or are they building up to something big?

For much of Game of Thrones’ seventh season, the fate of Westeros has been in the hands of the leaders vying for power. Cersei Lannister and Daenerys Targaryen (and their respective armies) have been fighting for the Iron Throne. Jon Snow, who called himself a king but doesn’t really want the throne, has sought out Daenerys’ help to take out the true enemy in the far north. Now that Daenerys has seen that threat for herself, she and Jon have to convince Cersei to stop fighting her long enough to defeat it. We’ve seen battles at sea, on a field of fire, and a frozen lake far from home.

And then, up in the North, you have the dark spot of season 7.

Even before Jon’s trip to Dragonstone and ill-advised venture beyond the Wall, Winterfell was a completely different beast this season than the rest of Westeros. It was home to a political dance we’ve mostly seen in King’s Landing, while the capital had some of that too with Cersei and Euron.

Both Jon and Sansa Stark had to keep the many Northern lords and knights of the Vale at bay while Cersei and Daenerys fought a destructive and expensive war down south. Sansa in particular had the thankless but completely necessary task of making sure Winterfell had enough provisions to keep the North fed once winter (and the true threat) arrive on their doorstep—even as the rest of her family started arriving home after several seasons away. And in the shadows lingered a masterful manipulator waiting to climb that ladder of chaos once again.

Petyr Baelish has been a more muted player this season after his unsuccessful attempts to work his magic on the Stark siblings. He can’t bribe Bran, Sansa won’t listen to his council as willingly anymore, and his attempt to talk to Jon about how much he loves Sansa resulted in a Ned Stark-style chokehold. So he’s using his one card left: to turn to previously warring sisters—Sansa and Arya—against one another.

While the Stark sisters’ reunion was mostly a happy one, that wouldn’t last. They had years of unresolved issues between them, and a deliberately placed letter by Littlefinger exacerbated it to the point where just two episodes later Arya threatened to cut off and wear Sansa’s face after accusing her of thinking of usurping Jon. As you do.

On the surface of those fights are the many, many traumas they’ve suffered throughout the past several years, and it’s certainly within their characters to still not quite understand one another. But, they’ll have to work it out if they’re going to survive the winter.

What we have instead is one of the more frustrating and inconsistent plots of season 7. Both of them have witnessed Littlefinger’s scheming and should know better, but they both appear to have fallen into Littlefinger’s trap. There’s also a certain amount of hypocrisy involved in the less-than-believable escalation.

Both Arya and Sansa were there for Ned’s execution, but Arya only remembered Sansa’s dress and fancy hair, not Sansa’s protests when Joffrey called for Ned’s head. And while Arya called out Sansa for writing the letter on the Lannisters’ orders, she forgot to mention that she spent the better part of season 2 serving a Lannister at Harrenhal. Sansa’s openly stated that she doesn’t trust Littlefinger, but when Arya confronts her with the letter, Sansa seeks his advice.

And of course, Bran Stark is around for absolutely none of this, having spent most of his time next to Winterfell’s weirwood tree since arriving back home.

So what’s really going on? Are Sansa and Arya working together to outplay Littlefinger? Are they both falling for his ploy hook, line, and sinker? Is there a master plan at work—or is this another example of poor writing? With only one episode left this season, we may soon find out.

Arya and Sansa are both playing Littlefinger

For some fans, the only way any of the Winterfell drama makes sense is if they both realized Littlefinger is behind everything. They believe the sisters have been secretly plotting behind the scenes for the better part of two episodes to take him down, which would all culminate in the season 7 finale.

Sansa has not trusted Littlefinger since he sold her off to the Boltons, and even a victory at Winterfell won’t change that. She’s dismissive and almost impatient with him in their conversations. She called out his signature final move—a clever remark—and confesses to Brienne of Tarth that the only reason he’s still around is that she needs his men. Plus he’s clearly not winning anyone over by telling all of the Starks how much he loved Catelyn (and he’s clearly now aiming for Sansa).

Arya’s also seen Littlefinger’s scheming first-hand. She may not have been coached in his games like Sansa has, but she was at Harrenhal when Littlefinger visited Tywin Lannister in season 2 where he and Tywin talked about scheming against Robb Stark.

All of their arguments have taken place in and around Winterfell where others can hear them. They’re located in balconies where others can see and hear them, and in the case of Arya’s Game of Faces, they’re in a room with an open door. Although it might not have been planned, some of their more revealing—and calmer—conversations have been located in areas where it’s harder to spy on them such as Winterfell’s crypts. It’s only at the weirwood tree with Bran that Sansa speaks freely about Littlefinger in front of Arya and tells them that he “is not a generous man” and “wouldn’t give you anything unless he thought he was getting something back.”

We don’t see Arya reveal where she found Sansa’s letter, but she could’ve possibly revealed off-screen where she got that letter. From there, it’s only a matter of luring Littlefinger into a trap and doing what nobody has managed to do before: knock his ladder down.

Despite not trusting Littlefinger at all, Sansa sought his counsel after Arya confronted her about the letter. Although he voices doubt that Arya would betray her family, he does bring up a possible conundrum that might play out: Brienne is sworn to protect both of them?

“And if one of you were planning to harm the other in any way, wouldn’t she be honor-bound to intercede?” Littlefinger asked.

Later in “Beyond the Wall,” Sansa sends Brienne and Podrick Payne to King’s Landing to represent her in the great meeting that will take place there. Brienne advised against it—who will protect Sansa from Littlefinger when she’s gone?—but Sansa coldly orders her to go anyway.

It’s possible that Sansa saw right through Littlefinger when he mentioned Brienne of Tarth. If Sansa and Arya were to go at each other’s throats, Brienne would have to intercede and possibly kill one of them. And we all know which one he’d prefer dead. Sansa sent her away so that Brienne’s loyalty couldn’t be used to take Arya out.

On the other hand, Arya’s inconsistencies during the Game of Faces could reveal that she knows something is up. She may not have seen Sansa beg Joffrey to stop Ned’s execution but she almost certainly heard it and later saw Sansa faint. She also knew she served the Lannisters at Harrenhal, because it was better for her to play along and live, but she kept that to herself.

The game may have been a test: In the end, Arya hands Sansa to knife, essentially asking her to make a choice.

This season has sprung plenty of theories about how Littlefinger’s latest scheme will play out, that’s for sure. Are they both playing him? Does one of them know what he’s up to? Has Arya actually been wearing Littlefinger’s face since she got back? (That one is seriously doubtful, least of all because we hope the show will show us Littlefinger’s death whenever it happens.)

Perhaps the real solution may be the simplest one: Both Arya and Sansa are being played by Littlefinger until they learn the truth from someone else—or become ensnared and doomed to die like their parents.

It wouldn’t be the first time that all of our theories led to an unsatisfying conclusion. Last season, Arya fell into the water and ran away from the Waif after the Waif stabbed her multiple times in the gut. Arya should’ve probably died, but she managed to find herself shelter. Leading up to that—and far more after the episode—fans started to piece together what would happen next. Was this a test on the Waif and Arya was actually Jaqen? Did Arya fake those injuries? Is Arya actually a part of “Braavosi Fight Club” and fighting herself? And why did the Waif hate Arya so much in the first place?

In the end, it was all for nothing. Arya did get stabbed, magically survived her wounds, and the Waif just hated Arya for no reason. It was unsatisfying, didn’t make much sense, and it left fans wondering why we even spent so much time there if it was only so Arya could learn a new trick.

Depending on how the Winterfell political struggle ends, it could be more of the same. And it may point to a larger issue in the series: its inconsistency in writing female characters, particularly when they’re interacting with one another.

“The lone wolf dies, but the pack survives”

In one of the trailers for season 7, Sansa is heard quoting a line that fans of A Song of Ice and Fire will find very familiar.

“When the snows fall and the white winds blow, the lone wolf dies, but the pack survives,” she said.

At the beginning of the season, some took it as an indication that a rift between Jon and Sansa over control of Winterfell might grow after she didn’t look too pleased at him rising up to King in the North. With most of the season behind us, it’s starting to look like a more appropriate line for the Stark sisters—and much more in line with its book counterpart.

The line didn’t make it into the show, but occurs in one of the first season’s heartfelt moments. Ned visited Arya in her room a short time later and discovered that she has Needle in hand, leading to a heartfelt discussion between father and daughter. With winter and enemies coming, Ned stressed how important it was for Arya and Sansa to stay united instead of fighting amongst themselves.

“You may be as different as the sun and the moon, but the same blood flows through both your hearts,” Ned told her. “You need her, as she needs you … and I need both of you, gods help me.”

In order for Sansa and Arya to defeat Littlefinger, they’ve got to unite on one front. Although Bran is more Raven than Stark now, he may even still have a role to play. One wolf might not be able to take him down. But when three wolves—a capable ruler, a killer assassin, and a raven who can potentially access all of time—band together?

Littlefinger might just regret ever trying to bring his southern chaos into the North.