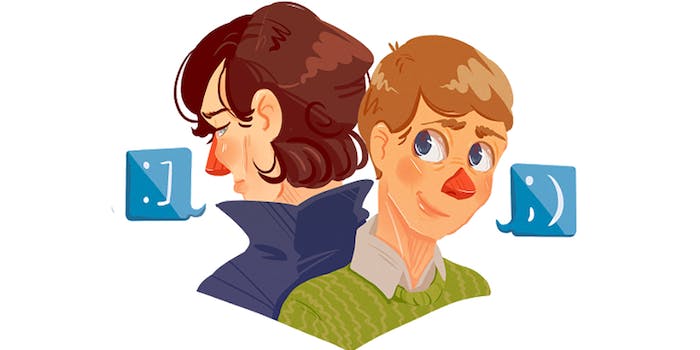 A Finger Slip is one of the most popular "Johnlock" stories online, and it's about to come to life.

By the time you finally view it, it will have been over a year in production.

Or over 200 years, if you’re keeping track of the canon. But that’s a little tricky when you’re talking about a webseries that’s based on a fanfic that’s based on another fanfic of one of the greatest love stories of all time.

I’m talking, of course, about the epic love story of Sherlock Holmes and John Watson, and the new webseries that’s about to reveal a side of them you’ve only read about before.

Although members of the BBC Sherlock cast and crew have confessed themselves baffled by the prevalence of “Johnlock” fanfic, slash fanfiction for the pairing has existed throughout the decades in numerous incarnations.

Now, thanks to one Kickstarter campaign and a team of devoted fans, Johnlock fanfiction is taking a new step forward. One of the most popular works of Sherlock fic on the Archive of Our Own, Pawtal’s A Finger Slip, is being turned into a fan-scripted, fan-produced and fan-acted webseries.

One of the unique things about A Finger Slip, apart from the fact that it’s one of the most popular works on AO3, is that it’s written entirely in dialogue—all 45,000 words of it. It’s also an AU—an alternate universe fic in which Sherlock and John aren’t actually detectives (at least not yet). In A Finger Slip, they’re in college, and meet accidentally via text after one of them sends the other a message meant for someone else:

All of these elements should make the webseries an interesting take on the “fan film,” a fan-made film based on a previously existing work. Few if any fan films based on fanfiction exist, and even fewer are based on slash fic. But slash is exactly the sort of fanwork that’s ripe for adaptation, because slash fans so rarely get to see their beloved queer love stories play out anywhere outside their own fanfic communities.

The project is the brainchild of 19-year-old Michigan film student Naomi Javor, who shared with Sherlockians on YouTube that A Finger Slip was her favorite fic:

“My goal in life is to become a director that makes film adaptations of books, and I think that turning a fan fiction into a series or seeing it onscreen is a great place to start… I’ve seen lots of people saying, ‘I wish we could watch fanfiction,’ and so I think we should revolutionize our fandoms, and this is where I’m starting.”

“This is a fanfiction that everybody’s been wanting to see done,” says Cody Quin, the actor playing Sherlock. “I’m excited about this project because I can tell the passion everybody has for it.”

If the project funds, which seems likely, fans will still have to wait a while for the finished version. Javor has been working on the project since May of last year, footing the bill herself for costumes, sets, and other extras. Now, the project seeks actors as well as fans. On the project’s Tumblr, they note that they want to produce and release the first episode by October. It’s an ambitious timeframe, but one the producers feel confident they can meet.

After all, where better to look for improbable feats than a fandom devoted to Sherlock Holmes?

Illustration by Voodooling via Kickstarter