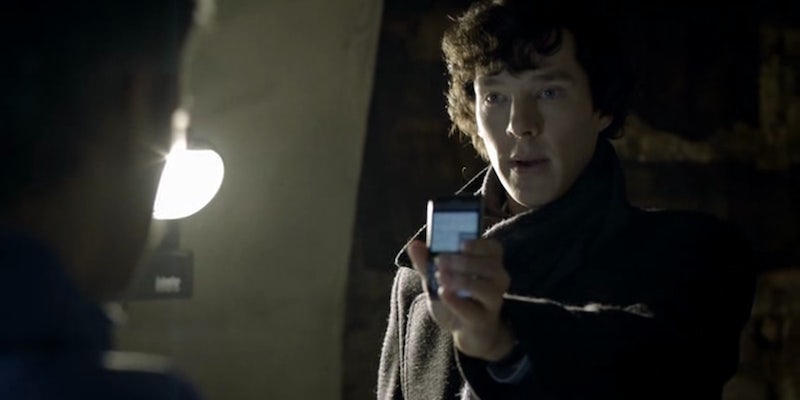 This new iPhone game could help treat your ‘Sherlock’ withdrawal

This game could expand the Sherlock canon while fans wait for new episodes.

Sherlock’s third season may be over, but fans need not feel quite so bereft as before. On Jan. 20, Sherlock production company Hartswood Films and transmedia creators The Project Factory will be releasing an iPhone game based on the show.

Sherlock: The Network follows on from the most recent three episodes, and is an immersive mystery-solving game in which the player is part of Sherlock’s “homeless network” of investigators and informants. The aim is to help John and Sherlock with 10 new cases by traveling around London on foot, by underground or by taxi, and gathering evidence by speaking to other characters.

The show’s executive producer Sue Vertue described The Network as “an impressive, innovative way for [fans] to immerse themselves in a bit of Sherlock’s world whilst waiting for us to make more shows,” while creative director of The Project Factory, Rob Barnes, said, “The scripting, approach and case structure reflect the television program, keeping the mysteries flowing.”

This app looks a lot more promising than the BBC’s current interactive Sherlock content, which includes John Watson’s blog and Sherlock’s “Science of Deduction” website —which has never been very popular with fans, since it includes easy-to-solve “mysteries” that Sherlock supposedly wants people to “help” him with.

Sorry, BBC: We all know that Sherlock Holmes does not ask for help.

Of course, The Network doesn’t even need to be all that amazing for Sherlock fans to buy it in droves when it arrives in the App Store next week. Not only does it promise 10 cases worth of new canon, but it includes exclusive new video content with stars Benedict Cumberbatch and Martin Freeman.

And considering the lengthy wait between seasons two and three? We’ll take all the new Sherlock we can get our hands on.