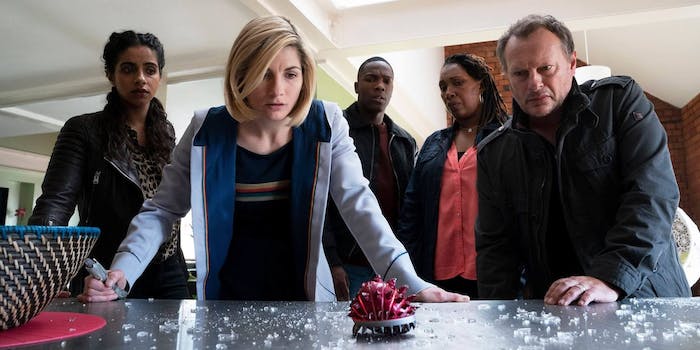 Why this week’s ‘Doctor Who’ is essential viewing

This one big spoiler should persuade you to watch the episode.

In order to explain the brilliance of this week’s Doctor Who, I need to spoil one massive twist. It’s a real headline-grabber, but here’s the crucial thing: even if you know it in advance, the episode still rules. This isn’t a big, shocking revelation that feels kind of stupid and overblown in retrospect, like (let’s face it) a lot of Doctor Who twists in the past. It’s the real deal, and if you read on, I’ll explain why—without spoiling anything else. Even if you haven’t watched in years, it’s time to tune back in for this one.

In “Fugitive of the Judoon,” the fifth episode of season 12, guest star Jo Martin is revealed to be a new incarnation of the Doctor—the first Black actor to take on the role. Initially introduced as a human called Ruth Clayton, she turns out to be the Doctor in disguise, echoing the season 3 episode “Human Nature,” where the Tenth Doctor (David Tennant) wiped his own memory and temporarily lives as a human.

Casting a woman of color as the Doctor is the kind of choice we’ve come to expect from showrunner Chris Chibnall. He’s spent the past two years recruiting a diverse cast and creative team for a show that was mostly written and directed by white men in the past, co-starring a white man and (usually) a younger female companion. The current lineup is far more inclusive, with Sacha Dhawan as the latest high-profile addition, playing the Doctor’s nemesis the Master.

All that being said, we know Jo Martin probably isn’t “the new Doctor,” because Jodie Whittaker already signed up for a third season. Martin is (for now) a guest star, meaning her role had the potential to feel like a gimmick, briefly shaking things up before returning to the status quo—the equivalent of Marvel making Sam Wilson into Captain America, before putting Steve Rogers front and center again. It’s easy to imagine this storyline playing out in a problematic way under Doctor Who’s last showrunner, but it works differently in the Chibnall era. First of all, the show’s cast is now much more diverse across the board. And secondly, this episode is just really, really great. It’s certainly the best hour of Doctor Who I’ve seen in years, and much of it is driven by Jo Martin’s charisma, playing (for all intents and purposes) two equally entertaining characters in the space of one episode.

Written by Chibnall and Vinay Patel (who wrote “Demons of the Punjab” last season) and directed by Nida Manzoor, the episode is perfectly pitched for this kind of splashy, character-focused storyline. Set in contemporary Britain, it’s a straightforward adventure without any complicated worldbuilding or social commentary. So instead of having to introduce a new setting in the first act, the episode can focus all its attention on making us fall in love with Jo Martin’s human persona, Ruth. Relationships and emotional arcs are in the foreground, which is why (as I can personally attest) it’s just as entertaining if you’ve already been spoiled in advance. Caught up in a classic alien invasion thriller, Ruth is a funny, likeable co-protagonist in her own right, so it doesn’t feel like we’re just waiting for her to turn into the Doctor. Of course, she’s even more brilliant as the Doctor, giving Jodie Whittaker the unusual role of playing second-fiddle to another hero.

Considering how often Doctor Who spoilers get leaked in advance, it’s a genuine miracle that they kept Jo Martin’s casting under wraps – and avoided revealing the episode’s second, equally surprising twist. If that isn’t enough to get you to watch, I don’t know what to tell you.