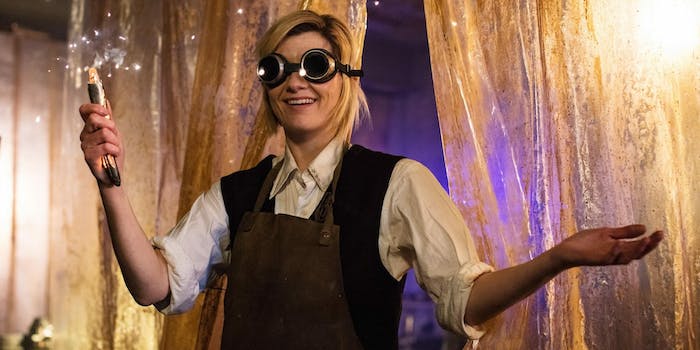 Season 11 begins with a powerful message about change.

This review includes spoilers for the Doctor Who season 11 premiere, “The Woman Who Fell to Earth.”

Doctor Who is the only show to air a new pilot episode every few years, introducing a fresh cast and delivering a manifesto for the show’s continued existence. “The Woman Who Fell to Earth” faced extra pressure as the debut for Jodie Whittaker and showrunner Chris Chibnall, and—thank God—it’s a triumph.

The Thirteenth Doctor arrives with a confident grin and a familiar eccentricity, embarking on an adventure with refreshingly human stakes. A mysterious alien menace has appeared in the Yorkshire city of Sheffield, just as the Doctor crash-lands with a faulty memory and a newly regenerated body. She welcomes her new identity with cheerful aplomb and immediately begins to do what the Doctor does best: make friends, save the day, and give a heartfelt speech in the final act.

Our new companions are 19-year-old Ryan (Tosin Cole), trainee traffic cop Yasmin (Mandip Gill), and Ryan’s step-granded Graham (Bradley Walsh), joined all too briefly by Ryan’s nan Grace (Sharon D. Clarke). Adventurous and caring, Grace is a perfect fit to travel with the Doctor, and so she inevitably dies by the end of the episode. (The other three, with all their doubts and insecurities, still feel like they’re at the beginning of their story, which is why they get to stick around.) I’ve seen some understandable pushback against Chibnall killing off a Black woman in his first episode, and I suspect he and the BBC were ready for the criticism. Instead of airing a full-season trailer after the episode, the BBC showed a highlight reel of guest stars showcasing the most diverse cast in Doctor Who history, as if to reassure viewers, “Don’t worry, we get it.”

Ryan, Yasmin, and Graham already have more solid characterization in one episode than Clara did in her entire first season. That’s not the only obvious shift under Chibnall’s leadership. Aside from my general distaste for Steven Moffat‘s chronic sexism, much of his Doctor Who tenure was, well, exhausting. Obsessed with high-stakes storylines and breakneck twists, recent seasons routinely collapsed under the weight of Moffat’s ego. By comparison, the new era feels positively chill. While the Doctor is as energetic as ever, the rest of the show balances her out. The companions are normal people, and the setting offers a kind of low-stakes authenticity we haven’t seen since Russell T. Davies. With an appropriately fast pace and a warm sense of humor, this is a simple story without any flashy twists. And it’s noticeably free of ego—an idea that’s baked into the text of the episode.

A celebration of everyday heroism

When the Doctor first arrives in Sheffield, we meet a fifth potential companion. Carl (Johnny Dixon) is a thoroughly average man who, unlike the others, has no interest in sticking around after the Doctor saves him from an alien attack. He’s there to highlight the courage and curiosity of the other characters. But as it turns out, Carl has a further role to play. The alien invader is a Predator-esque hunter, tasked with a mission to abduct a randomly selected human: Carl.

When we see Carl again, he’s listening to an inspirational audiobook telling him he’s special and important—a joke with a sincere edge, because while Carl is a thoroughly boring person, his role ties into an ongoing theme in Doctor Who. Everyone is important, and no one is expendable.

The Doctor and her new friends risk life and limb to save Carl’s life, and as he flees to safety, he shouts his new mantra: “I am special! I am brave!” Except when push comes to literal shove, we see how Carl really differs from someone like Grace or Yasmin—people who genuinely want to help. After the Doctor outwits the alien villain, Carl kicks him off a crane to (as far as Carl knows) certain death. The Doctor is disgusted that he’d resort to violence when they’ve already won, revealing the dark side of Carl’s new motto. He’s utterly self-absorbed, first in his fear and later in his newfound bravery, focusing on his own specialness while the other characters work together to save a total stranger.

The message here is that Carl is a dick in a very average kind of way, while Grace, Graham, Ryan, and Yasmin are also pretty average. They’re normal and they’re heroic because while Doctor Who includes its fair share of supervillains, it always returns to the idea that anyone can do good. Rejecting the idea of exceptional heroism, it’s all about trying, and the new companions embody this idea to a tee.

Ryan’s subplot involves him struggling to ride a bike because he’s dyspraxic, while Yasmin wants to prove herself at work. As the voices of experience, Grace and Graham’s roles involve tapping into existing resources, as they use their social networks (Grace as a nurse and Graham as a retired bus driver) to track the alien threat. No one needs any superhuman skills to help save the day, and when the time comes for the Doctor to build her new sonic screwdriver, she makes it by melting down some old spoons. “Sheffield steel!” she exclaims. During the Moffat era, the equivalent scene would probably involve an epic quest to harvest the heart of a dying star.

Change we can believe in

“The Woman Who Fell to Earth” is a strong opener for all involved, but there’s one particular moment that will linger for years to come. You can’t have a Doctor Who premiere without a big speech introducing the new Doctor’s philosophy, and this time she delivers a message about change and acceptance:

“We’re all capable of the most incredible change. We can evolve while still staying true to who we are. We can honor who we’ve been and choose who we want to be next.”

Along with being wonderfully succinct (most Doctors are notorious ramblers), there are several layers packed into this scene. In the text of the show, she’s trying to persuade the villain to stop harming humans. She’s also recovering from her regeneration, still figuring out what kind of person the Thirteenth Doctor will be. Jodie Whittaker lives up to the extensive hype, a charismatic figure who combines the Doctor’s zany energy with an extra dash of compassion, sticking around once the dust has settled when David Tennant or Peter Capaldi would have jetted off to the next big adventure. “I’m the Doctor,” she announces, setting our expectations for the rest of the season. “Sorting out fair play throughout the universe.”

The Doctor embodies change, switching personalities and showrunners every few years.  She also nurtures change in others, encouraging her companions to reach their full potential. She wants people to approach life with an open heart, and her latest iteration arrives with an extra subtext regarding gender identity—a transition the Doctor embraces with enthusiasm. On top of all this, her big speech makes an explicit statement to Doctor Who fandom. When she says, “We can evolve while still staying true to who we are,” she’s speaking to the fans and to the show itself. Whittaker’s casting inspired a predictable sexist backlash, but after watching this episode, it’s impossible to argue that she’s anything but the Doctor. Her role is an evolution, not a reboot or an erasure of past success, and the DNA of the show remains obvious to anyone who cares to look.

“Grounded” is a popular buzzword among TV writers, hinting at heavy themes and a lack of frivolity. Yet for all its whimsicality, this was the most grounded Doctor Who we’ve seen in years. Moffat was a “go big or go home” kind of storyteller, enamored of epic manpain and calamity. His human characters were often oddly implausible, like Clara’s incoherent background and Amy Pond’s inexplicable job as a “kissogram” in a small English village. In other words, often dark but rarely grounded in anything real.

Chibnall returns the show to its more relatable roots, reminding us of something that isn’t always obvious to American viewers: In the U.K., Doctor Who isn’t a nerd show, it’s family appointment TV. It’s meant to represent contemporary Britain, which in this case means a clear message about diversity and class. The new companions are all explicitly working class, have normal-person problems like cancer and crappy jobs, and speak with Yorkshire accents. In the British TV landscape, this kind of character is more likely to appear in a soap or a gritty drama than a lighthearted fantasy show, which makes Doctor Who feel especially important. It hammers home the point that you can have an impact on the world and, crucially, have a good time, no matter what your background. Anyone can share an adventure with the Doctor; the only obstacle is selfishness.