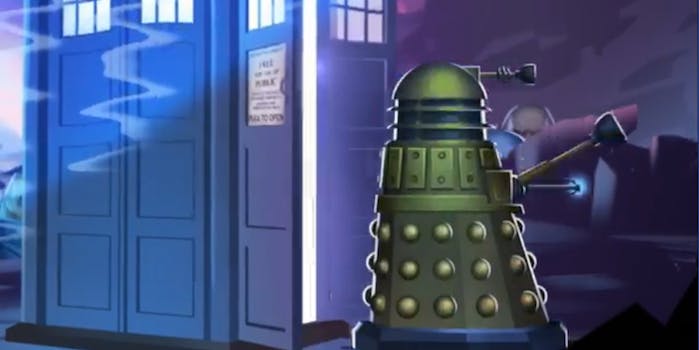 ‘Doctor Who’ wants to teach British kids how to code

The Twelfth Doctor and his nemesis are combining forces to teach kids computer programming language.

The Doctor is in trouble, and only the Whovians of Britain can help save him in a new online computer game designed to help kids learn to code.

Debuting tomorrow, the BBC’s new web game, The Doctor and the Daleks, will tie in with the current series and feature nifty tips and tricks that can help kids master the basics of html coding. Written by series writer Phil Ford, the game will present kids with a series of puzzles that are actually steps to conquer basic programming skills.

The plot of the game involves the Doctor attempting to save one of his enemies, a Dalek, by working to reboot the Dalek to its full powerful potential. The game will also feature animated depictions of a few alien landscapes that have never been featured in New Who before, including scary-sounding climes like the Clone Chambers of Sontar and the Cyber-tombs of Telos. A preview clip of the game shows the Dalek powering through various landscapes and helping the Doctor to save the world:

Peter Capaldi himself contributed voice effects for the game. A press release issued on the BBC website today also had a personal call from the Twelfth Doctor:

“Oi! Short and not-very-old one! I need your help – I’ve got a Dalek and we’ve got a mission to save the universe. So get on over to the CBBC website, and play The Doctor and the Dalek while there’s still a universe left! Come on! Chop chop!”

Unfortunately for us older kids overseas, the BBC game will only be open to kids in the U.K. It’s part of a larger computer curriculum that the BBC is encouraging British classrooms to use. The British tykes will also be treated to a special Doctor Who story written for the occasion.

The rest of us will just have to be content with our weekly Sunday episodes like everyone else.

Screengrab via the BBC