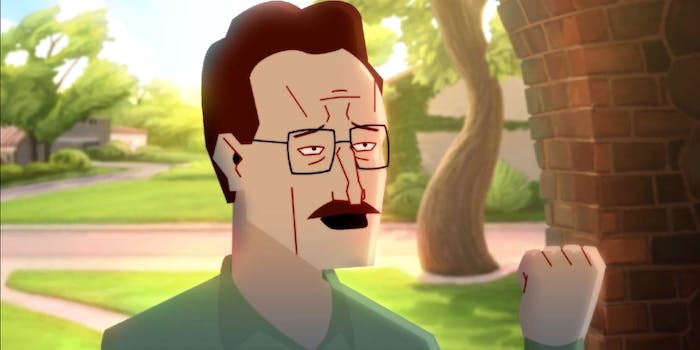 Breaking Bad and Frozen are two pop cultural phenomenons that have been parodied, remixed, and crossed over with just about everything in the universe—except each other. Until now, that is.

Fresh from ordering us to effing eat already, Walter White lends his dulcet tones to one of Frozen‘s signature anthems, “Do You Wanna Build a Snowman?” in a new animated short that sees the self-made drug kingpin showing up at the door of his favorite lackey, Jesse Pinkman.

The video creator, Animeme, is best known for giving us unlikely rap battles between Internet memes. Breaking Bad and Frozen are both so popular they’ve become cultural memes of themselves at this point, so it makes a strange sort of sense that they’d be brought together. Except since there’s no telling who would win in an Elsa-versus-Heisenberg duel-off, Animeme has skipped the fighting and gone straight for the sentimental link.

Given that Walter White is terrifying at the best of times, and that Frozen is actually a Stephen King novel, you’d think this crossover would be a kind of grim gothic life-or-death standoff. Instead it’s suprisingly poignant, probably because Walter White’s warbling voice tends to quaver with emotion when he realizes it’ll take more than singing to get Jesse to open the door.

We already knew Breaking Bad makes a great opera. Now we know it’s got the potential to pack up and head to Broadway. Hey, we’d buy tickets.