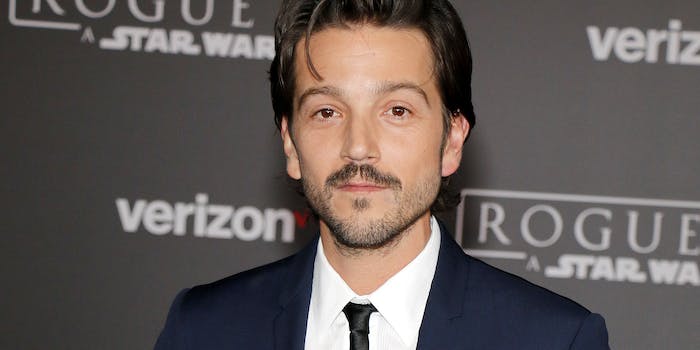 Let him do it, Lucasfilm.

Most major franchise press tours have minor hints and teases, but nowadays they’re more about showing off a movie’s charming the cast than revealing big parts of the movie. That’s certainly the case for Rogue One between Ben Mendelsohn discussing Director Orson Krennic’s cape in great detail and Mendelsohn’s camaraderie with Mads Mikkelsen, but one of Rogue One’s stars is having his moment with his very Star Wars-esque request.

You see, Diego Luna, who plays Captain Cassian Andor in Rogue One, really wants to touch Jabba the Hutt. He’s mentioned it in six separate interviews, which are collected and edited together by Twitter user @tolkienianjedi in an incredibly delightful and endearing supercut.

The continued call to touch Jabba, who almost certainly wouldn’t appreciate the gesture, is one of curiosity. Jabba is a puppet in his original theatrical appearance in Return of the Jedi, but appears as a CGI character in an added scene in A New Hope and during the prequel trilogy. There’s some foam involved with the creation of Jabba, but he looks slimy on screen. Like a rebel looking into a new lead, Luna needs to discover what Jabba’s skin feels like. He’s obsessed, he says in one clip.

In the video’s longest clip, Luna is asked by MTV’s Josh Horowitz whether he would rather French kiss Jabba the Hutt or punch an Ewok in the face. After getting an explanation of what French kissing is, Luna’s answer is an easy one.

“He’s an amazing character, come on,” he said. “I have it—it’s this big, the one I have—and he’s always there looking at me. It’s lovely. And the texture. I’m very curious to actually touch that texture.”

It might not be something fans thought about too much before now, especially since it’s been years since Jabba’s been on the big screen, but now we need to know. And what better way than to let the one leading the charge, Luna himself, have this dream realized?

After all, Luna’s character made it possible for the Rebellion to destroy the Empire. Disney and Lucasfilm, you know what to do.