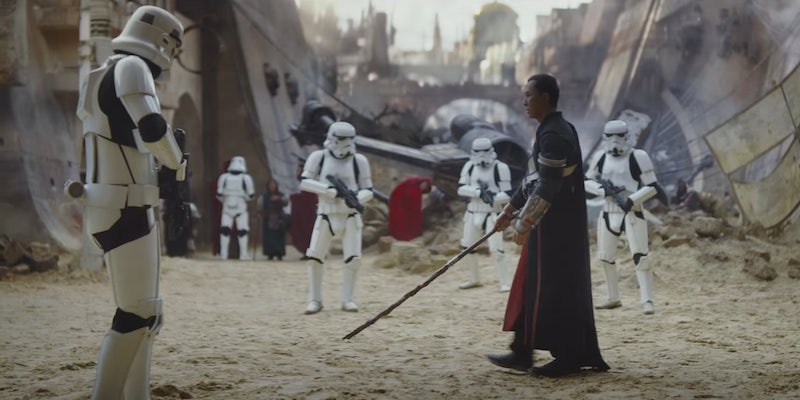 Darth Vader is confirmed for ‘Rogue One’ and other new details

They're unlike anything we've seen in 'Star Wars' to date.

Rogue One: A Star Wars Story will introduce us to the team of rebels who stole the plans to the Death Star, but it will also bring back an iconic Star Wars villain back into the mix.

A new cover story for Entertainment Weekly that goes behind the scenes of Rogue One confirms what many fans had already assumed or surmised: Darth Vader will return. Vader, as an important figure in the Galactic Empire, led efforts to get the Death Star plans back in the hands of the Empire while on the Death Star in A New Hope, and for many fans it made narrative sense to have him involved in some capacity. And it appears that Vader will be playing more than just a cameo role.

“Darth Vader kinda looms large over the plot even when he’s not necessarily on-screen because the new villain, played by Ben Mendelsohn, he’s trying to fulfill the wishes of the Emperor and he’s got kinda Vader looming in the background over his shoulder,” Entertainment Weekly’s Anthony Breznican, who wrote the cover story, told Good Morning America.

Rumors of Vader’s return have persisted for months with Birth.Movies.Death describing the role as not “the main antagonist but he will be working behind the scenes, pulling strings and will appear onscreen.” James Earl Jones, who’s provided the voice of Darth Vader for every major Star Wars film he appears in recently reprised the role in Star Wars Rebels, although he hasn’t been officially confirmed yet for Rogue One.

Entertainment Weekly has also listed descriptions for the main characters of Rogue One including Felicity Jones’s Jyn Erso, who Lucasfilm president and Rogue One producer Kathleen Kennedy noted “becomes a kind of Joan of Arc in the story,” as well as the other Rebels who join her mission and the lead villain of the film. The exception to this is Forest Whitaker’s character, whose name was revealed later Wednesday. He’ll portray Saw Gerrera, a character that first appeared in the animated series Star Wars: The Clone Wars and is referenced in the recent Star Wars novel Bloodline. He’s now leading a group of Rebel extremists that concern even the Rebel Alliance.

Here’s what we know about the rest of the crew.