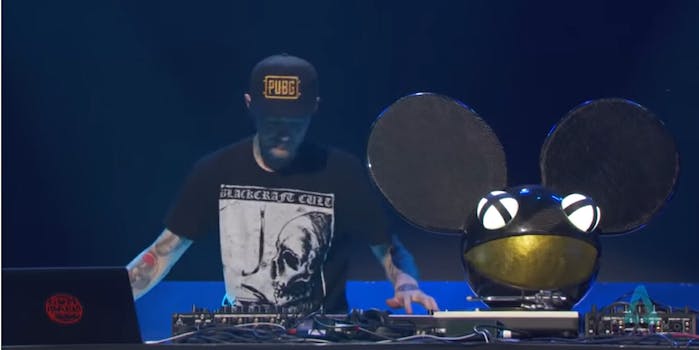 He has not denied the outburst.

Deadmau5 is done with Twitch.

The Grammy award-winning DJ deleted his Twitch account following a ban from the streaming platform. The ban came after Deadmau5, 38, whose real name is Joel Thomas Zimmerman, lost his temper during a match of PlayerUnknown’s Battleground, or PUBG. After he called another player a “fag,” Twitch reportedly slapped Zimmerman with a ban for “hate speech.”

Citing the platform’s perceived double standard, Zimmerman deleted his account completely. He did not specify what he meant by double standards, but fans have interpreted it to imply that Twitch is more lenient on women who break the rules with sexual content when it comes to its bans. That is, of course, completely unrelated to using hate speech.

The stream in which Zimmerman’s reported hate speech occurred has since been deleted, but reports say he called another player a “fucking cock-sucking stream sniper fag.” Zimmerman has not denied the outburst, but immediately following his ban criticized Twitch.

Stream sniping is a form of cheating in online multiplayer games. A stream sniper will watch a popular stream of a game they are currently playing and deduce where the streamer’s character is located. Then, they hunt them down. Stream sniping is a bannable offense in PUBG.

“I know who I am,” Deadmau5 reportedly wrote in the statement. “And I don’t have to fucking sit here and cry and defend my fucking self with the obligatory ‘I’M NOT THAT PERSON, I AM SORRY’ reflex. … While it was intended to insult a fuckin asshat who was being a fucking asshat, it wasn’t ‘directed at an entire group of people who have a sexual orientation that differs from my own’. Fuck off with that shit.”

Twitch has banned @deadmau5 for 'hate speech' for using a homophobic slur against a stream sniper in PUBG.

In a response on Reddit, deadmau5 says he will likely no longer partner with or stream on Twitch due to the platform's double standards on censorship and suspensions. pic.twitter.com/fRI9ogF64j

The popular DJ appeared to sign off of Twitch permanently.

Should deadmau5 be calling people f*gs in games? No

Should deadmau5 be banned from Twitch given the context and intent? I'd say also no

Twitch, not Twitter or YouTube, is quickly becoming the battleground platform for what can or cannot be said

In a follow-up to his original tweet, Breslau gave his thoughts on the matter. “Should deadmau5 be calling people f*gs in games? No,” he wrote. “Should deadmau5 be banned from Twitch given the context and intent? I’d say also no. Twitch, not Twitter or YouTube, is quickly becoming the battleground platform for what can or cannot be said.”

Users on Reddit appear to agree. “Just about every big streamer has been banned for really dumb shit and is at risk of having their whole livelihood taken away by Twitch,” Awkward_Bowler wrote. Others cited instances in which Twitch’s rules regarding banning seemed to follow no particular set of standards.

One standard that the DJ and gamer clearly violated, however, is the use of hate speech in-game. The rules are clear on that front.