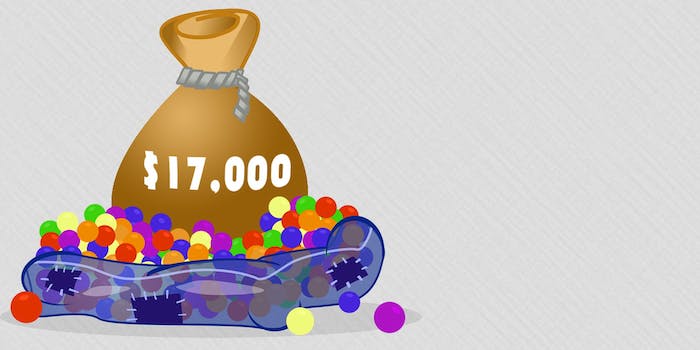 What would you do for an extra hour in the ball pit?

It may have started out as the world’s saddest piece of kid’s entertainment, but by the end of the weekend, the DashCon ball pit had become the Tumblr celebrity of the year.

“The greatest irony of DashCon is that they inadvertently created the only fandom that can destroy the Superwholock fandom on Tumblr,” wrote Tumblr user mattgorman Monday morning. “The Ball Pit Fandom.”

This weekend in Schaumberg, Ill., DashCon went off to fireworks—and not the good kind. The disastrous convention, which had boasted an anticipated crowd of 5,000 but had an actual crowd of anywhere from 500–1,500 people instead. And when those thousand or so unlucky attendees got there, they were hounded for $17,000 from DashCon organizers after the hotel reportedly demanded that the con pay its entire fee upfront. Considering that prices were already high and that the con had initially crowdfunded $4,000 from Tumblr to begin with, fans were none too happy, and Tumblr instantly exploded in controversy over the event. Things got even worse when the con saw multiple guests, including Welcome to Night Vale and Gingerhaze (who had to moderate her own panel because the moderator never appeared), walk out after the con proved unable to pay for their travel and accommodations upfront.

In Night Vale’s case, the crew walked before, not after, their panel was to take place. When that happened, the strapped con, unable to issue refunds for those who had paid extra for the Night Vale event, offered attendees, with a straight face, the only thing that seemed appealing at the time:

“An extra hour in the ball pit.”

What was the DashCon ball pit? Behold. 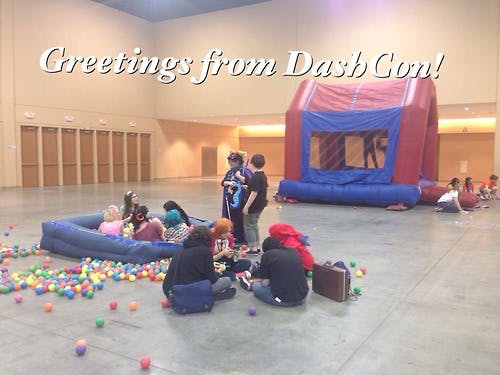 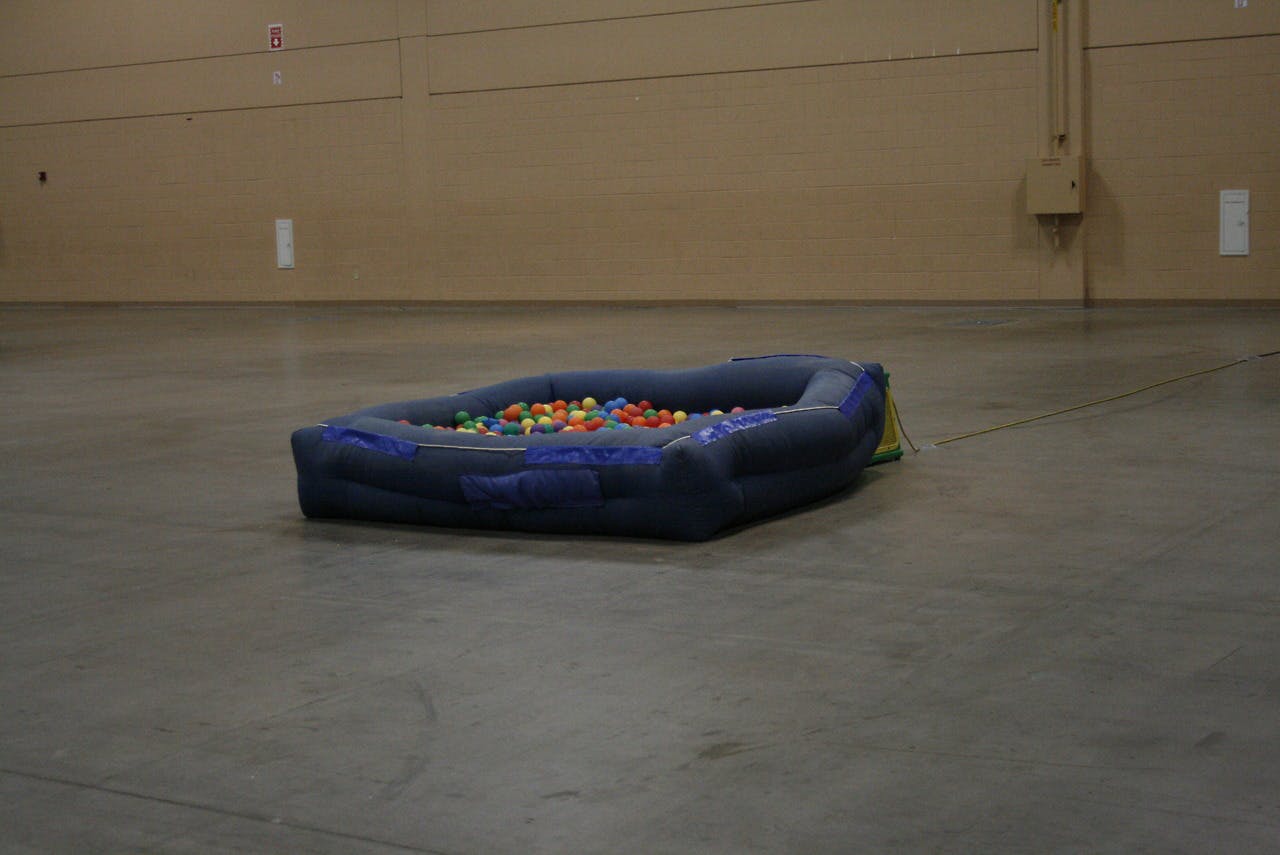 As weird and odd as “an extra hour in the ball pit” seemed to, well, everyone ever, it was more than Night Vale got:

@fart no!! no ball pit was ever offered to us. ugh.

It’s clear that no one on DashCon’s organizing team had any PR experience, because if they had, they probably would have spent less time sharing pictures of themselves crying on Twitter and predicted what came next: Tumblr, in the onslaught of intense discussion around whether DashCon was a scam or just incredibly mismanaged, took “an extra hour in the ball pit” and turned it to what is arguably one of the greatest memes in the platform’s history. 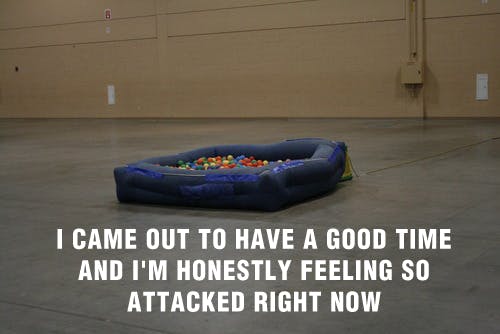 Amid the endless stream of jokes, fanart, Simpsons references, Portal references, fanmixes, and image macros that online Tumblr denizens created over the weekend, fans who were actually at the con converged on the ball pit, hoping to commemorate what had abruptly become a piece of Tumblr history. 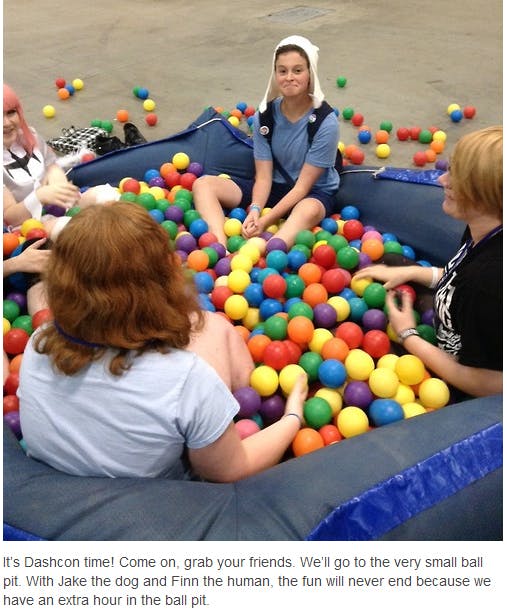 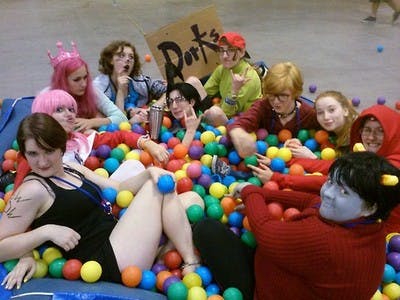 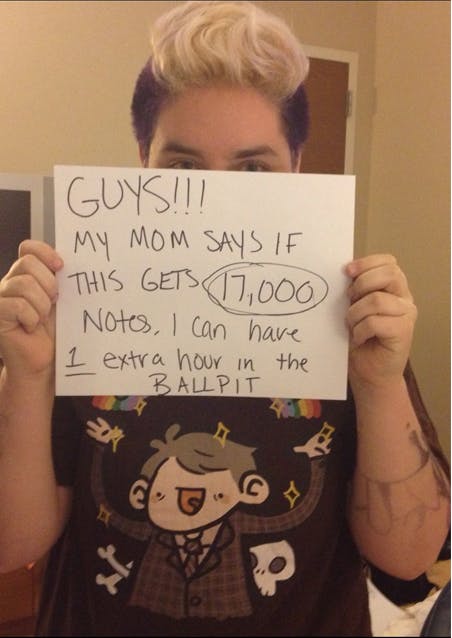 Within hours, the ballpit had made its way to Know Your Meme, and popular fandom AI Akinator had made its acquaintance: 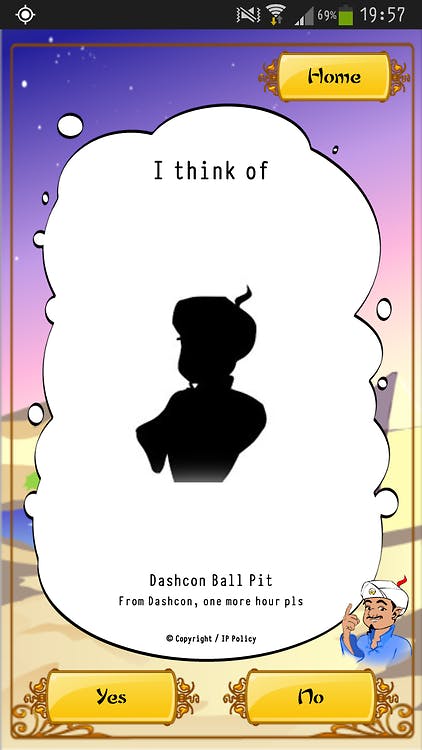 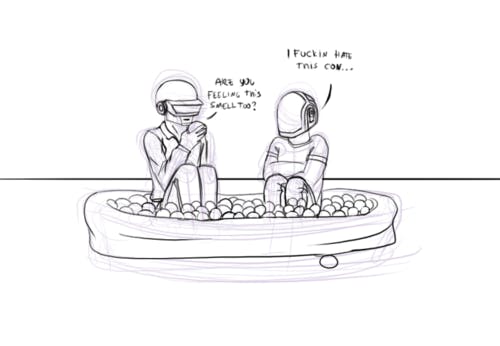 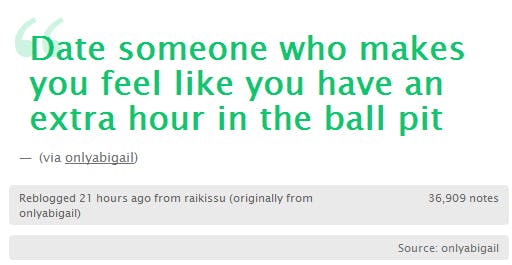 Numerous fandoms inevitably got in on the action. 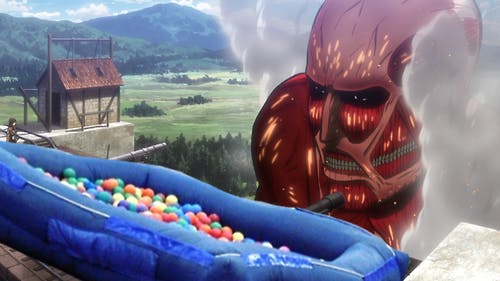 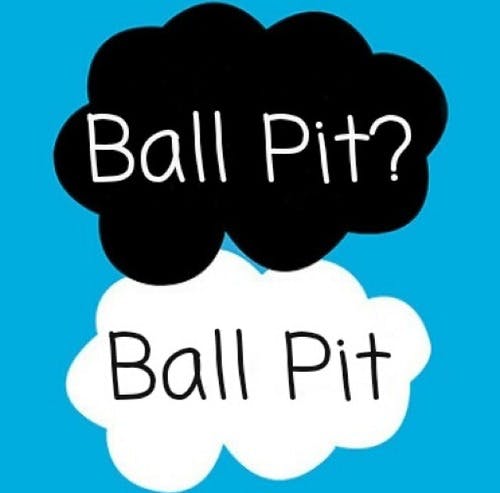 On Sunday, there were also plenty of World Cup jokes.

Even celebrities like Gail Simone and Orlando Jones commented on it.

A DashCon/Night Vale Haiku – Dogs are not allowed/Not allowed in the ball pit/Spare 17 K?

Between Friday and Monday Tumblr users got busy on YouTube, churning out ball pit fanvids…

Various Tumblr users made T-shirts on Redbubble and Zazzle: 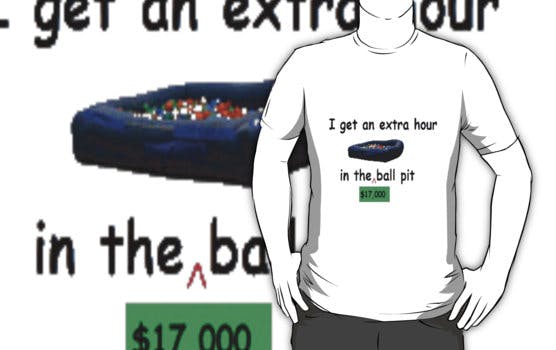 There were also at least three different Ball Pit simulators. One is courtesy of 4chan, playable here. 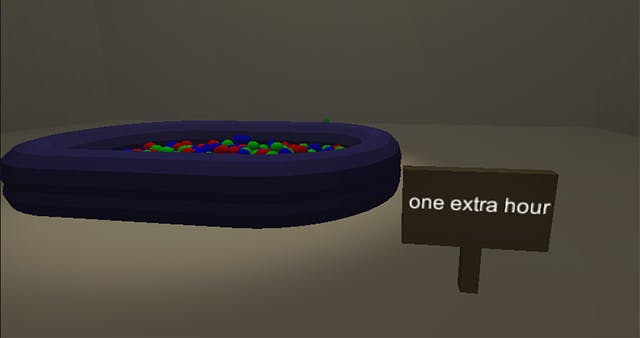 The other two, also playable with the Unity plugin, are available here and here. One found its way into yet another YouTube video:

The ball pit got its own parody Tumblr and its own ask blog.  Then, finally, in the middle of all the madness, this happened:

4Chan is taking credit for the ball pit’s demise; having previously gotten into a cross-platform trolling war with Tumblr, it looks as though they decided to infiltrate DashCon and share their, er, $17,000 opinion of Tumblr’s users. The culprit appears to be YouTube user Hebe Goldstein, who also trolled attendees by encouraging them to shout, “Free Palestine!” while filming them in the pit.

If that’s not enough cross-platform madness for you, the ball pit also racked up multiple Facebook pages, including I peed in the DashCon Ball Pit.

next time you’re dealing with someone who’s being a dick just say “who peed in your ballpit?”

And now that the infamous ball pit has been taken out, one enterprising individual is trying to sell it on Craigslist: 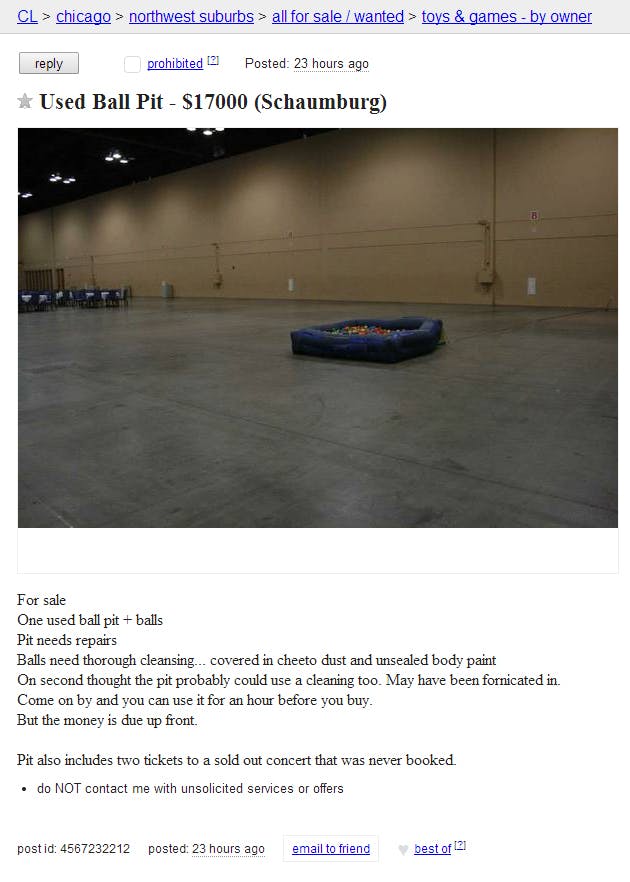 “It should just be a running joke for all cons to start providing ball pits,” wrote Tumblr user rykitsu on Monday.

While that may not happen, it looks like DashCon organizers are determined to move forward with plans for DashCon 2015. After issuing a tearful apology at the con post-mortem, they announced plans to “learn from [their] mistakes” for next year’s con, to the wild enthusiasm of the (admittedly diminished) crowd.

Let’s hope that plans for next year include a bigger ball pit. 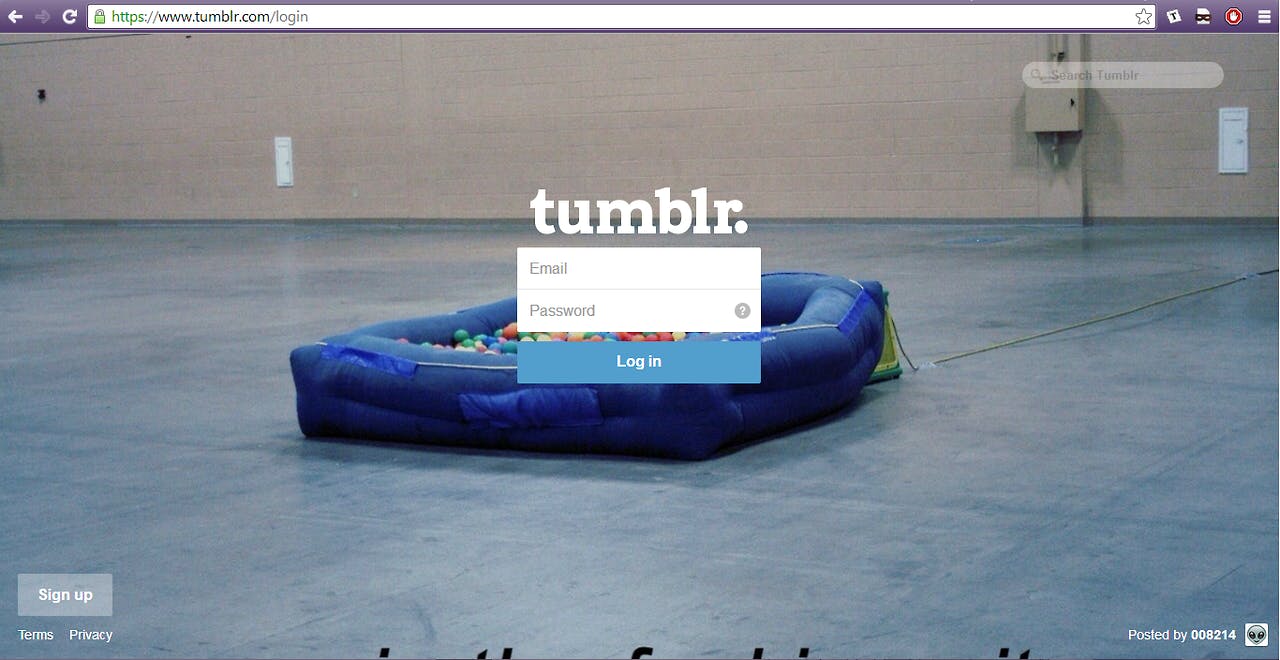